Auto components — Made in India for the world

The Indian automotive industry is the sixth largest in the world having deep forward and backward linkages with several key segments of the economy. 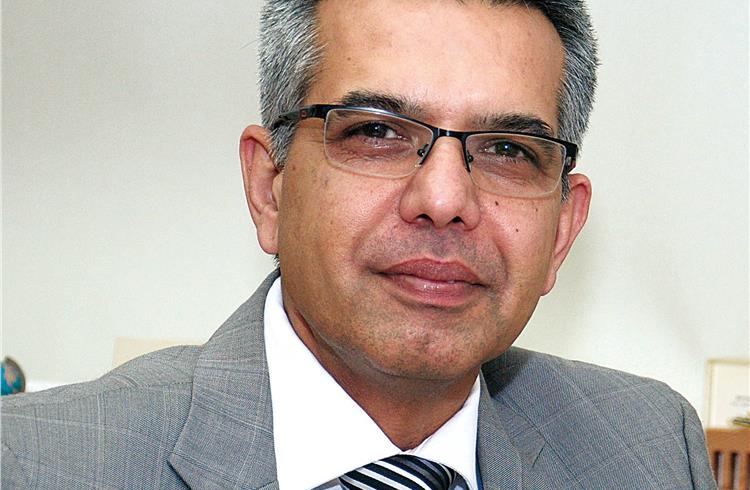 The Indian automotive industry is the sixth largest in the world having deep forward and backward linkages with several key segments of the economy. The industry has a strong positive multiplier effect which acts as a key driver of economic growth. As India rapidly emerges as a global sourcing hub for automakers across the globe, the Indian automotive industry is also fast transforming to meet the expectations and stringent norms of its diverse customers. The components industry grows in tandem with the vehicle industry and with the current ebullient market sentiments, it is expected to pick up in the second half of FY16 and beyond into FY17. It has already recorded close to 17 percent growth in exports in the first nine months of FY 2014-15, scaling US$ 8.42 billion. While the final data for fiscal 2014-15 is awaited, overall growth of the auto component sector is expected to be in the range of 8-10 percent. As an industry, we have envisioned a three-fold jump in the turnover of the sector by 2020 to touch US$ 100 billion, mainly driven by focus on high-quality products and cost-competitive manufacturing. We expect exports to be in the range of US$ 30-40 billion while turnover from overseas assets of Indian component manufacturers is expected to cross US$ 20 billion. 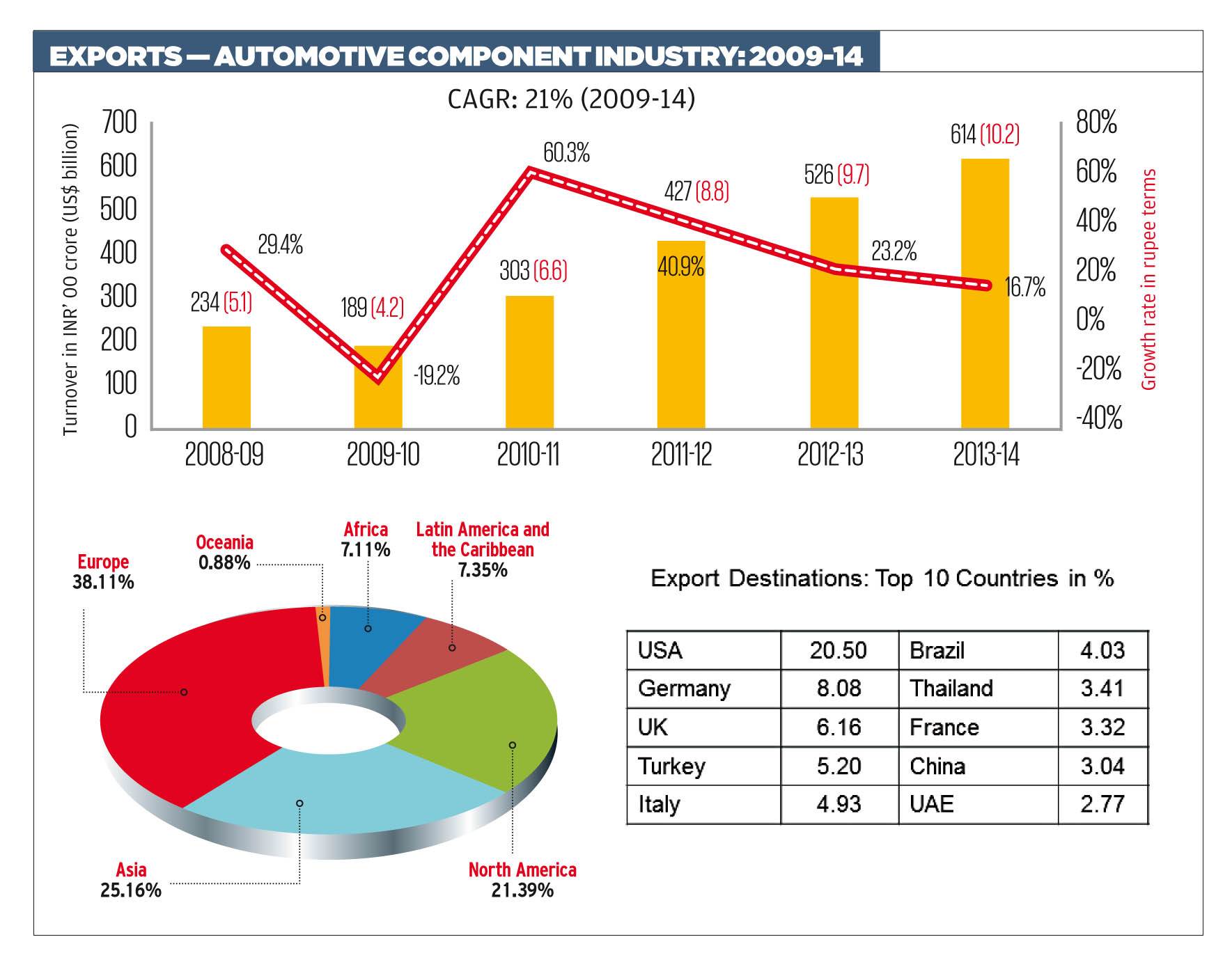 A favourable policy environment and the government’s efforts to improve ease of doing business in India coupled with positive measures announced in the Union Budget are expected to take the industry in the right direction. Some of the positive measures announced in the Budget include allowing 20 percent additional depreciation on new plant and machinery as against 10 percent, setting up of an electronic Trade Receivables Discounting System (TReDS) for financing of trade receivables of MSMEs to improve the liquidity in the sector and the intent to implement GST by next fiscal. Moreover, the Budget also announced enhancement of the time limit for taking CENVAT credit on inputs and services from six months to one year. That apart, reduction in rate of income tax on royalty and fees for technical service from 25 percent to 10 percent will enable technology absorption in the auto component.

Additionally, the recently announced Foreign Trade Policy 2015-20 is a pragmatic and progressive one. The component industry welcomes the focus given towards consolidation of various exports schemes in the policy as also the further simplification of procedures to help integrate India into the global value chain, improving ease of doing business index through online and e-governance interventions and reducing the transaction cost in international trade. It has also provided the much-needed framework to enhance export of goods and services as well as generate employment. Moreover, a significant number of tariff-lines of auto components have been benefitted under the new policy compared to the earlier one.

With a stable regime and progressive policies including those of states, we expect addition of newer auto clusters around the country.

INDIAN COMPONENT INDUSTRY'S DEFINING TRENDS OVER THE NEXT DECADE
In the coming decade, driven by needs of safety, fuel efficiency and sustainability, the Indian automotive industry will undergo a metamorphosis of sorts. The major trends that will define the automotive industry in the decade ahead are:

De-risking: To ensure long-term sustainability and growth and to reduce susceptibility of business to cyclical fluctuations, auto companies will consider diversifying into adjacencies such as defence, aerospace, oil and gas, railways and construction, among others.

Cost optimisation: Mounting pressures on margins would put cost optimisation high on the industry’s agenda, which they would approach through increased local sourcing, local manufacturing and by having multi-plant operations. The globalisation objectives would lead to companies widening their presence, not just within the domestic boundaries, but also across the global markets. The success stories of Indian companies who embarked on the acquisition route early on would encourage more auto players to aggressively focus on expanding their global footprint.

This has brought in a fresh round of inspiration and excitement within the manufacturing industry in the country. Several OEMs including Hyundai, HMSI and Hero MotoCorp have announced fresh investments or expansion plans in light of the ‘Make in India’ program. This will lead to further deepening of the automotive supply chain
in India.

That apart, Indian suppliers are well positioned to capture global opportunities – either through exports or overseas operations. Several pockets are attractive ‘where to play’ opportunities – both for existing components and new components arising from technology discontinuities, scaling  up operations and further improving quality, cost and delivery performance to remain globally competitive. However, this would require smart choices on the model to globalise and target investments in capability strengthening.

OPPORTUNITIES FOR ENGAGING WITH THE CHINESE AUTO INDUSTRY
The auto component industry in India today is well recognised globally for its frugal engineering and cost competitiveness. Findings from a recent ACMA study conducted with the support of the Union Ministry of Commerce reveal that a few Chinese OEMs are keen to source auto parts from India.

The Chinese vehicle industry is expected to grow at 7-8 percent, a notch higher than China’s projected GDP growth in the next few years. With the RMB having appreciated against the US dollar over the last couple of years and the Indian rupee having depreciated in the same period, Indian auto components have an advantage. However, there is a total lack of awareness about the competence and capabilities of Indian suppliers amongst the Chinese OEMs.

HOW TO SUCCEED IN THE GROWING AND COMPETITIVE INDIAN MARKET
For foreign players keen to explore opportunities in India, it is crucial to understand the local landscape and market dynamics that will ensure a long and profitable venture for them.

Study and analyse: The market and where the market opportunities might lie. For instance, new auto clusters or zones where the government is promoting and providing conducive opportunities to set up business.

Localise: ‘Made in India’ presents not only an advantage for Indian players but also to those who are mulling business opportunities with Indian auto component makers. Global players can partner with Indian firms who possess the local resources and combine it with
their global expertise to develop products and produce not only for the domestic market but also for the world.

Once achieved, growth in the automotive industry is imminent. Going forward, we envision India as a global automotive hub because of our inherent strengths of frugal engineering skills, cost advantage and quality benefits that India can offer to the rest of the world.