With its electric vehicle business, Tata Motors is on track to surpass USD 1 billion in revenue this year. 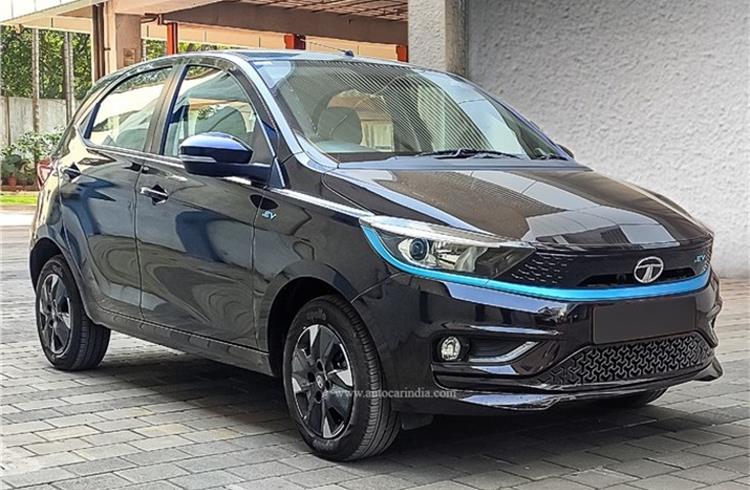 Led by the launch of the new Tiago.EV, Tata Motors, India’s largest electric car maker, is aiming to double its monthly EV volumes to about 8,000-10,000 units per month. Tata Motors is set to cross EV sales of 50,000 units annually in FY23, which means, it is on course for a billion-dollar revenue from its EV business in the next few months.

Our sister publication Autocar Professional learns that with the recently launched the Tiago EV as well as the Punch EV planned for 2023, Tata Motors is gunning for 1 lakh production of EVs in the next 12-18 months, which will lead to an EV penetration of over 15 percent for the company. If it manages to sustain the sales momentum, then the EV business could potentially generate about Rs 12,000 crore to Rs 15,000 crore of revenues – which is almost equal to the business its conventional car business generated just three years ago.

Within 10 days of announcing the Tiago EV prices, Tata Motors was able to secure over 20,000 bookings for its new entry-level EV. Already about 50,000 prospective buyers have registered their interest for the Tiago EV and about 23 percent of them are first-time car buyers.

Declining to share specific numbers on volumes or revenues, Shailesh Chandra, MD of Tata Motors Passenger Electric Mobility, told Autocar Professional that the new Tiago EV will democratise electric vehicles to a much larger customer base and the model has brought in a lot of new buyers for the company. “From where I am now, the potential is to easily double with the Tiago and the new products that are planned over the next couple of years. We are on an aggressive path of product introduction. With the new product introduction plan, the volumes will surely grow,” says Chandra.

EV plans
The company has already created a network of 4,000 charging stations in partnership with Tata Power, which is set to cross 10,000 stations in the next 18-24 months to support the increase in volumes. Of USD 1 billion raised by the company, $500 million has already been infused into the business, and the balance of $500 million will be ploughed in the coming 12-18 months as the company achieves certain milestones.

For the Ford factory in Sanand that it acquired earlier this year, the company is getting all the approvals in place before retooling the factory to accommodate both ICE and EV products. The plan is to start consolidating its manufacturing footprint in 18 months. The Indian electric vehicle is set to grow to 2 million by the end of the decade and Tata Motors wants to hold on to its leadership with new competition coming in.

“With 10 products, we are targeting a 25 percent penetration, with more models coming in, it could be higher too,” adds Chandra.

The company has been aggressively increasing localisation for its EVs and it continues to engage with multiple suppliers to secure its future sources for batteries and critical components. "We will work with multiple suppliers. With a diverse product portfolio, we want to ensure that the dependency is not concentrated with few sources," says Chandra.

While the volumes are growing multi-fold, the rising battery prices can pose a threat. With the inaugural pricing offer over, the company will increase the prices of Tiago EV. While the exact quantum of the price increase is yet to be defined, it could be in the range of Rs 30,000 to 35,000.

Chandra says the battery prices have gone up by 30-35 percent in the last six months, but are stabilising now. He confirmed that the Tiago EV prices will move up, but the exact amount will be announced shortly.