The industry holds immense scope for localisation and development of the Tier-II vendor ecosystem within India by leveraging economies of scale with government’s proposal of mandating six airbags. 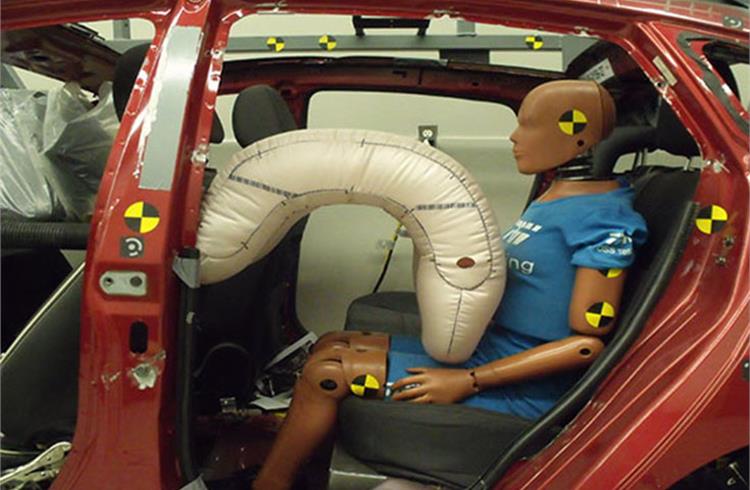 The key facilitator for this 2.5-3-times growth by FY2027 in the revenues of airbag suppliers in India is the anticipated regulatory push to implement six airbags in passenger vehicles sold in the country. While the government had earlier proposed this mandate to kick in from October 2022, it was, however, deferred by 12 months for all new passenger vehicle models, primarily on account of the lack of capacity at airbag manufacturers to supply to the OEM demand of almost 18 million airbags.

The government will now likely issue a new notification proposing mandatory fitment of six airbags in passenger vehicles from October 2023. “Considering the global supply chain constraints being faced by the auto industry and its impact on the macroeconomic scenario, it has been decided to implement the proposal mandating a minimum of 6 airbags in passenger cars (M-1 category) with effect from October 2023,” Union Minister for Road, Transport and Highways, Nitin Gadkari had announced in a tweet on September 29, 2022.

“We do not even have a capacity of six million units right now. The new guidelines call for a significant expansion of capacities as well as localisation of airbags and their associated parts as a lot of components are currently being imported,” an industry expert had told Autocar Professional earlier this year.

“It is impossible to cater to this kind of a demand explosion within a short timeframe, despite component makers’ willingness to invest into more capacities as per customer demand,” he had further added.

Leveraging economies of scale
According to the ICRA study, there is immense scope for localisation and development of the Tier-II vendor ecosystem in this space and increasing volumes could make this economically viable. It can improve margins through greater value addition and ease supply-chain challenges for airbag manufacturers. Airbag component manufacturing is part of the PLI scheme for facilitating increase in indigenous manufacturing. Given the potential for a sizeable increase in airbag volumes, most airbag manufacturers are in the process of localising key components.

“Capacity building in the next one year is critical to meet regulatory requirements in a timely manner. Several players have started undertaking capacity enhancements in the last 6-8 months to gradually scale up their facilities, and ICRA expects a capex in the region of Rs 1000-1500 crore in the next 12-18 months for capacity enhancements and localisation measures,” says Vinutaa S, VP and Sector Head, ICRA.

“The mandatory content per vehicle for airbag manufacturers is expected to rise from Rs. 3,000-4,000 currently to Rs. 8,000-10,000 by October 01, 2023. The average number of airbags per car sold is about three currently, and this is expected to increase significantly after the mandatory implementation of six airbags in every new car from October 1, 2023,” she adds.

Though the six-airbag mandate which has been uniquely proposed in India is a great business opportunity for safety system suppliers, there is a fear in the industry that the cost impact and engineering challenges in implementation would seriously hurt the growth of the passenger car market.

A major chunk of the country’s A- and B-segment cars, that hold the lion’s share of the price-sensitive Indian car market and are primarily offered with affordable mobility as their unique selling proposition, are understood to require a thorough re-engineering of their side-body structures, or in some cases, even a grounds-up development of their platforms, to be able to conform to the proposed mandate.

“The cost for OEMs could also increase further, depending upon the modifications required in the structural changes and deployment of additional sensors,” Vinutaa S adds.

Targeting key constituents
The airbag inflator makes about 50% of the total airbag cost, while cushion and other components form the remaining. The industry currently imports 60-70% of its components, primarily from overseas parents/joint venture partners, stemming from the lack of indigenous technological capability and absence of adequate volumes.

As per the ICRA study, unless there is adequate backward integration for the incremental airbags expected to be produced, the import content would only increase further going forward.

According to Suresh KV, president, ZF India, “Right now, we’re in the process of setting up an airbag inflator line at Trichy and it is slated to go onstream in the second quarter of next year.”

The joint venture entity - ZF Rane Automotive India – is a key supplier of airbags and seatbelts to Indian OEMs from its plants in Chennai and Trichy.

While seatbelts in its portfolio enjoy good localisation, in the range of 50-60 percent, airbags fall short in this regard. “Currently, localisation is not that high in airbags because the inflator itself is being imported,” KV had told Autocar Professional in an interaction earlier this year.

“With fabric and inflator being the two key components of an airbag module, they play a huge role in determining its cost structure and eventually, pricing. Local manufacturing will enable companies to improve their cost competitiveness,” he had said.

“The cost must come down with economies of scale, and productivity improvements too will play a big role. Though it is much improved compared to five years ago, the cutting and sewing of the airbag fabric still involves a lot of manual process. I am sure automation and artificial intelligence can play a vital role in enhancing productivity and in turn, lowering costs,” KV had remarked.