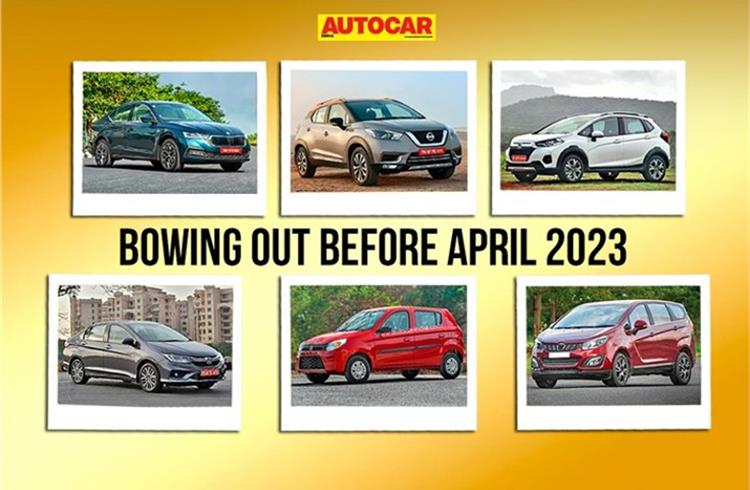 Come April 2023, the Indian Auto Industry will be met by a new set of emission regulations, called RDE or Real Driving Emissions norms. RDE can also be understood as Phase 2 of the BS6 emission norms, which will require all cars to achieve emission targets in real-world conditions, apart from also being tested in a laboratory environment on the MIDC (Modified Indian Test Cycle).

What makes Real Driving Emission (RDE) norms different?
RDE test figures provide a more realistic indication of the amount of emissions likely to be produced by cars, because they are tested in real traffic conditions with frequent changes in speed, acceleration and deceleration, as opposed to more steady conditions in lab tests. To comply with the stricter RDE norms, carmakers will have to upgrade their engines, which involves huge costs and may not be economically viable.

In that case, carmakers will have no choice but to discontinue certain models altogether, or at least specific variants of some models that make little business case for themselves. But before we get into what makes it economically unviable, here’s a quick look at all cars and SUVs that’ll no longer be available to buy from April 2023. 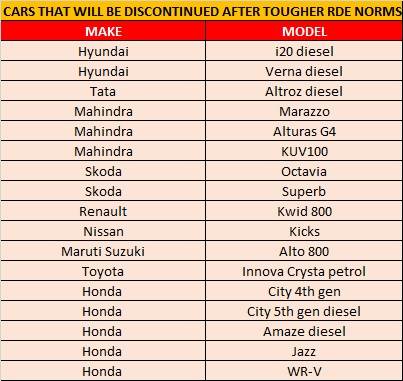 Diesel engines are expensive to upgrade to RDE norms
The case for not upgrading certain diesel engines to meet the RDE norms is twofold. First is that all diesel engines will have to shift to the more expensive SCR (selective catalytic reduction) method of emissions control, instead of the simpler and more cost-effective LNT (Lean NOx Trap) system that was employed by smaller capacity diesel mills to meet the current emissions standards.

Larger diesel engines, generally 2.0-litres and above, had already made the shift to the SCR system to meet the BS6 emission norms in 2020, and therefore are likely to clear the RDE norms as well. Meanwhile, smaller diesel units with lower emissions could, so far, get away with the LNT system. However, the cost of upgradation – and therefore the price delta – for compact diesel cars with smaller engines would be too high, relative to their sticker price, as compared to larger and more expensive diesels. And that brings us to our second point.

The demand for diesel in the hatchback and sedan segments has massively declined over the last few years. Even a few years ago, every premium hatchback and compact sedan had at least one diesel variant on offer. But now, for instance, diesel only contributes up to 10 percent of the i20’s sales while for Honda, diesel variants of the Amaze, City and WR-V combined make up for only 7 percent of the company’s total sales in India.

Clearly, there isn’t much financial viability in keeping diesel alive in a segment that is now predominantly petrol. This, therefore, spells the complete end of Honda’s diesel engines in India. However, it is interesting to note that Hyundai and Tata, along with Mahindra and Kia, will keep their small-capacity 1.5-litre diesel mills alive, but only for use in their SUV and MPV line-up. That’s because diesels still make up for a fair chunk of sales in SUVs, and being pricier than hatchbacks and compact sedans, they will be better able to justify the price delta that’ll come with the upgradation.

Other models at the end of their life cycle
While not as expensive a process as diesel, petrol engines will also require an upgrade. Therefore, It’s not just certain diesel models that have been affected, but carmakers will also be pulling the plug on several petrol-only models. This includes the likes of the Honda Jazz, Nissan Kicks, the fourth-generation City, the Innova Crysta petrol and even the likes of the Skoda Octavia and Superb sedans.

These particular models were either at the end of their lifecycle or were too slow-selling to justify the cost of upgrading to meet the RDE norms. Models such as the Kicks, KUV100 NXT,  WR-V and Marazzo barely sold a few hundred units on a monthly basis, while others like the City Gen-4 and Jazz were well past their lifecycle and, with no updates in the pipeline, are being discontinued for good. Lastly, for models like the Alto 800 and Kwid 800, it's about consolidating the line-up to the 1.0-litre engine rather than keeping a low-demand 800cc engine alive that isn't used by any of their other models.