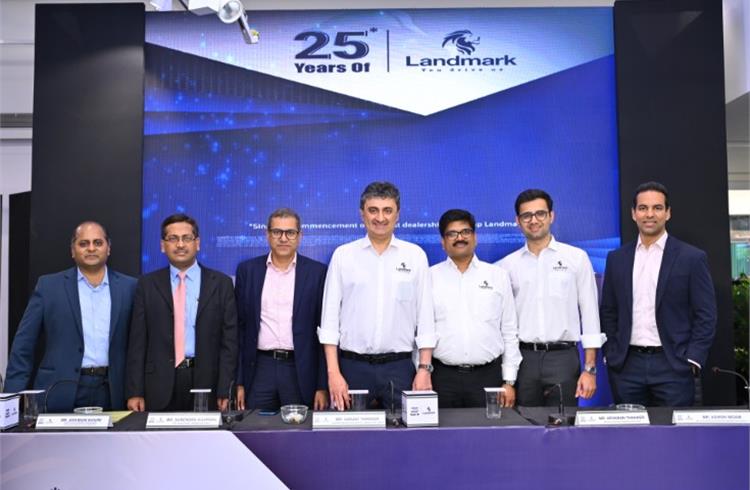 Landmark Cars Limited, a chain of luxury auto dealerships, will begin its initial public offering (IPO) on December 13 in light of the 10-12% CAGR growth that is predicted for India's premium auto sales over the following five years. In addition, a CAGR of 14–15% is forecast for the even more niched luxury market.

According to Sanjay Thakker, chairman of Landmark Cars, a portion of the money raised would be employed to pay back the working capital loan in addition to further expanding in its business domain. " We aim to be at the forefront of new developments and technology through strategic acquisitions, technology investments," said Thakker.

The company, also known as Group Landmark, is active all across the automotive retail value chain, including the sale of new cars (for both personal and commercial use), after-sales service and repairs (including the sale of replacement parts, lubricants, and accessories), and the procurement of used cars for personal use. Additionally, it is also involved in the sale of financial services provided by outside companies through its dealerships, including financing for cars and insurance policies.

Landmark Cars which commenced its business in 1998 with launch of the Group's first dealership for Honda in Ahmedabad currently operates 112 outlets, comprising 59 sales showroom and 53 after-sales service and spare outlets spread across 32 cities. Mercedes-Benz, Honda, Jeep, Volkswagen, Renault and BYD are currently represented by the company. Around 30% of Landmark Car's total outlets have been formed using the acquisition model in order to spread into the uncharted territories.

Upward trajectory for premium car segment
It is crucial to take the development into account in light of industry market trends that show a 9% CAGR in the mass market's decrease. In contrast, the market for luxury cars grew quickly over the previous five years, with a CAGR of 8%. Today, the mass market holds a 37% portion of the market, while the premium segment holds 62%. The luxury market share, meanwhile, is a paltry 1%. Landmark Cars, for its part , is aiming to have a greater proportion of premium and luxury cars in its portfolio and has no plans to enter the mass market or the two-wheeler industry.

The average selling price of small cars is anticipated to rise by 40–50% by FY2027. It is predicted to increase by 85–90% and 6–70%, respectively, for large automobiles and SUVs. The margins in each segment increase relatively as the price point rises.

Stable revenue stream from after sales
As per the Landmark Car's top leadership team, during the fiscal 2022, the revenue contribution from sales of Volkswagen, Honda, Jeep, Mercedes and Renault brands of vehicles were Rs 220 crore, Rs 374 crore , Rs 556 crore , Rs 525 crore and Rs 242 crore respectively. Also, Landmark Group which sells a wide range of products from commercial vehicle giant Ashok Leyland had a total sales of Rs 387 crore during the same period. The company did not specify about the sales from BYD- the world's largest EV maker with whom it recently signed a letter of intent for sales of its vehicles.

Thakker highlighted that even as pandemic, global recession or cyclic slowdown may hamper the sales of new cars, what has kept Landmark Group growing is its diversity of offerings.

Within it, the dealership industry's after-sales service area has a high margin and significantly boosts overall dealer profitability. In terms of numbers, the after-sales services account for 58–63% of a dealership's earnings from the compact car market. Similar variations exist for luxury vehicles, which can range from 63-68%. The after-sales sector of the commercial vehicle industry (CV) makes up 45–55% of the total. For Landmark Group, the after sales service contributed about 19.72% to the company's revenue during FY22, with the average revenue for each vehicle being Rs 21030. " Stable revenue stream from after sales contributes to high margins at each dealership thereby mitigating industry cyclicality" said Thakker, before adding that his company serviced an average of 14 vehicles for every new vehicle sold in FY2022.