Business executive-turned-mayor Street was in India recently to lead a delegation to lobby with Indian OEMs for setting up businesses in the Midlands in the backdrop of ongoing FTA negotiations between the two countries.

By Shahkar Abidi and Ketan Thakkar 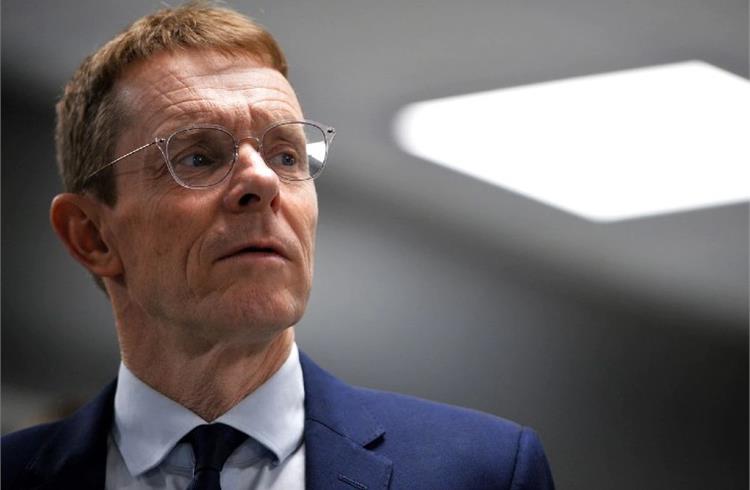 Even as India-UK talks on the free trade agreement (FTA) continue under the leadership of UK’s new Prime Minister Rishi Sunak, observers are confident that it is likely to get finalised by this fiscal year. Andy Street, who is the mayor of West Midlands, UK, believes that both countries can collaborate to benefit from the China Plus strategy.

"The collaboration can help in leveraging demand from China plus strategies adopted by several global companies," said Street, who was recently in India leading a trade delegation of business and political leaders from the UK’s West Midlands to build on the ongoing negotiations for a new FTA between India and the UK.

The delegation, which met with many of India's leading OEMs, elite educational institutions like IITs, lawmakers, and other stakeholders across the country, claims to have sensed a great deal of optimism towards making the bilateral relationship between the two countries successful.

The team visited Indian companies that already have presence in the UK like Mahindra & Mahindra (M&M). The Mumbai-based automaker operates an automotive research centre not far from Coventry. M&M has also revived the iconic BSA motorcycle brand through Classic Legends after the motorcycle maker ceased production in 1973. The first motorcycle model from the revived company is the retro-themed 650cc Gold Star that is currently only expected to be manufactured in India.

A section of the delegation also met top executives from TVS Motors close to Chennai and took a tour of the company's R&D centre and electric vehicle facilities, which are home to many graduates from WMG -- a UK-based research and education group founded in 1980 that combines collaborative research and development with education programmes working in applied science, technology and engineering with University of Warwick.

In April of this year, TVS Motor announced a massive additional investment of £100 million in Norton Motorcycles, also an iconic British 2-wheeler brand. Some of these investments, according to Sudarshan Venu, Joint Managing Director, TVS Motor Company, have already been made, resulting in the construction of a facility and the impending launch of the V4 SV and 961 Commando models that have been redesigned and reengineered. It is anticipated that over the next three years, this will generate 250–300 direct jobs and another 500–800 indirect jobs throughout the supply chain.

"You can see how the alliance really played out there," Street, the former head of retailer John Lewis Plc, said.

Street emphasised that the future partnership will be centred on Indian mobility companies conducting R&D in the UK and bringing this back to India to benefit from scale economies and pre-existing manufacturing expertise. Businesses like Tata Motors, Mahindra & Mahindra, TVS, and Ola, which have operations in the West Midlands, have found success with this model.

Street went on to explain that one of the drivers of West Midland's success as an attractive investment destination for Indian auto companies can primarily be attributed to the legacy of Lord Bhattacharyya, who spearheaded the initiative to develop Warwick Manufacturing Group (WMG), an industry based collaborative research and education program.

When questioned if they have been able to extract any further commitment with regard to investments in West Midlands by Indian companies, another member of the delegation quickly added that the West Midlands had assisted TVS Motor in obtaining funding from the UK government. According to Street, "we believe that if the free trade agreement can proceed, there is potentially billions of dollars of upside."

Indian companies reviving the Brit auto brands
India is the UK’s second-largest source of investment in terms of a number of projects, and the West Midlands has in its portfolio, a significant portion of Indian FDI that was brought into the UK. West Midlands is also home to some of the largest Indian automotive majors, including Tata Motors, Jaguar Land Rover, TVS, Mahindra & Mahindra (M&M), and others, especially around R&D and future mobility.

West Midlands has been able to attract 59 FDI projects between 2011 and 2020, accounting for 13 percent of all projects and the highest regional share after London.

As per Street, roughly about 90 percent of exports from the West Midlands to India happen in the transportation and machinery categories, which include certain vehicles such as JLR and even JCB vehicles, some of which get imported. "And that's why it's so important to both sides of this equation," he continued. "Obviously, the automotive sector is really important. So we have current proposals around battery manufacturers, of course, and what we're saying is that we will put very substantial sums of money on the table, whether in land values, transportation connections, or skills development, to help secure battery manufacturers so we can put that region.

Regaining the lost position
Despite being at the forefront of the global automobile industry's development, the United Kingdom was overtaken by others in the second half of the 20th century. The automobile industry, however, has experienced a revival in recent years.

Now that the UK is moving toward electrification, policymakers and other industry stakeholders see a chance to make up lost ground by making the highly qualified talent needed by the auto industry and other companies easily accessible. The region's abundance of educational institutions and research and development (R&D) facilities is beneficial to the cause. Additionally, it has a strong ecosystem for the automotive sector, especially in light of the new mobility era. The current focus is on encouraging the existing businesses to increase their investments while also inviting in new businesses to the area. Street concludes, "We're trying to rekindle that brilliant past."

Incentives offered by UK
The UK government is to launch a £1.4bn fund to attract more overseas investment into the UK economy, particularly in sectors such as life sciences and electric vehicle production.

The UK government also wants to make it easier for foreign companies to move to the country through new residency rules, to bring it in line with countries including Canada, New Zealand and Switzerland, and is expected to launch a consultation.