The EV SUV will be assembled at Volvo’s facility in Hoskote near Bengaluru, making it India's first luxury EV to be locally assembled. 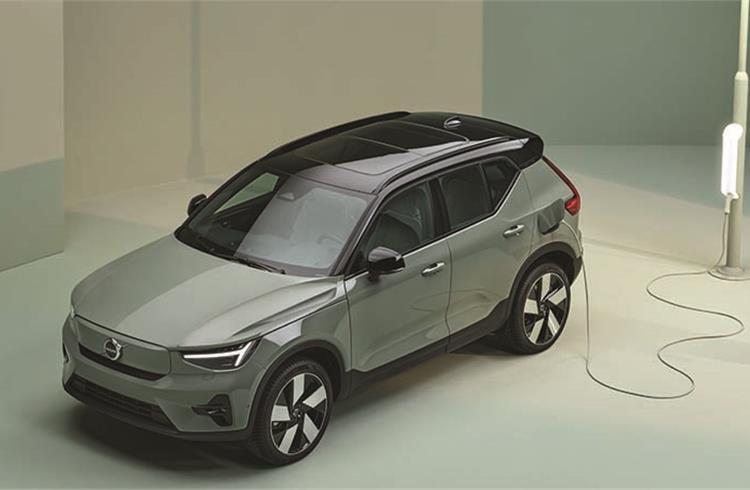 With a claimed range of 418km on the WLTP cycle, the XC40 Recharge is available in India in the higher-spec ‘Twin’ version, which has two electric motors – one on each axle producing 408hp and 660Nm of torque. This makes it almost twice as powerful as the petrol-powered XC40 and comparable to the larger and more expensive Audi e-tron 55 Quattro. All that power gives the XC40 Recharge a brisk 0-100 time of 4.9 seconds, however, the EV is 400kg heavier than the petrol model, weighing in at 2,188kg.

“The launch of the XC40 Recharge and its assembly at our Bangalore plant further reinforces Volvo Car’s long term vision and commitment to India and the Indian consumer. We are happy that the wait is over for our loyal consumers who have long wanted an EV with the hallmark quality and safety that Volvo is globally known for. Range upto four hundred plus kilometre of the XC40 Recharge, on a single charge is an added attraction." said Jyoti Malhotra, Managing Director, Volvo Car India

Feature-laden EV
In terms of features, the XC40 Recharge borrows infotainment and telematics from the facelifted XC60, and that means a sharper new set of digital dials and the new Android-based infotainment system. The driver gets direct access to Google Maps and Assistant, and a number of apps from the PlayStore with the help of an onboard e-SIM.

How it compares with other EVs
Priced at Rs 55.90 lakh, the XC40 Recharge sits between another luxury EVs like the Mini Cooper SE on one hand and the BMW i4 and the Kia EV6 on the other. The XC40 Recharge will also take on the Hyundai Ioniq 5, which will be launched next year and will also be locally assembled.