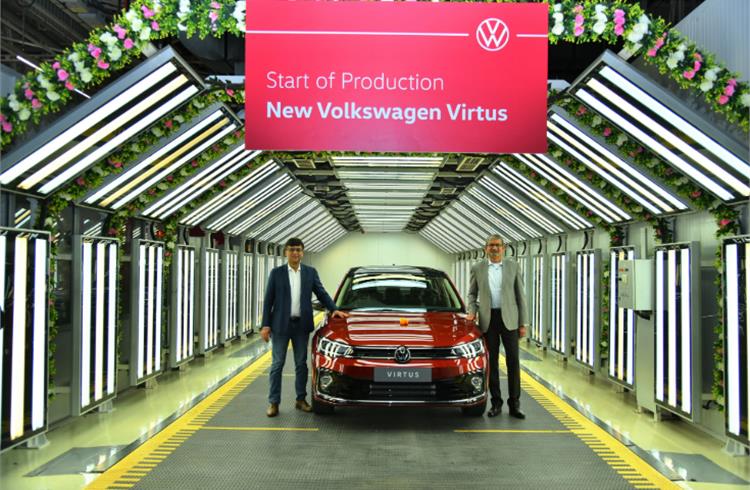 The Virtus is built on Volkswagen Group’s MQB-A0-IN platform and comes with up to 95 percent gross localisation, giving the company a chance to position it well among competing brands and eye up to 15 percent segment share in the midsize sedan category.

The car will rival the likes of the Honda City, Hyundai Verna, Maruti Suzuki Ciaz, and its recently-launched cousin – the Skoda Slavia. However, the Virtus will offer a differentiated styling compared to the Slavia and a different cabin experience.

Volkswagen will offer the Virtus with features such as a 10.0-inch touchscreen infotainment system, a digital instrument cluster, single-pane sunroof and six airbags. It will come with two powertrain choices – a 115hp, 1.0-litre, three-cylinder TSI petrol engine and a 150hp, 1.5-litre, four-cylinder, TSI mill. A six-speed manual transmission will come standard, while the 1.0 TSI will get an optional six-speed torque-convertor automatic, with the 1.5 TSI getting a 7-speed DSG option.

Volkswagen India had commenced bookings of the Virtus after its global unveil on March 8, and is expected to launch the car in end-May.

According to Piyush Arora, managing director, Skoda Auto Volkswagen India, “With the start of production of the New Virtus at our Chakan facility in Pune, we have successfully completed our commitment of launching two new products under the India 2.0 project based on the MQB-A0-IN platform for the market under the Volkswagen brand.”

“The Virtus is an unparalleled offering that brings in the newness and excitement in the premium midsize sedan segment. The overwhelming response received at the World Premiere has further driven our confidence,” added Ashish Gupta, brand director, Volkswagen Passenger Cars India.