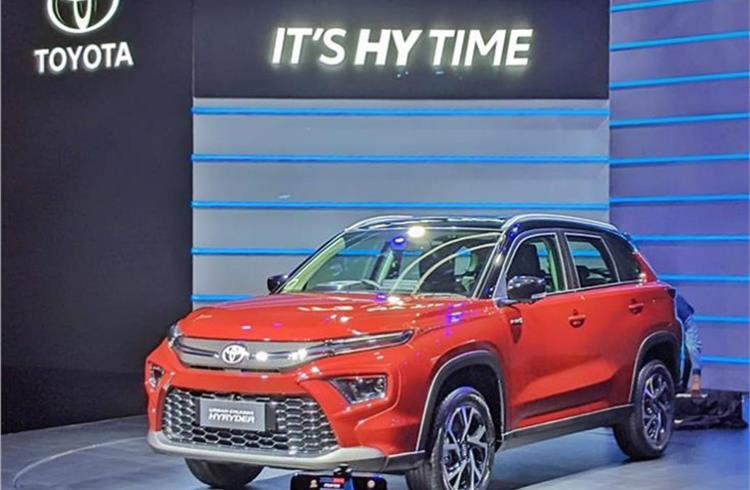 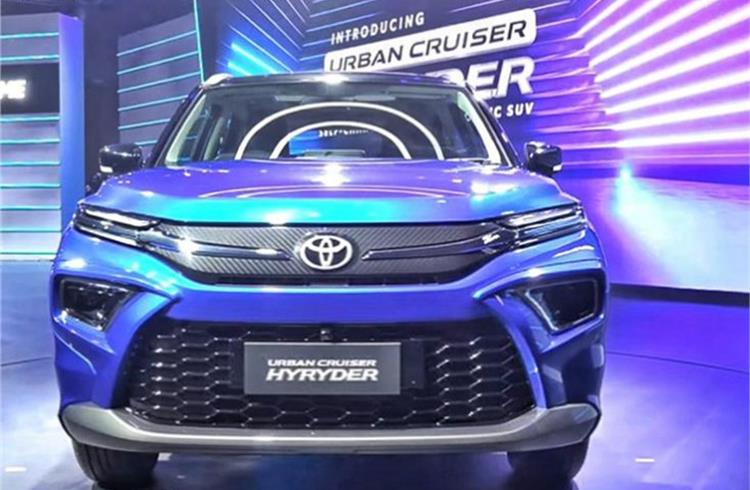 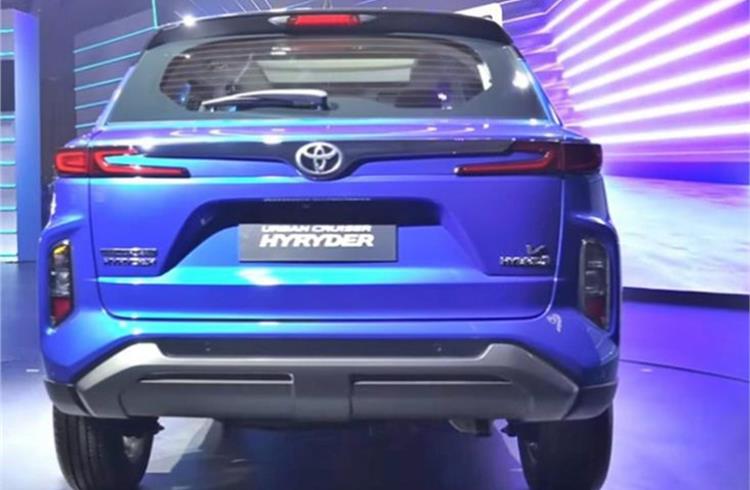 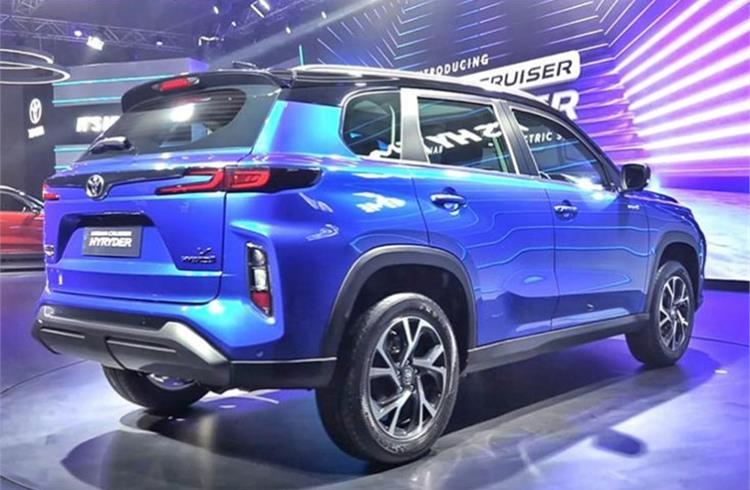 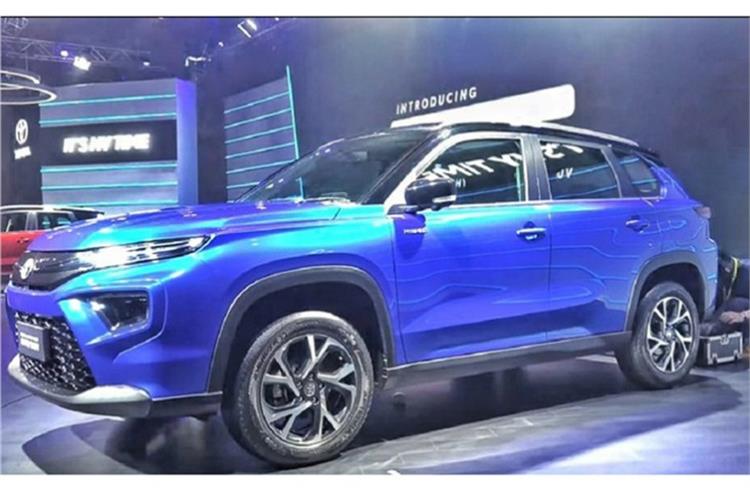 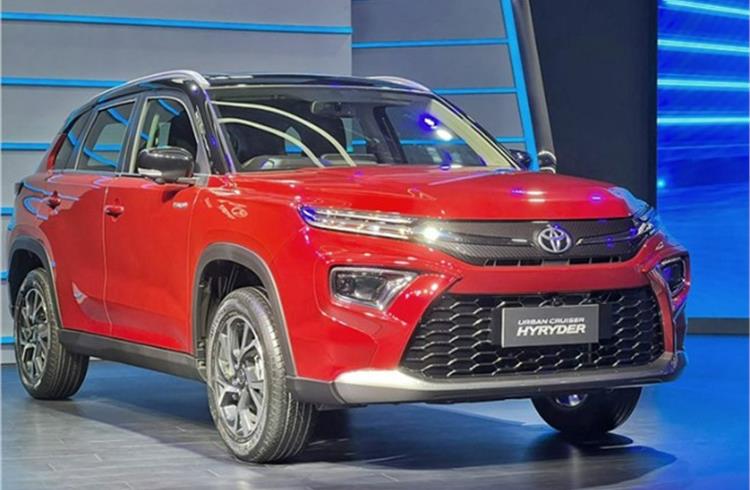 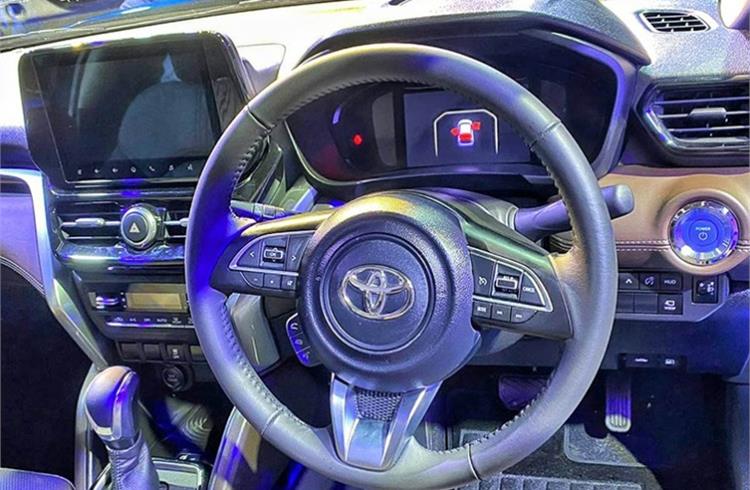 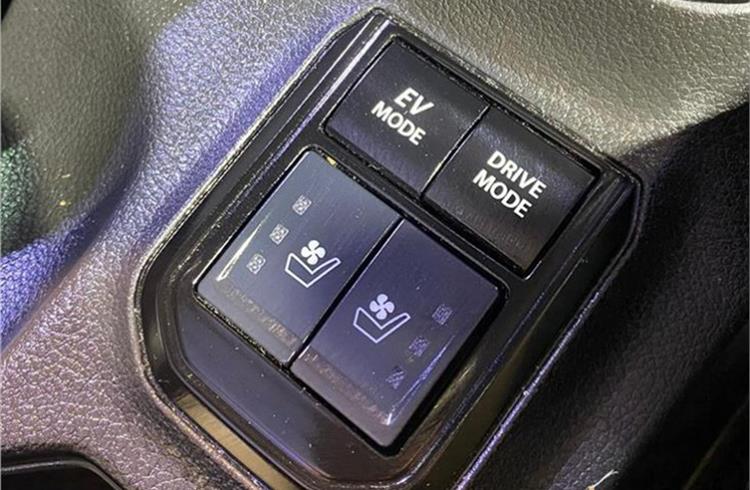 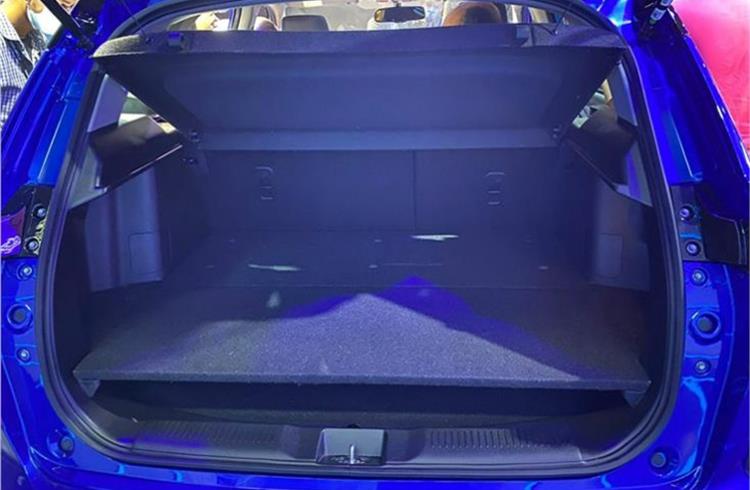 After a series of teasers, Toyota has finally unveiled the Urban Cruiser Hyryder SUV, its first midsize SUV for India that has been built jointly with Maruti Suzuki. The Hyryder comes with strong and mild hybrid powertrain options, and even AWD on some variants.

The new SUV will go on sale next month. Bookings are officially open both at Toyota dealerships and online, for an amount of Rs 25,000.

Hyryder: Inside and outside
Now revealed in full, the Urban Cruiser Hyryder gets fresh styling with some bits that mimic newer Toyota SUVs sold overseas. On the outside, the Urban Cruiser Hyryder gets double-layer daytime running lamps that merge into the piano finished 'Crystal Acrylic' grille. There’s a chrome strip that extends from one corner of the grille to the other which divides the LED daytime running lights into two layers. The SUV also features sporty front bumpers with a tall airdam flanked by large full-LED headlamps. 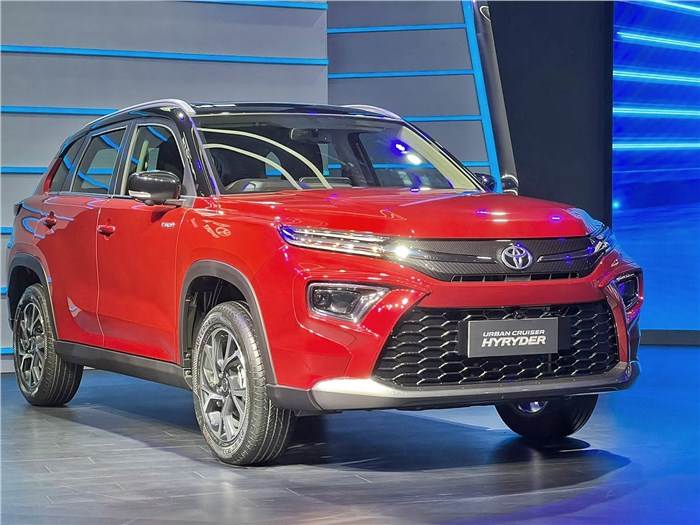 On the side, the strong hybrid models of the Hyryder get the prominent Hybrid badging on the doors – below the wing mirrors – similar to the full hybrid Toyota models sold abroad. As reported earlier, the Hyryder will also have a Maruti Suzuki version that will go on sale a little later. Expect both models to have common styling on the exterior and interior.

At the rear, the Toyota Hyryder SUV features slim C-shaped tail-lights that extend on to the tailgate with dual C-shaped parking lamps. A prominent chrome strip runs from the centre and merges into the tail-lamps, which also houses the Toyota logo. 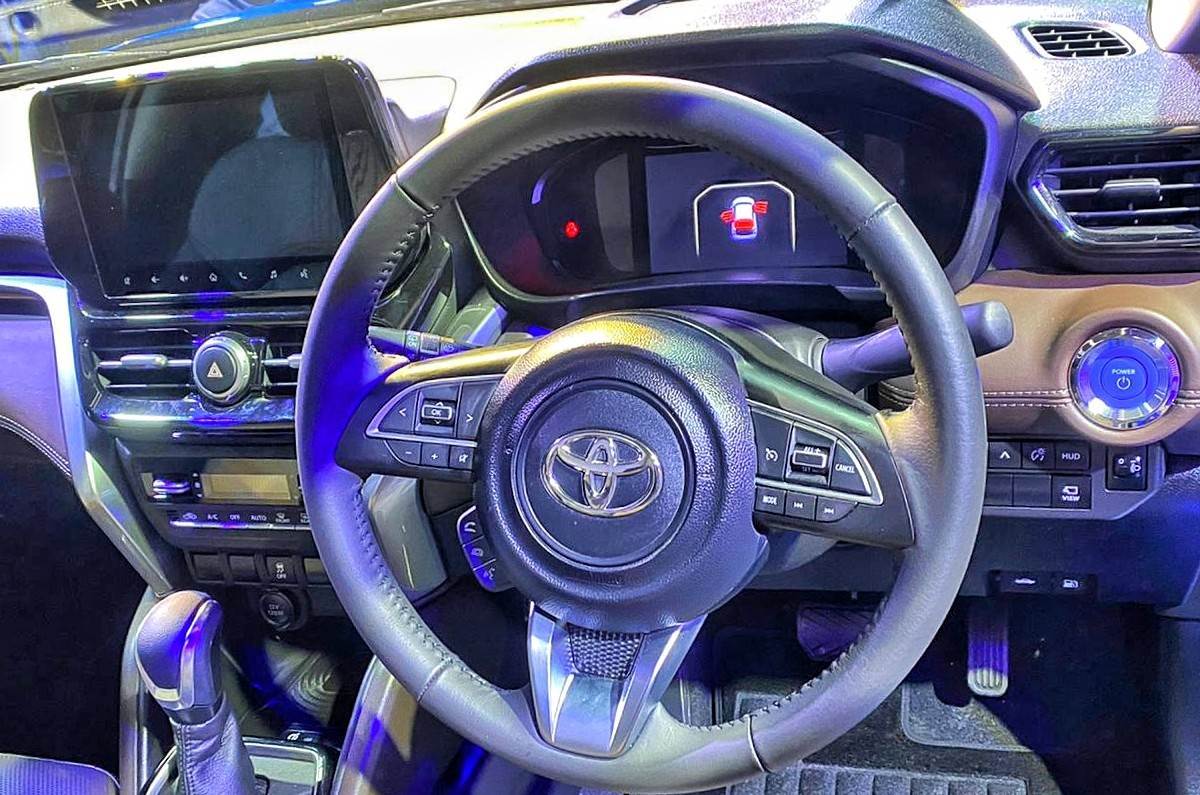 On the inside, the Hyryder’s dashboard layout has a similar layout as on the recent Maruti Suzuki and Toyota models like the Baleno, Glanza and the new Brezza. The dual-tone interior gets padded leather on the dash and looks upmarket, with some chrome and soft touch materials running on the door pads as well. Toyota has also gone with a brown and black theme for the interior, in line with the latest trend – as seen on SUVs like the Jeep Meridian – which not only looks great, but also hits the spot because it won’t soil easily.  The full hybrid versions will come with a dual tone interior set-up while the mild-hybrid range will get all-black interiors.

There are some common bits that will be shared with Maruti Suzuki products like the AC controls, AC vents, and even the 9-inch touchscreen infotainment system, which Toyota and Maruti Suzuki have developed together. The steering wheel also seems to be sourced from Maruti Suzuki – the same unit that sees duty on the Baleno, Glanza and a few other offerings. The Hyryder will also come with connected car tech. 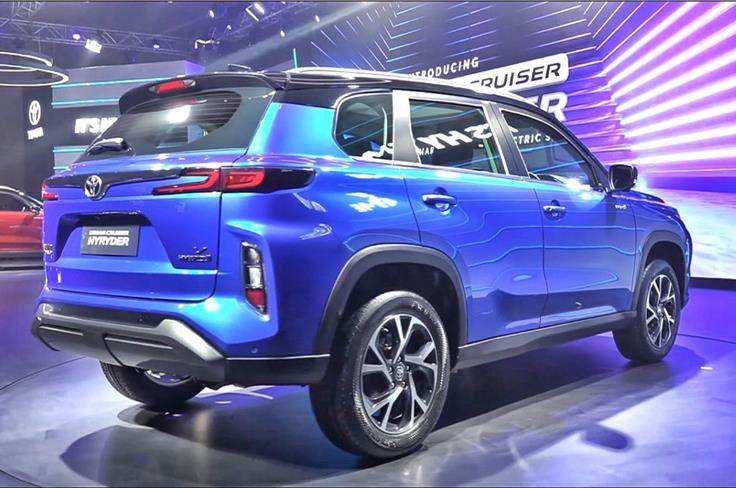 The Toyota Urban Cruiser Hyryder features Toyota's 1.5-litre TNGA Atkinson Cycle engine that produces 92hp and 122Nm of torque. It has a 14:1 compression ratio and a temperature and pressure control to help achieve a thermal efficiency of 40 percent, making it efficient on its own. The engine is paired to an electric motor that makes 79hp and 141Nm of torque. The hybrid power plant produces 115hp of combined power. It is paired to Toyota's e-drive transmission.

It features a high-density power control unit that can control more than 100A of current. It features vertically arranged transistors and an efficient cooling system enables transistor switching up to 10,000 times a second. 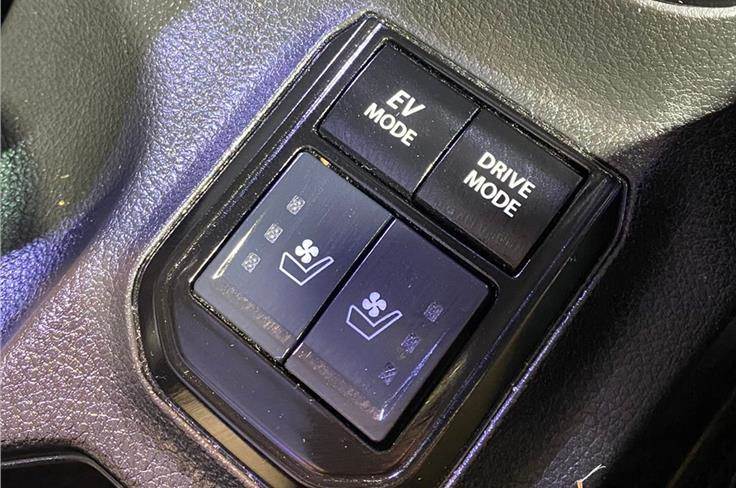 The hybrid system on the Toyota Hyryder is paired with a 177.6V lithium-ion battery. The Urban Cruiser Hyryder boasts of an electric-only range of upto 25km, and Toyota says that in our conditions, the hybrid system can cover 40 percent of the total distance and 60 percent time in pure EV mode. The overall efficiency of the Urban Cruiser Hyryder Hyrbid under test conditions is expected to be in the region of 24-25kpl, which will make it best in class.

Toyota is also offering the Neo Drive engine with the Urban Cruiser Hyryder. It is essentially Maruti Suzuki's 1.5-litre K15C mild-hybrid power plant with Integrated Starter Generator (ISG), which is also found on Maruti Suzuki models like the new Brezza, XL6 and the Ertiga. It makes 103hp and 137Nm of torque. The engine will be paired to either a 5-speed manual or an optional 6-speed torque converter automatic gearbox. 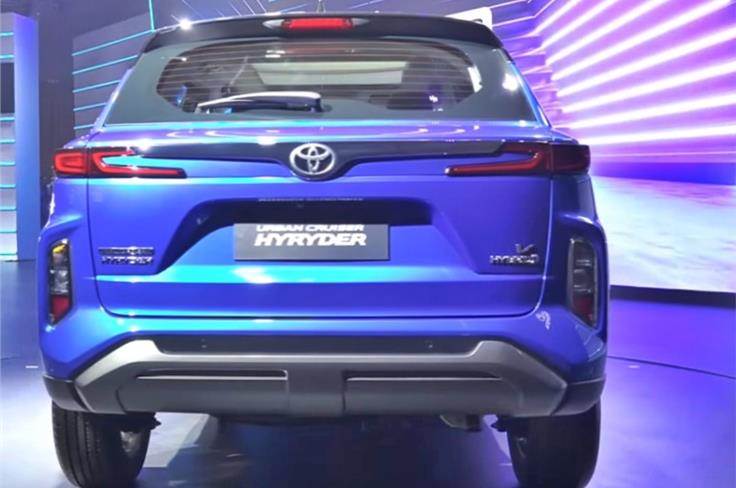 Expected pricing, launch timeline, rivals
Toyota will announce pricing for the Urban Cruiser Hyryder sometime next month, and the Creta-rivalling midsize SUV will be built at Toyota’s Bidadi plant in Karnataka. The model will also be built for export purposes. The Hyryder will go on sale first, followed by Maruti’s version of the midsize SUV. Toyota will offer a 3 year/1,00,000km warranty, which can be extended to 5 year/2,20,000km. The carmaker is also offering an 8 year/1,60,000km warranty on the hybrid batteries. Toyota is offering seven single-tone and four dual-tone exterior paint shades on the Hyryder.

Key rivals to the Toyota Hyryder include the Hyundai Creta, Kia Seltos, Volkswagen Taigun and Skoda Kushaq, as well as Maruti’s version of the Hyryder that will go on sale this festive season.