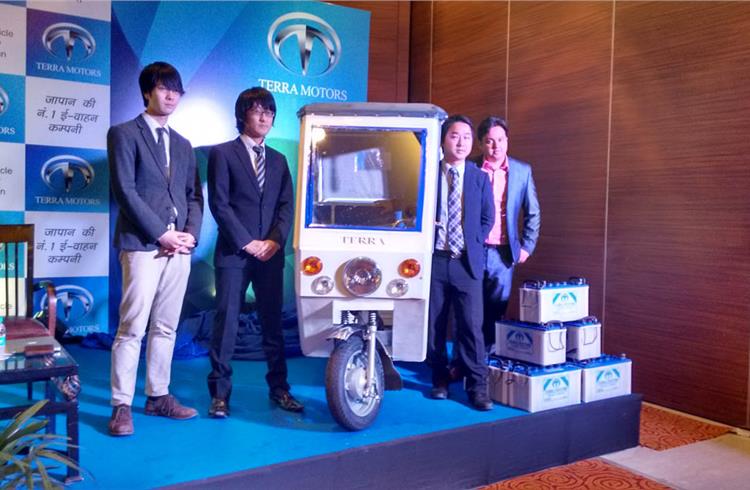 Priced at Rs 120,000 (ex-showroom Delhi), the e-rickshaw will be available at Terra dealerships  from the first week of April. It is powered by the indigenously produced Terra lead acid battery which will also be sold as a replacement through Terra outlets at Rs 27,000 and with a one-year warranty. The Y4Alfa weighs 320gg with the battery weight pegged at 112kg. The e-rickshaw is 2800mm long, 940mm wide and 1,795mm tall and comes with front telescopic and rear leaf suspension.

The Y4Alfa is the second product from the Terra Motors stable to be launched in India after the Y4 e-rickshaw that was introduced last September. The Y4Alfa, which the company claims has a range of 100km and a maximum speed of 25km, can be fully recharged in 7 hours. The vehicle, which has a high localisation level of 95 percent, has been designed and developed in India at Terra’s local facility and R&D centre in Gurgaon in Haryana.

Terra Motors’ lead acid battery manufacturing facility in Bangalore has a monthly production capacity of 20,000 units. The battery has a lifespan of 18 months that the company claims reduces operational costs by a third.

Expansion on the anvil
Speaking at the vehicle launch today in New Delhi, Teppei Seki, managing director of Terra Motors India, said that the company has thus far invested $2 million (Rs 12.63 crore) in establishing its operations in India. It plans to invest another $5 million (Rs  31.58 crore) in expanding capacity at its Gurgaon facility and locating a second production unit in the vicinity to further ramp up production as well as existing manpower. The Gurgaon plant has a production capacity of 2,000 units a month and has so far utilised 50 percent of the capacity. Plans are to ramp up further to 3,000 units per month by end-September and reach a capacity of 30,000 units for e-rickshaws and 20,000 units for batteries.

At present Terra has manpower strength of around 65 people across different streams with about 10 engineers in the R&D centre. It plans to scale up the headcount to 200 by end-2016 which is also around the time when it will further beef up its dealership network to 100 from the current 30 outlets that are mostly located in northern India.

Till now, Terra has sold 3,500 e-rickshaws in India and exported a few hundred units to Nigeria and Tanzania. It has also supplied 1,000 units to Nepal, with exports constituting about 4-5 percent of total production. In Bangladesh it sells e-rickshaws through a manufacturing setup inked through a local joint venture.

Likely to bring its two-wheelers to India
Seki told Autocar Professional that Terra Motors is also working on developing a cargo model with a 500-1,000kg payload capacity and it would take about 6 months to develop it indigenously. Terra, which has a 40 percent market share in Japan for its electric models, is also mulling bringing its electric two-wheelers to India next year as part of its expansion programme. It is also exploring development of higher-capacity batteries in India. Currently the batteries are tubular and are of 100Ah 48V capacity.

The company had showcased its A4000i electric scooter at Auto Expo 2014. The A4000i uses a rear in-wheel motor which is powered by Terra Motors’ own lithium ion battery pack (48V/40AH) which, according to company data, lasts for 50,000km (lifetime range). Terra Motors aims at selling this model primarily in South-Asian markets (including Japan).

The lithium ion battery-powered A4000i, which weighs 118kg, has a maximum range of 60 kilometres and a top speed of 60kph. Recharging takes around 5 hours.

The electric three-wheeler space in India is currently seeing a lot of action. Recently Kinetic Green Energy and Power Solutions, a Kinetic Group company, had rolled out its e-three wheeler called Kinetic Safar priced at Rs 1.38 lakh. And on February 10,  Clean Motion, a Swedish company, kicked off operations of its Zbee premium e-rickshaw to provide last-mile connectivity in Gurgaon through an agreement with DLF. Introduced as a CKD, the Zbee costs Rs 5 lakh but there are plans to cut its price by 50 percent within a year through a phased localisation programme.

The fledgling electric vehicle industry in India is expecting some big-ticket incentives in the Union Budget 2016 on February 29.