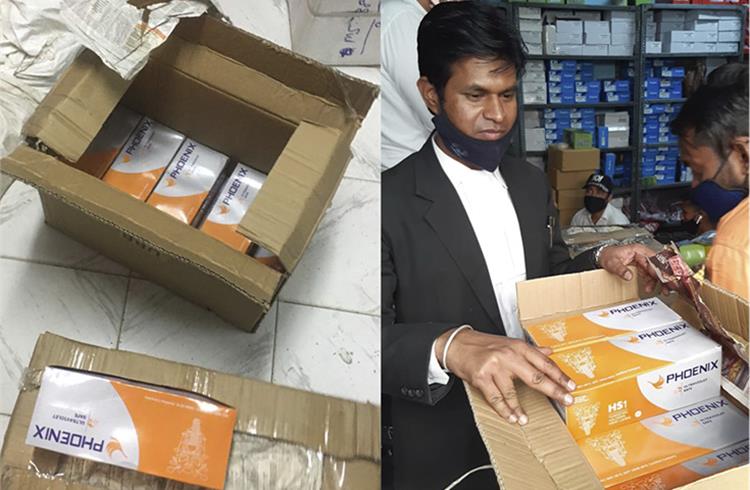 The raid was conducted on the orders of the District Judge, Tis Hazari Courts, Delhi. These counterfeit products would have been sold in adjoining states like Uttar Pradesh, Haryana, Punjab, and others across India.

During the raid, counterfeit Phoenix automotive halogen bulbs made in the name of Suprajit were recovered. The team also seized labels and company-branded fake packing materials, among other fake products. The raid team consisted of appointed commissioners by the court, police constables, and a vigilance specialised team from Suprajit Engineering. A case was registered against the accused under Section 64 of the Copyright Act.

Both Suprajit Engineering and Phoenix are registered trademarks and have unique identifiable parts with complete traceability.

A company spokesperson said: “We are grateful to the local police and other enforcement agencies involved in the raid. We will continue to run a nationwide campaign against counterfeiting, across prominent markets such as Punjab, Haryana, Uttar Pradesh, and others. This includes all necessary legal and punitive action against criminals, manufacturers, and traders responsible for making counterfeit products, besides raising awareness among its business partners and customers about counterfeit products.”

He added: “According to ACMA, an estimated 20 percent of road accidents occur due to forged auto parts, leading to several deaths. We have noticed Karol Bagh market feeds into UP, Haryana and Punjab and we wish to create awareness around this so that the customer is not impacted. Customer safety is our priority, and we are constantly striving to ensure best global quality practices while setting new benchmarks in the industry. We want to empower the consumer as well as ensure that the Government does not lose out on its revenue in the form of excise duties, VAT and other local taxes.”

The Suprajit Group is a global leader in the automotive cable and halogen bulb industry. With a competitive manufacturing base in India, UK, US and Mexico, along with technical and logistical supports worldwide, the group provides product development and manufacturing solutions. The Group comprises Suprajit Engineering (including Phoenix Lamps), Suprajit Automotive, Suprajit Europe and Wescon Controls.