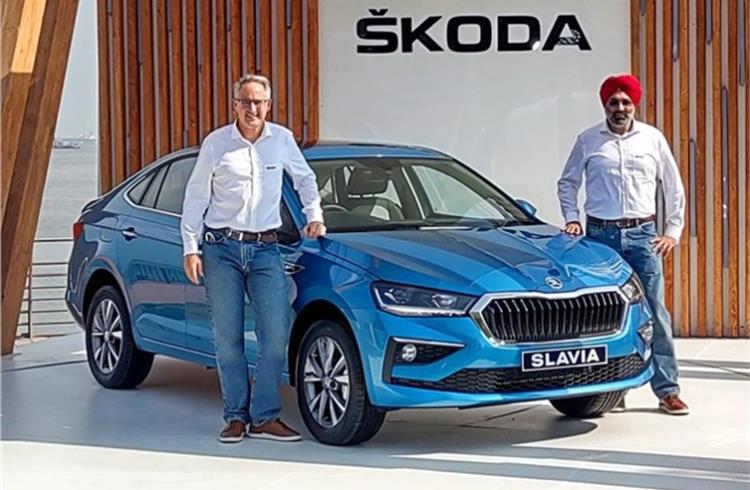 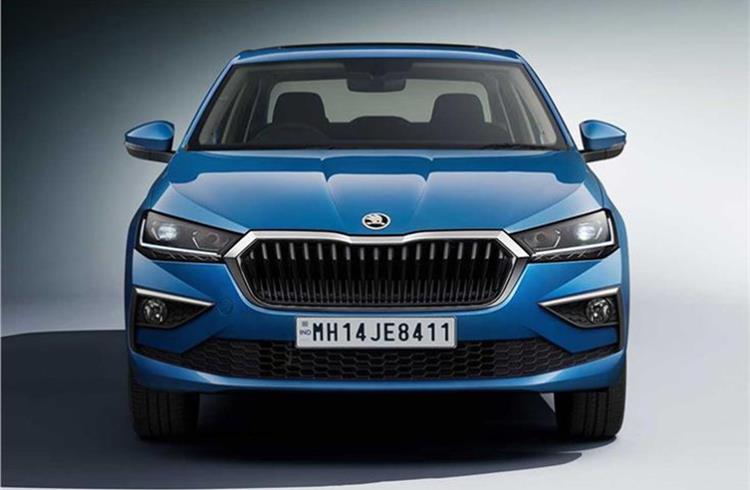 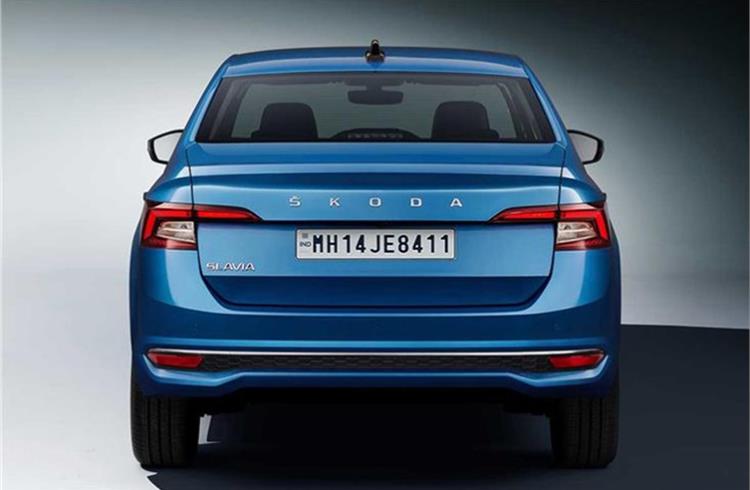 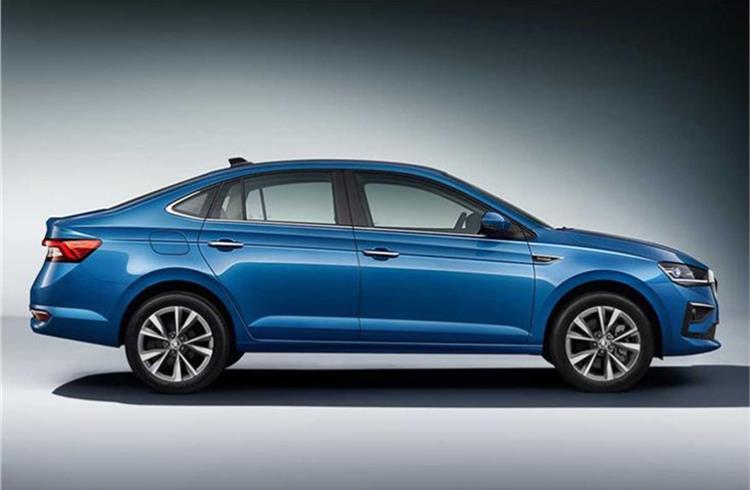 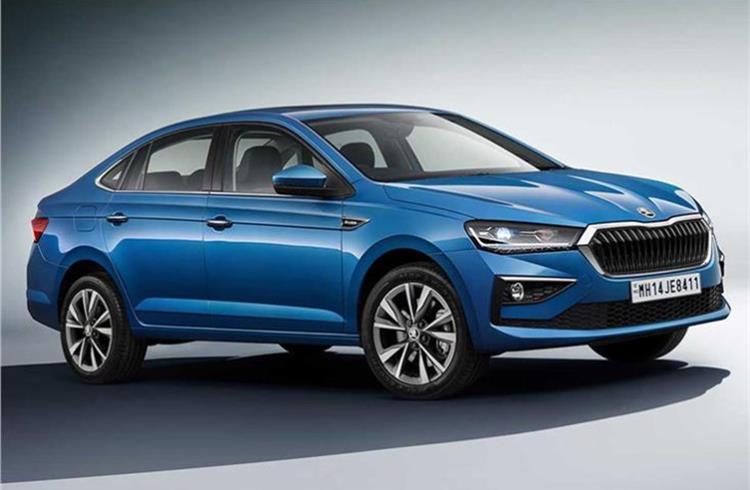 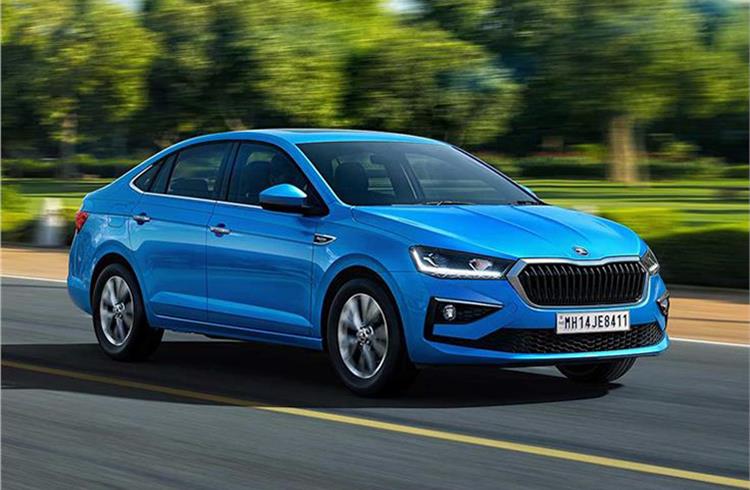 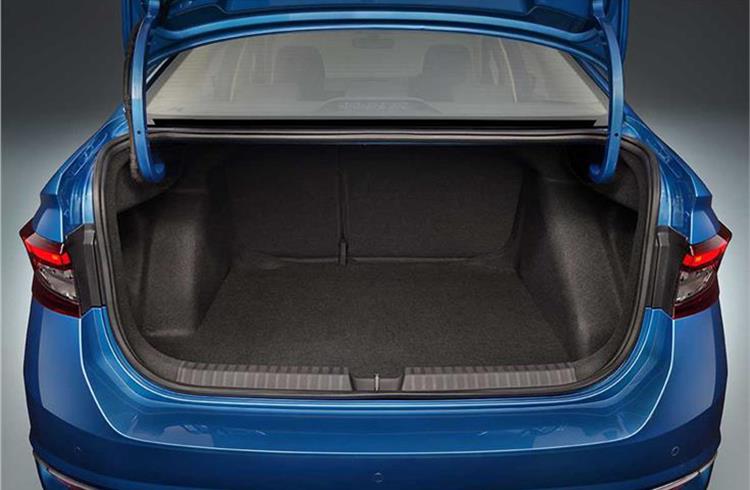 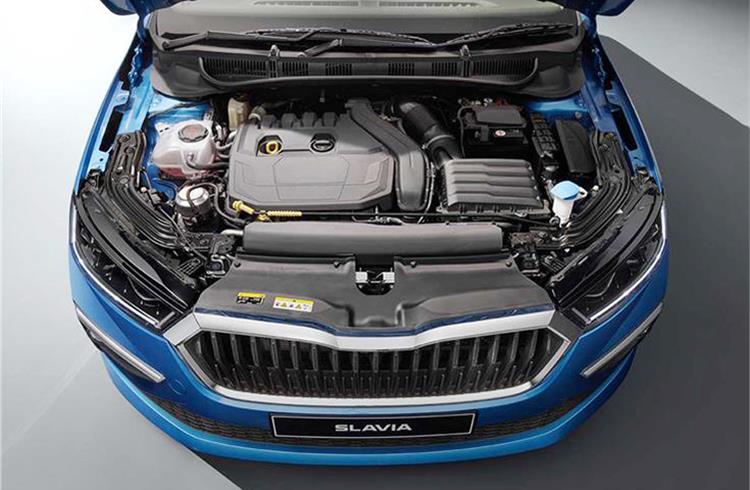 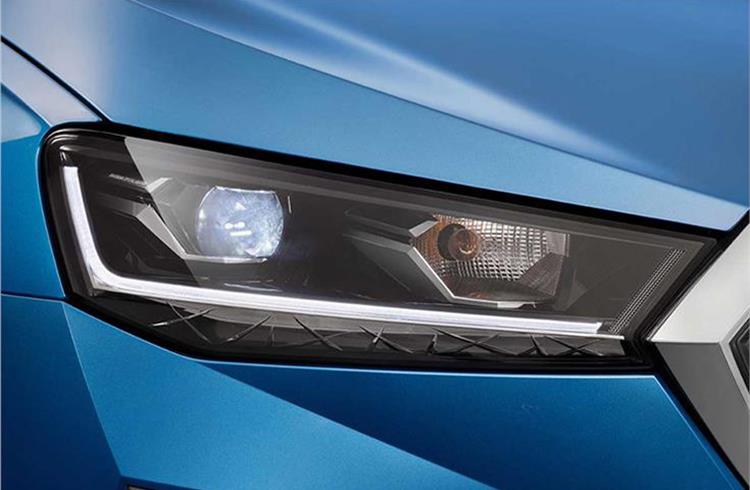 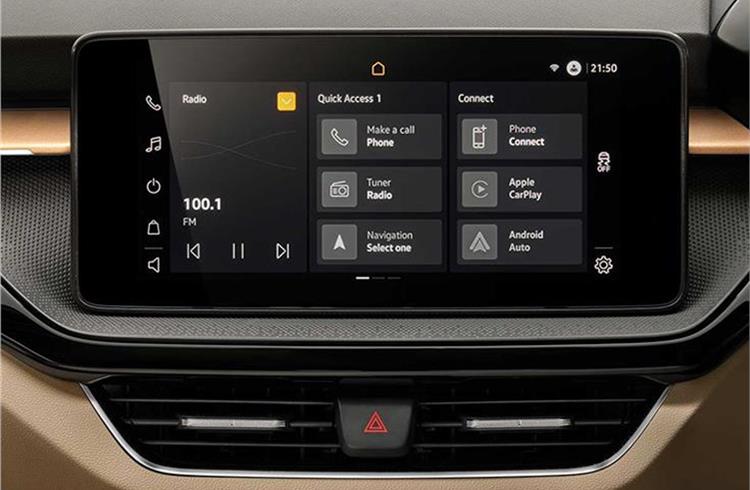 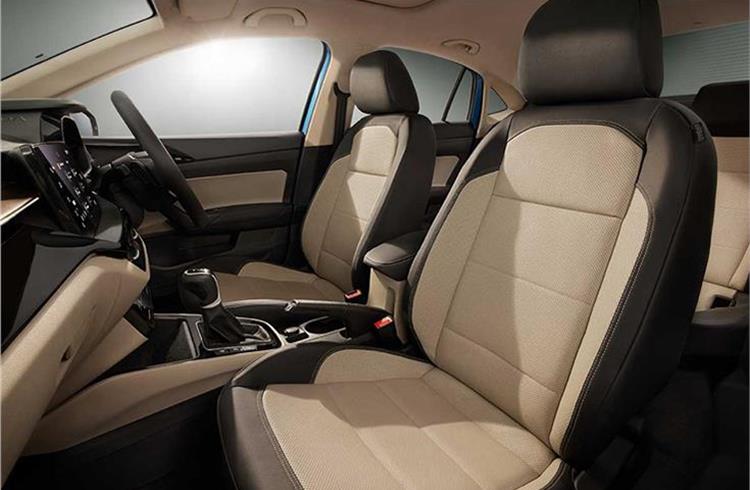 The new Skoda Slavia, Skoda’s replacement for the decade-old Rapid sedan, has finally been revealed in production guise. Slated to go on sale early next year, the new Slavia is based on the made-for-India MQB A0 IN platform, that also underpins the Kushaq and the Taigun, and is said to have a localisation level of up to 95 percent. Bookings for the Skoda Slavia have been opened today, with customer deliveries set to commence in the first quarter of 2022.

Dimensions and design
The Slavia is 4,541mm long, 1,752mm wide and 1,487mm tall, with a wheelbase of 2,651mm. Compared to the outgoing Rapid, the new Slavia is 128mm longer, 53mm wider, 21mm taller and the wheelbase is 99mm longer. In fact, not only does the Slavia have the longest wheelbase, but it is also the widest in its class. It also has a substantial 521-litre boot. 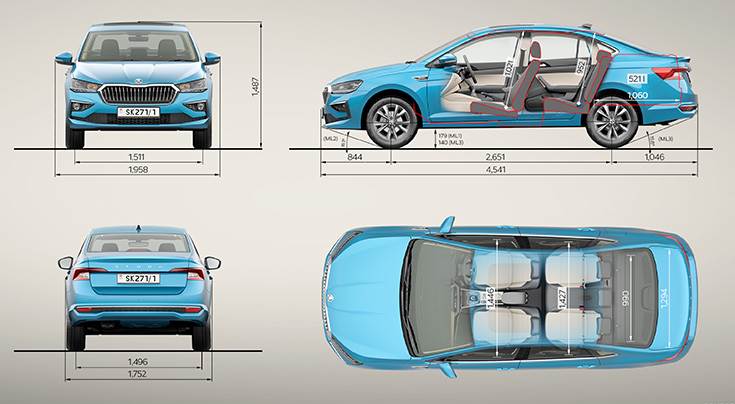 In typical Skoda fashion, the Slavia is a handsome and sporty looking car. It has a low and wide stance with sharp character lines and muscular contours. Up front, the face is characterised by Skoda’s signature butterfly grille that’s flanked by sleek headlights with L-shaped Daytime Running Lamp strips on either side. The front bumper looks sporty with plenty of cuts and creases and an inverted L-shaped motif for the fog lamp housing. 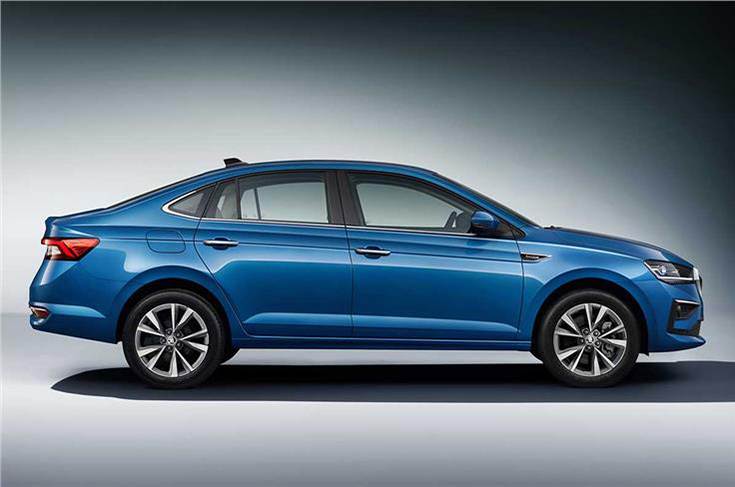 In profile, the Slavia has a coupe-esque silhouette owing to the gently sloping roofline that merges smoothly into the boot lid. There’s a strong character line that runs along the shoulder from the front fender to the tail-lights and the window line gets a chrome trim. At the rear, the sedan boasts of C-shaped LED tail-lamps that divide into two parts and extend into the boot. There’s ‘Skoda’ lettering on the boot lid and the bumper gets a full-width chrome strip, accentuating the car’s width. Overall, the design can be described as sophisticated yet sporty. Meanwhile, the top-spec Slavia will ride on 16-inch dual-tone alloy wheels.

Interior and features
The interior of the Skoda Slavia bears resemblance to the larger Octavia sedan in terms of design. Several interior trims and switchgear are shared with the Kushaq, like the two-spoke steering wheel with mounted controls and knurled buttons. There’s a 10-inch touchscreen infotainment system taking centre stage on the dashboard, which is underlined by sleek AC vents right below. There’s also a horizontal decorative trim on the dashboard in a contrasting colour, which lends it a nice layered effect. 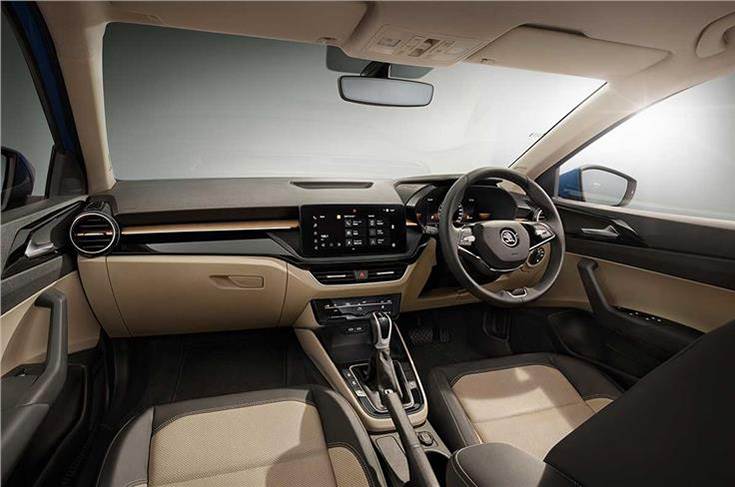 The climate control panel is a touch-based unit, as seen on the Kushaq. However, unlike the Kushaq, which gets hexagonal AC vents at either ends, the Slavia gets round air-con vents on the sides. The centre console has a clean, uncluttered look with a wireless charging pad just ahead of the gear lever. The Slavia also gets a digital instrument cluster and the word 'Skoda' embossed on the instrument binnacle.

The Slavia is considerably larger than the outgoing Rapid, which translates into improved interior space. The segment-leading wheelbase allows plenty of legroom for passengers to really stretch out, and with the additional width, the cabin feels roomier overall.

At launch the Skoda Slavia will be offered in three trims - Active, Ambition and Style. 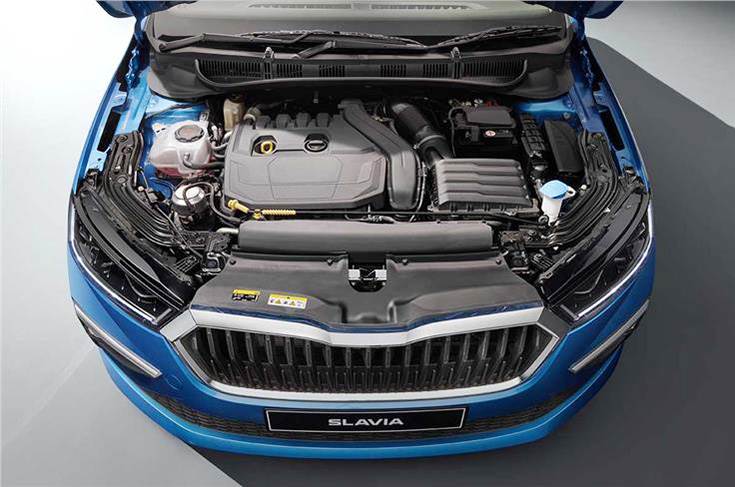 Engine and gearbox
The new Skoda Slavia is being offered with a choice of two TSI turbo-petrol engines. The first is a 115hp, 1.0-litre, three-cylinder TSI unit that is paired to either a 6-speed manual or a 6-speed torque converter automatic gearbox. The other, more powerful option, is a 150hp, 1.5-litre, four-cylinder TSI motor that gets either the 6-speed manual or a 7-speed DSG gearbox. The 1.5 TSI is also equipped with fuel-saving cylinder deactivation technology.

Thomas Schafer, CEO. Skoda Auto, said, “With the new Slavia, we are igniting the next stage of our India 2.0 product campaign. Following the successful launch of the Kushaq, we are now entering another popular segment with our brand-new premium midsize sedan. The Slavia is perfectly tailored to the needs of our customers in India and is built with up to 95% localisation. We are confident that both the Kushaq and the Slavia will allow us to leverage the full potential in this promising, growing market.”

Gurpratap Boparai, Managing Director of Skoda Auto Volkswagen India, said, “With its sophistication, capable engines and numerous Simply Clever features, the Slavia will appeal to discerning customers in India, and it will also be appreciated in markets around the world. We are confident that the Slavia will continue the benchmarks set by the Octavia and Superb and will help us to further strengthen our dominance in the segment.”

Zac Hollis, Brand Director, Skoda Auto India , said, “With the launch of Kushaq, we have witnessed unprecedented growth for Skoda Auto India. The Slavia gets us back to our roots, as the brand that brought the original premium sedan to India. Despite the headwinds faced by the industry, we have continued with our product campaigns, expanded our network reach to more than 100 cities, augmented the brand awareness, delivered on our promise of customer centricity, professionalised the dealer network, introduced value added services and benchmarks in the aftersales business. Slavia is gorgeous inside out and will be our second volume driver along with Kushaq, as we continue to substantially grow our volumes in India.”

India launch, expected price and rivals
The new Skoda Slavia is likely to be launched by February-March next year and is expected to be priced between Rs 10 lakh-16 lakh (ex-showroom). The Slavia will rival other midsize sedans like the Honda City, Hyundai Verna, Maruti Suzuki Ciaz and the upcoming Volkswagen Virtus.