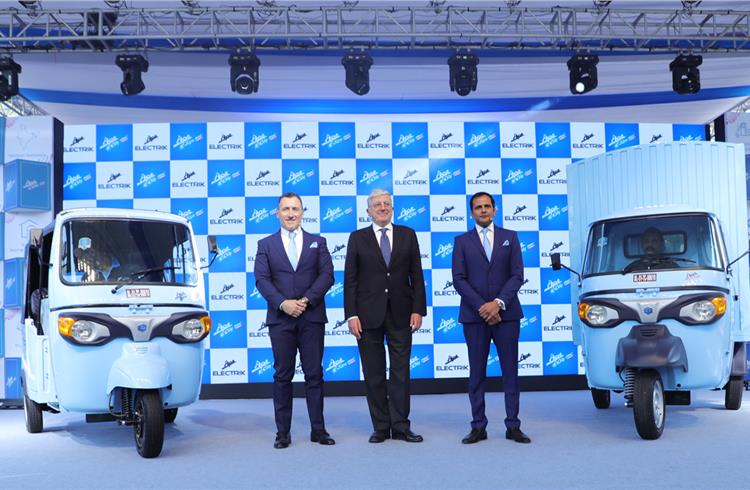 Piaggio Vehicles has launched its new range of all-electric FX Max three-wheelers. They comprise the Ape E-City FX Max in the passenger segment and Ape E-Xtra FX Max in the cargo segment. This model series rolls out of the company’s Baramati plant where assembly operations are conducted by an all-women team.

The new vehicles were unveiled by Vincenzo de Luca, Ambassador of Italy to India in the presence of Diego Graffi, Chairman and MD, Piaggio Vehicles and Sudhanshu Agrawal, EVP and Business Head, EV and Exports, Piaggio Vehicles in New Delhi on December 15.

Banking on low TCO to drive sales
Piaggio Vehicles is banking on the low TCO (total cost of ownership) mantra to drive sales of the new electric Ape FX Max range of three-wheelers. The Ape E-Xtra FX Max cargo model, which costs Rs 345,947 (ex-showroom), has a claimed range of 115km on a single charge. Its sibling, the Ape E-City FX Max cargo model has a sticker price of Rs 325,794 (ex-showroom Pune) and a claimed range of 145km per charge.

Piaggio claims the Apé FX Max range of commercial three-wheelers has a running cost of less than Rs 0.50 per kilometre, which when combined with the aggressive price point contributes to lower Total Cost of Ownership (TCO) overall.

The company states both vehicles have improved gradeability – 20% for the passenger carrier and 19% for the cargo variant. Warranty on offer is up to 175,000km for the passenger variant and up to 150,000km for cargo vehicles. Advanced telematics 2.0 enable better navigation and also allow fleet owners to track and manage their fleet with efficiency.

Diego Graffi, Chairman and MD, Piaggio Vehicles said, “Our talented team of engineers and R&D have designed the new Ape FX Max range to ensure optimum value for customers through better range, gradeability, and load-carrying capacity, as well as providing a competitive total cost of ownership. We feel the new range is an entrepreneur’s best bet to reap maximum benefits.”

Of these, over 10,000 will be deployed in partnership with Sun Mobility for both cargo and passenger operations in more than 14 cities in India. Piaggio India is also partnering with Three Wheels United with their aggressive retail finance scheme for both Passenger and Cargo vehicles.

Diego Graffi said, “The MoUs we have signed also cement our commitment to building India’s EV infrastructure with competent and reliable partners. We are sure of a successful collaboration that will not only significantly benefit customers but also pave the way for safer and more advanced EV technology in the country.”

With the expansion of its electric model range, expect the company to make new inroads into the market.