Nitin Gadkari: ‘I expect EV prices to match their petrol-diesel counterparts in the next two years.'

Union Minister for Road Transport and Highways believes the focus now is on electrification and clean air. 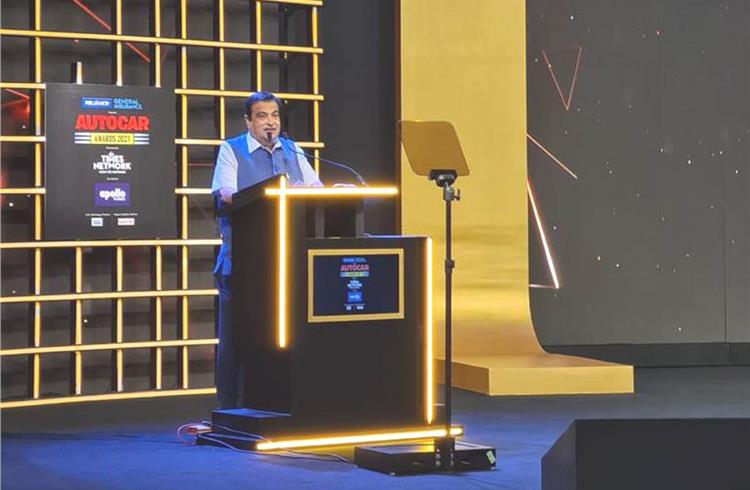 The 2021 Autocar Awards which weaved the entire Indian auto industry together on Tuesday evening in New Delhi, drew to a successful close with Mahindra’s Thar and Royal Enfield’s Meteor 350 bagging the ‘Car of the Year’ and ‘Bike of the Year’ trophies, respectively.

Union Minister for Road Transport and Highways (MoRTH) and MSMEs, Nitin Gadkari, who was the chief guest of the ceremony, praised the Indian automotive industry in his opening remarks, for taking the gigantic target of BS VI in its stride and accomplishing it in a record time (of less than three years). "We have made a success of the BS VI story. My thanks to all of industry for your  efforts and cooperation."

The transport minister remarked that the focus now is towards electrification and clean air. “We must understand that the country is struggling with the huge problem of importing up to Rs 800,000 crore (US$ 108 billion) of crude oil every year, which is pushing us back economically.”

“That aside, rising pollution is an even bigger concern with States such as New Delhi seen grappling with it,” he said.

Gadkari said that the EV roadmap is ready and at its level, the government is making a lot of reforms in terms of innovation in lithium-ion technology and its manufacturing by engaging with different institutions like ISRO, DRDO, and IITs.

“At present, we are making up to 81 percent of the entire composition of the lithium-ion battery locally in India, and I am confident that within two years, we will be able to take it to 100 percent,” Gadkari remarked.

The minister also stated that he personally anticipates the prices of electric two-wheelers and four-wheelers coming down to the level of their conventional petrol counterparts in the next two years, while electric buses will retail at prices equalling their diesel-powered brethren.

“I know there are some problems, but the way in which the industry is working makes meextremely confident about achieving this.”

“There is tremendous work going on in areas such as metal-ion and metal-air battery technologies, which are set to enable this target,” he added.

He also indicated that the government is constantly increasing the production of alternate fuels such as ethanol and urged the auto industry to extend its support by developing flex-fuel engines, especially for two-wheelers and passenger vehicles, like in the case of countries such as Canada, Brazil, and the US.

“My suggestion is that we must switch to import-substituting, cost-effective, pollution free and indigenous propulsion options,” the minister signed off.