New vehicles to be pre-fitted with high security registration plates from April 1, 2019

OEMs will have to supply high-security registration plates including the third registration mark along with the new vehicles to their dealers. 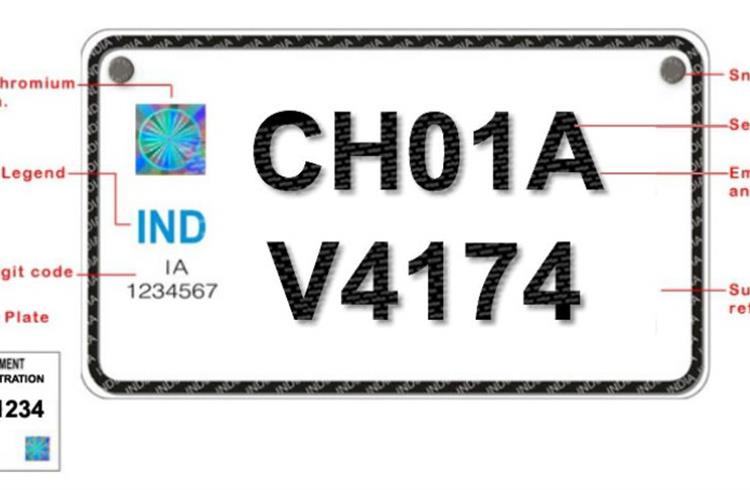 In a move to curb vehicle theft and facilitate easier tracking of lost or stolen vehicles, the Ministry of Road Transport & Highways (MoRTH) has amended the Central Motor Vehicles Rules, 1989, making all new vehicles sold from April 1, 2019 to be pre-fitted with High Security Registration Plates (HSRP).

According to the notification, HSRPs including the third registration mark will have to be supplied by vehicle manufacturers along with the vehicles manufactured on or after April 1, 2019 to their dealers. The dealers will mark the registration on such plates and affix them on the vehicle.

Existing vehicles can also opt for HSRP but only once the old numberplates have been surrendered and destroyed. The government says this step is likely to improve the coverage of HSRP on vehicles, while ensuring its quality by vehicle manufacturers. HSRP helps in keeping track of a vehicle, and makes it easier to trace a lost or stolen vehicle.

The new registration plates will come with a 15-year guarantee. If the HSRP breaks, withers or suffers any other natural damage within that time period, it will have to be replaced by the dealer who fitted it.

To discourage counterfeiting, a chromium-based hologram will be hot-stamped on the top-left corner of both front and rear HSRPs. This stamp will contain the Ashoka Chakra in blue. The 10-digit permanent identification number (PIN) will be laser-branded into the bottom-left corner of the HSRPs, and the hot-stamping film to be applied on the letters and numerals of the registration number will have 'India' inscribed on it.

Additionally, there will be a third registration plate in the form of a self-destructing chromium hologram sticker, which will have to be affixed on the bottom-left side of the windshield, on the inside. Details such as the registration number, the registering authority, laser-branded PIN and the engine and chassis number will be part of this sticker.

To ensure the HSRPs aren't stolen, the circular states that the rear HSRP will have to be fastened with "at least two" non-removable/non-reusable snap locks.