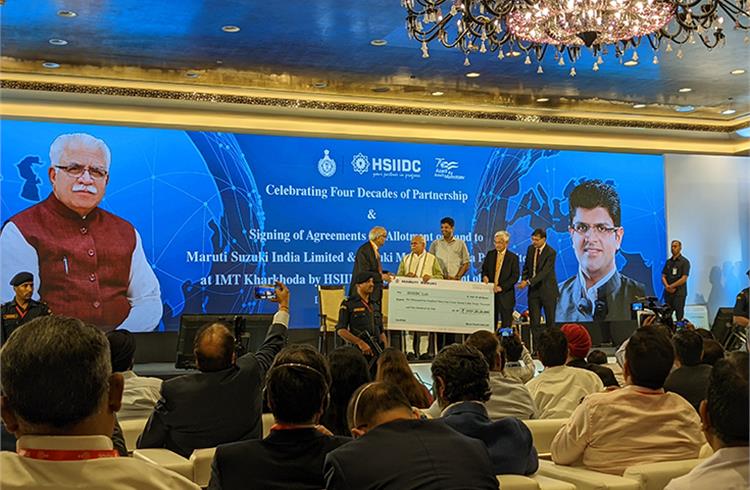 The carmaker will invest Rs 11,000 crore in the first phase to set up an installed capacity of 250,000 units, and hopes to further expand capacity and achieve full capacity utilisation of 1 million units in the next eight years.

The amount of Rs 2,131 crore was paid by Maruti to HSIIDC with Suzuki Motorcycle contributing Rs 266 crore. This takes the total Suzuki investment in land to Rs 2,366 crore . The Haryana chief minister said that this is one of the largest single-deal transactions for the Haryana government.

“Maruti Suzuki India was getting skeptical about investing in Haryana for its third plant, but we were able to get them to invest as the property near the upcoming IMT Kharkhoda offers tremendous connectivity with the rail, road and air links, and access to a hardworking workforce,” said ML Khattar, Chief Minister of Haryana.

Maruti Suzuki clarified that the investment in the two-wheeler plant will be separate and an announcement will be made in due course.

Kenichi Ayukawa, Executive VC added that, “The growth of Maruti and Haryana are interlinked. We hope that India will  become the third-largest carmaker in the world in the coming years, and Haryana is playing a big role. It's a great location for the manufacturing of cars for domestic and export markets.”

The first plant with 250,000 unit capacity is likely to be commissioned within 2025. Elaborating further Chairman, RC Bhargava explained that Kharkhoda will become the largest auto hub in India, and will set an example that government and industry need to work with mutual trust, and that's the way forward, “The potential for future growth of India is huge both for domestic and export products. Subject to market conditions, Maruti will achieve full capacity utilisation of 1 million units in about 8 years.”

Bhargava added that Maruti Suzuki India will focus on manufacturing conventional ICE cars at the new plant and the carmaker's EVs, first of which, will roll out in 2025, will be produced at Suzuki's wholly-owned plant in Gujarat. "There's no need to duplicate EV production that is for now earmarked at Gujarat. If and when there is the need for making EVs in Kharkhoda, we will take that decision," Bhargava added.