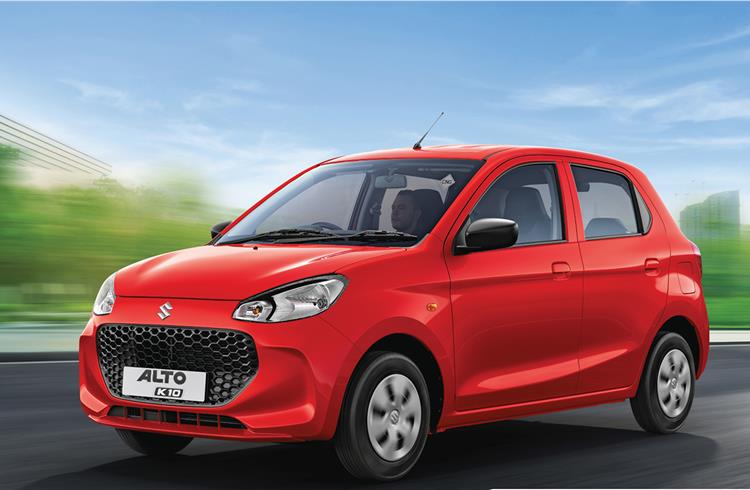 With demand returning to the budget entry-level hatchback market, albeit in a tepid manner, passenger vehicle market leader Maruti Suzuki is widening the reach of its Alto with the launch of a CNG variant.

Launched in August 2022, the third-generation Alto K10 gets the S-CNG factory fitted kit and is priced at Rs 595,000 (ex-showroom Delhi). Sold only in the VXi trim, the Alto K10 CNG variant costs Rs 95,000 more than its petrol-engined Alto K10 sibling.

Maruti Suzuki India, which is looking to maximise sales of its CNG-powered cars, gets a 13th model in the form of the Alto K10 which joins the Alto, S-Presso, Wagon R, Eeco, Celerio, Swift, Dzire, Ertiga, Baleno, XL6, Super Carry and Tour S.

Like the S-Presso CNG launched in October 2022 and the Celerio CNG introduced in January 2022, the Alto K10 CNG is also powered by the 1.0-litre K10C engine mated to a 5-speed manual gearbox. In petrol-only mode, the new engine develops 65hp and 89Nm of torque; in CNG mode, the comparative figures are 57hp and 82Nm respectively.

Maruti Suzuki claims the new Alto K10 CNG delivers fuel economy of 33.85km/kg, which is 1.12km/kg higher than the S-Presso CNG, but 1.75km/kg lower than the Celerio CNG – currently India’s most fuel-efficient CNG model. The company states that it has recalibrated the Alto K10’s suspension setup to improve its overall ride quality, comfort and safety.

Commenting on the company’s latest CNG model, Shashank Srivastava, Senior Executive Officer, Marketing & Sales, Maruti Suzuki India, said: “The Alto continued to be the best-selling vehicle in the country for 16 consecutive years, and we are convinced that the launch of the S-CNG model will further strengthen its appeal, thanks to its stellar fuel-efficiency. Our S-CNG range is specially designed, developed, and manufactured at our facilities to suit Indian driving conditions.”

Maruti Suzuki has been the pioneering OEM in the factory-fitted CNG segment in India and its S-CNG technology offers dual inter-dependent ECUs, an intelligent CNG injection system, stainless steel pipes and joints to avoid corrosion and leakage in the entire CNG circuit.

CNG capacity ramped up to 35,000 units a month
Given the Rs 16.79 price differential of petrol (Rs 106.29 a litre) versus CNG, despite the November 5 hike which increased CNG price in Mumbai to Rs 89.50 per kg – the eighth in this year and up 81% in 21 months – Maruti Suzuki is seeing sustained demand for its CNG models. What’s more, the company has recently extended the CNG option to its two premium Nexa models – the Baleno and XL6.

This has meant the company has had to increase manufacturing capacity. From end-July 2022, when it had a monthly CNG installation capacity of 26,000 units at its Gurugram plant, it has ramped up capacity to around 35,000 units a month. According to Shashank Srivastava, Maruti Suzuki is registering an average of 1,320 daily new bookings for CNG cars in its portfolio. Thius will further increase with the introduction of the Baleno and XL6 CNG, and now the more affordable model, the Alto K10 CNG.

Of its total order backlog of 450,000 units at end-September 2022, MSIL had 125,000 pending orders for its CNG-equipped car variants. While the Wagon R remains the top-seller with up to 40 percent of its sales coming from CNG variants, the company is seeing also seeing demand for the recently-introduced Swift CNG. The just-launched Alto K10 CNG will add to the volumes.