The XL6 is a more premium version of the Ertiga, an updated version of which the company recently launched. 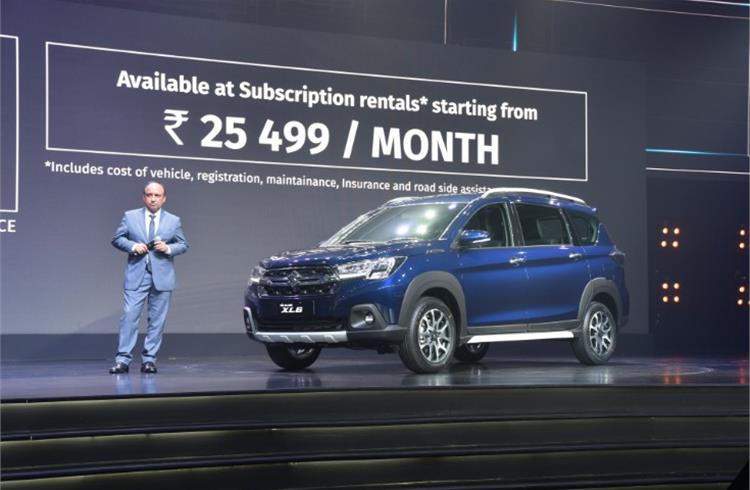 Having touched close to 61 percent market share in the multi-purpose vehicles (MPV)s during last fiscal, Maruti is aiming to further strengthen its position even as the demand in the segment continues to surge.

Speaking to Autocar Professional on the sidelines of the Mumbai launch of the updated XL6, Shashank Srivastava, senior ED, Marketing and Sales, Maruti Suzuki said the MPV category recorded 260,000 unit sales during last year, out of which Maruti’s contribution roughly stood at around 160,000 units. The XL6 is the more premium version of the Ertiga, an updated version of which Maruti recently launched.

As Srivastava put it, “This category is growing in absolute volume and our market share is very strong," said Srivastava, noting that a lot of interest is being shown by all manufacturers in this segment.

Maruti’s foray into the MPV segment took place a decade ago in 2012 with the launch of the first-generation Ertiga. For the first few years, the sales numbers hovered around 5500 units monthly or 65000-70000 units on an annual basis. The overall segment was confined to just about 4-5 percent of total car sales with large families primarily forming a major chunk of its customers.

However, launched in November 2018, it was the second-generation Ertiga which turned the tables around for Maruti's MPV sales. The new Ertiga wooed customers with its distinctively premium design, better build quality, more space, and enhanced comfort to attract even family buyers and fleet owners alike. The demand uptick for Maruti's MPVs, including the Ertiga and its premium six-seater version - XL6 - led volumes surge to 190,000 units annually.

With the Ertiga, Maruti on its part was able to grab a 35-36 percent market share as the Ertiga started clocking monthly sales of around 10,000 units with another 3,500-odd units coming from the XL6 which was launched in around late 2019.

Even as the company grapples with the impact of the semiconductor shortage, overall demand continues to pick up for cars with order backlogs touching a record high of 325,000 units. This has ended up taking the average waiting period for the company’s vehicles to about two-and-a-half to three months, Srivastava said, adding that production has improved in the past few months. Planned production has jumped from 40 percent in September last year to 85 percent in November. It touched 95 percent in February and went a bit higher in March. The company has also focused on export models where the semiconductors required are more easily available. Maruti was also the top PV exporter in FY22 shipping 235,670 vehicles to over 100 global markets.

On the company's performance in the SUV segment, Srivastava highlighted that Maruti Suzuki's overall market share had been around 44-47 percent in the past two decades, except for four years prior to last year when it crossed the 50 percent mark. "We have coped very well" he emphasised before adding that non-SUV market share currently stands at its highest at 67 percent as against 58 percent around 4-5 years ago. On the other hand, the company’s SUV market share stands around 11-12 percent, he said.

Maruti's full-year domestic sales in FY22 closed at 13,31,558 units, but it could only manage a three percent year-on-year uptick as against 12,93,840 units sold in FY2021. Despite trebling demand, the company had to cope with a global chip shortage, which affected and reduced its production. While the situation eventually eased out later, and production returned to 90 percent normalcy in early 2022, unpredictability looms large again due to the ongoing Russia-Ukraine conflict, and as Srivasatva said in an official statement earlier, “there could be some impact on production volumes in FY2023 as well”.