Carmaker deploys the same DDiS 225 powerplant as in the Ciaz sedan in its MPV. 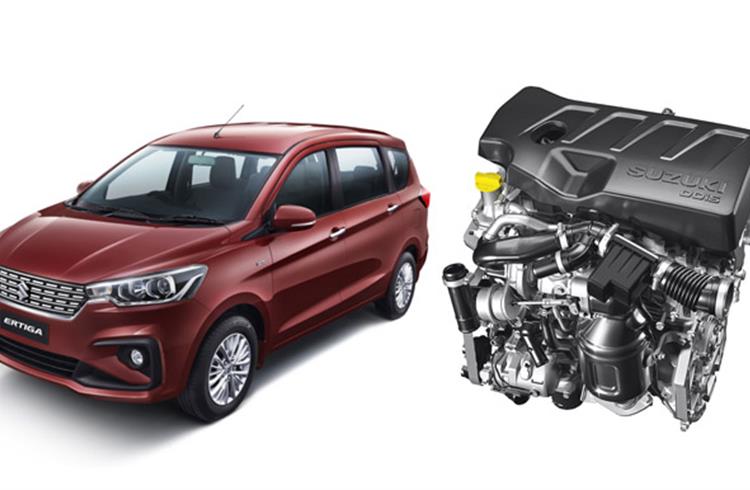 Exactly a month after introducing its new 95hp, 1.5-litre diesel engine (DDiS 225) on its premium Ciaz sedan, Maruti Suzuki India today launched the Ertiga MPV with the same powerplant. While  the base VDi model will cost Rs 986,000, the ZDi will cost Rs 10.69 lakh and the ZDI+ Rs 11.20 lakh.

The in-house-developed four-cylinder diesel motor develops the same 95hp at 4,000rpm and 225Nm of torque at 1,500-2,500rpm. It is identical, in every aspect, to the engine that sits under the hood of the Ciaz – from the dual mass flywheel to the new 6-speed manual gearbox. However, due to the Ertiga's relatively higher kerb weight, the ARAI-rated mileage per litre figure is now 24.20kpl, compared to the 26.82kpl on the Ciaz.

Compared to the Maruti Ertiga 1.3-litre diesel, the Ertiga 1.5 should be quicker and more driveable (thanks to the extra 5hp and 25Nm of torque) but is less fuel efficient by a 1.27kpl margin.

Besides the new engine-gearbox combination, the Ertiga is otherwise unchanged in terms of features or design.

Ertiga sales cross the 450,000 mark in 7 years
Maruti Suzuki claims that the Ertiga is the leader in its segment, having captured 39 percent of the segment’s market share. The brand also claims that the second-gen Ertiga, which had launched in India in November 2018, has sold more than 40,000 units until April 2019, reflecting a year-on-year growth of over 150 percent.

From launch in March 2012 till end-March 2019, the Ertiga has sold a total of 454,927 units, comprising 150,483 petrol variants and 304,444 diesel variants.  This means the Ertiga diesel accounts for an overwhelming 67 percent of sales with the remaining 33 percent being the petrol variants.

As we reported last week, Maruti will phase out all diesel cars before the April 2020 deadline to upgrade to BS VI emission norms, though an interview with chairman R C Bhargava confirmed that the 1.5-litre DDiS 225 diesel engine may make a comeback in BS-VI form depending on customer acceptability.