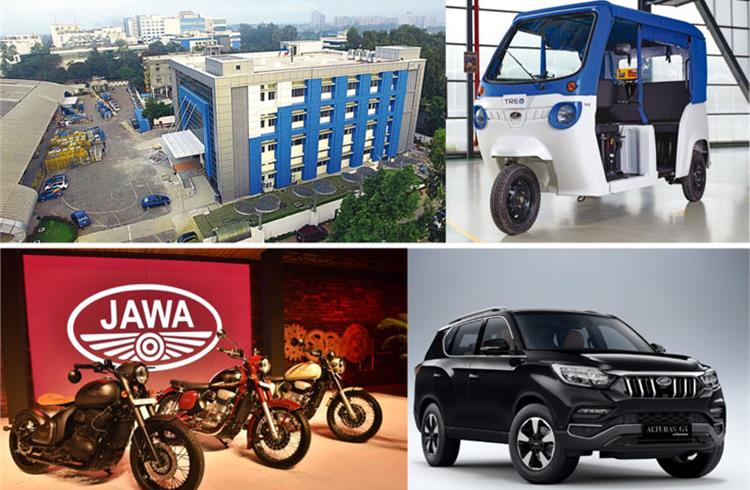 Mahindra & Mahindra today reported its financial results for Q4 and FY2019 for the consolidated Mahindra Group. The company reported consolidated revenues of Rs 105,806 crore, up 13 percent YoY, while profit after tax (PAT) is Rs 5,315 crore, down 29 percent for FY2019.

M&M says the muted demand in rural India on account of poor distribution of the Southwest monsoon, a deficit North-Eastern monsoon and weak agricultural incomes due to poor price realisation, stress in the NBFC sector led to tight credit conditions along with low demand in urban India and the overall sluggishness in the economy further led to a fall in both the tractor and automotive industry during last quarter of FY2019.

According to the company, while the domestic tractor industry witnessed a fall of 8.4 percent in Q4 FY2019, the company sold 56,903 tractors and exported 3,341 tractors, a decline of 14.9 percent and 10.9 percent respectively over the corresponding quarter of FY2018. On the other hand, after seven successive quarters of growth, the domestic automotive industry witnessed a reversal in Q4 mainly due to the negative growth of 2 percent and 5.9 percent in the Passenger Vehicle (PV) and M&HCV goods industry respectively.

Mahindra says despite the above-mentioned headwinds impacting the PV industry, the company successfully weathered these challenges and sold 77,607 vehicles in Q4 F2019, recording growth of 7 percent. The company says the launch of the XUV300 contributed to UV sales growth of 6.8 percent in Q4 F2019 with a market share of 27.9 percent. In April 2019, the XUV300 became the second-highest selling sub-4 metre SUV.

Mahindra says it now has three strong new products which will see full year impact on volumes in FY2020. The company also exported 10,200 vehicles during the current quarter, registering a growth of 17.1 percent over the corresponding quarter previous year.

In terms of overall sales, the company crossed the 600,000 units mark with its best ever sales at 607,548 units, a YoY growth of 10.8 percent. Globally, the company saw record sales of 755,978 units. In addition, its three facilities – Chakan, Zaheerabad and Haridwar – have joined the Kandivali and Nashik units for achieving the million-plus production milestone.

FY2020 outlook
​FY2020 looks to be a challenging year for India Auto Inc. Having already seen a tough Q4 FY2019, which impacted overall numbers, and BS VI norms barely 10 months away, both automakers and suppliers neck-deep in strategising growth plans.

Speaking at the results meet in Mumbai, Dr Pawan Goenka, managing director, M&M, detailed five factors that that will impact the industry in FY2020.

In FY2020, Mahindra & Mahindra aims to focus on regaining lost market share in the UV segment, further strengthen its CV share with the new Furio brand, make the new Treo three-wheeler available across its CV dealerships, and focus on building its digital business enterprise. All this while ensuring readiness and a smooth transition towards BS VI and manage operating margins through cost efficiencies.

An indication of the impact of BS VI on Mahindra diesels is that the company has confirmed plans to phase out the three-cylinder 1.2-litre turbo-diesel (in the KUV100 SUV). Dr Pawan Goenka feels that sub-1.2-litre diesels “will be too expensive” to meet BS VI norms. He also predicts that small capacity diesels are expected to disappear from the Indian market by 2020.

Furthermore, with Mahindra and Ford which announced their intent to form a strategic alliance two years ago, the partners have yet to come out with a jointly-developed product. Meanwhile, while the partners are working on a number of areas including developing SUVs, EVs and connected car solutions. Today, Mahindra said that in addition to its earlier understanding with Ford, the alliance could benefit with sharing of product development costs, technologies and manufacturing capacities to achieve economies of scale and positive impact on cash flows, margins and profits.

Dr Goenka, further said that the apex automotive body, the Society of Indian Automobile Manufacturers (SIAM) has asked the government to reduce GST on cars from 18 to 20 percent. Sharing his expectation's from the new government Dr Goenka said he asked the GST on vehicle sales need to be reduced, avoid too many regulatory changes as they have led to unnecessary extra costs to OEMs and suppliers. He said the recent changes to the axle load norm for CVs have caused significant loss to commercial vehicle industry.

In terms of new vehicle sales, Dr Goenka says this year "is all about how much pre-buying will happen by November and accordingly it will help for planning for BS IV inventory by March 2020."

On the sales slowdown in the Farm Equipment Sector,  it said the industry saw slowdown mostly because of drops in sales in the western region. On the other hand, Mahindra will make its highest ever investment for new product development in tractors in next three years.

On the new PV launch front, Dr Goenka said that Mahindra plans three new SUVs to further improve its market share. And on the investment front, the company will incur Rs 4,000-5,000 crore at its Chakan facility for Phase II.