Both companies are working together to launch a 4W product that will be quickly charged by Log9 batteries. 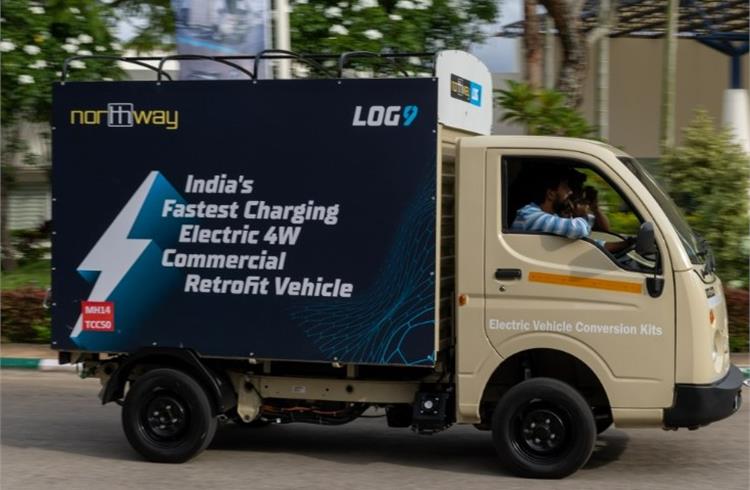 Bengaluru-headquartered startup Log9 Materials on Monday announced that it has entered into a long-term strategic partnership with Pune-based EV company Northway Motorsport to utilise the latter’s expertise to retrofit multiple used as well as new ICE-based Small Commercial Vehicles (SCV) into EVs alongside the integration of Log9’s RapidX batteries to deliver unmatched performance.

As a part of this collaboration, Log9 and Northway Motorsport will enable the retrofitment (ICE vehicle to EV conversion) service on a request basis for existing vehicles. Northway Motorsport will also tie up with various retrofitment workshops starting with metro cities like Bengaluru, Delhi, Hyderabad, and Mumbai, and then other parts of the country, as and when deemed necessary.

Furthermore, Log9 and Northway Motorsport are currently working hand-in-hand to introduce soon to the market a new 4W product that will leverage Log9’s technology. The jointly-developed upcoming e-4W SCV platform by Log9 and Northway will be capable of being fully charged within 45 minutes and will come with  an 8 years or unlimited kms.According to the company, it will be the country’s first 4W commercial EV consisting a 4-speed manual gearbox. Due to the integration of Log9’s InstaCharge technology, the vehicle shall be able to deliver peak performance in extreme temperatures ranging between -45 degrees to +60 degrees Celsius, the company said in a statement.

Given that commercial vehicles are a major source of pollution, and an imperative for goods transfer whether, for e-commerce, manufacturing, or logistics, Log9 and Northway jointly aim to address this concern by promoting the electrification of the commercial fleets. The collaboration also brings Northway Motorsport under the aegis of Responsible Delivery Movement – an initiative by Log9 aimed to accelerate e-mobility adoption for last-mile deliveries and bring down transportation and logistics-related emissions intensity in India by up to 33 percent by 2030, both the companies added.

Kartik Hajela, Co-Founder & COO, Log9 Materials said, “As of today, there are very limited options for a 4-wheeler commercial EVs in the Indian market, and additionally, existing 4W commercial EVs are suffering due to charging downtime and low battery life. While solving these issues, we at Log9 want in parallel hope to speed up the process of getting more and more CVs on the road in order to build use-cases around the success of converting the popular ICE commercial vehicles to electric-powered ones while using the InstaCharge technology of Log9.”

Hemank Dhabade, Founder of Northway Motorsports said, “Our partnership with Log9 is along the same lines, wherein we will be not just producing new retrofitted commercial vehicles and converting old ones to electric with fast-charging capabilities, but also launching a first-of-its-kind e-4W retrofitted SCV that would result in up to 70% monthly operational savings while retaining unchanged payload capacity.”

Notably, Log9 has leveraged its cell-to-pack competency to develop its InstaCharge battery-tech that provides what it claims to be 9x faster charging, 9x better performance, and 9x battery life. Log9’s InstaCharge technology brings down the charging time which further optimises the utilization of charging infrastructure and operational profitability for commercial vehicles, the company said. This is expected to lead to less waiting times (or downtime), higher uptime and increased vehicle utilization on roads. On the other hand, Northway Motorsport is the electric vehicle division of Hemank Auto Parts which has developed its in-house drivetrain solutions for EVs.