Kwid and Baleno start off on the right foot

Dubbed as game-changers in their respective segments, both the Kwid and the Baleno have managed to invoke strong interest from buyers. 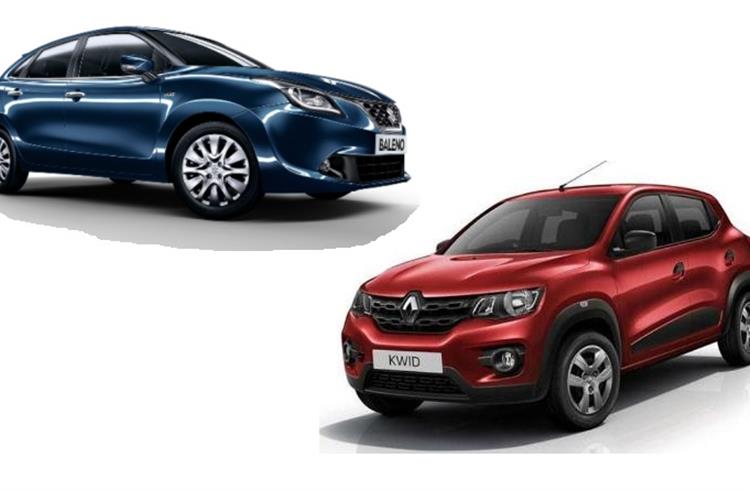 In terms of car sales in the country, October proved to be the best month in 2015 as low interest rates, fuel prices and a host of discounts for the festive season spurred demand.

But as the top carmakers saw a double-digit growth in sales, it was fresh launches which drew the most interest and captured the fancy of Indian buyers.

Among the recent launches were two of the most-awaited cars in the Indian market; the Renault Kwid and the Maruti Suzuki Baleno.

All the hype around these launches did not seem to disappoint too. Dubbed as game-changers in their respective segments, both the Kwid and the Baleno have managed to invoke strong interest from buyers. Renault has managed to sell 5,195 Kwids in October, while Maruti dispatched 4,229 Baleno cars, since its launch late in the month.

Renault surprised everyone with the attractive price of Rs 256,968 for the base model of the Kwid. Even Maruti, learning from its previous mistake of the steep pricing for S-Cross, priced the base VVT petrol Sigma model of the Baleno at Rs 499,000.

The Kwid is the new kid in the block in the hotly contested small car segment, dominated by Maruti and first model built on Renault-Nissan's CMF-A global platform. It is also Renault's first step towards tapping the entry-level segment in global markets and needless to say that the success or failure of the Kwid in India would set course for the Alliance’s strategy globally.

Meanwhile, the Baleno is the second model to be marketed from Maruti’s premium Nexa showrooms, and looks to go head to head with Hyundai’s Elite i20 and the Honda Jazz.

After the lacklustre performance of the S-Cross, largely due to the steep pricing, Maruti is not taking any chances and has priced the Baleno keeping in mind the sensitivities of the average Indian buyer. Success of the Baleno is not only important for Maruti as a product, but also for the Nexa showroom concept itself.

Given the overwhelming response, Renault India is substantially increasing its sales and service network reach in India. This network currently stands at 180 sales and service facilities, and will reach 280 next year. The company is also ramping up production will help reduce the long waiting period.

While it is still early days for both cars and the initial numbers do not tell the complete story, for the start that they have got, both look to be on the right track. It remains to be seen now whether the Kwid manages to eat into the sprawling share of the Alto and similarly if the Baleno could overthrow the Elite i20 as the segment leader in the coming days.