The recent move by Daihatsu and Suzuki to throw in their lot with the Toyota-led consortium of Isuzu and Hino shows that Japan’s automakers are revving up their consolidation efforts. 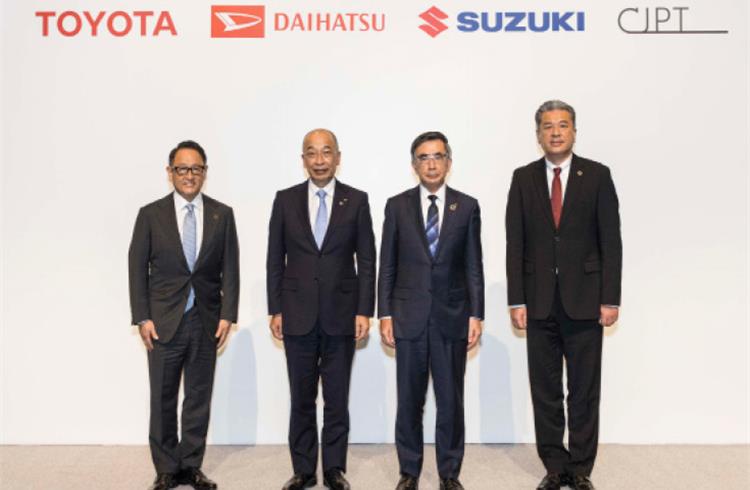 When Suzuki and Daihatsu decided to participate in a consortium involving Toyota, Isuzu and Hino last month, it marked yet another significant step by Japan’s automakers to deepen their bonding.

Toyota is the lead participant in the latest drive with a 60 percent stake where the initial focus was to hone efforts on new trends like electrification and autonomous driving. What began with commercial vehicle makers like Isuzu and Hino Motors has now spread to rope in Suzuki and Daihatsu too which means the scope will only increase from now.

Both Daihatsu and Hino are part of the Toyota fold and even while this exercise is only intended for Japan as of now, it would perhaps be naive to assume that the story will end there. Toyota and Suzuki have already entered into a cross-holding pact which will throw up a host of opportunities on joint product/platform development, new markets and electrification.

The focus will be largely on India as well as Africa, Latin America and even Europe/Japan if the synergies yield the desired benefits on costs and scale. India will logically emerge the hub for the next leap in R&D where the joint efforts of Toyota and Suzuki could spawn some interesting surprises during the course of this decade.

Daihatsu, likewise, will lead the play in ASEAN for Toyota though there is no telling if Suzuki will also have a role here. After all, when it comes to expertise in small cars, it makes sense to use the skills of the best player. Whether Daihatsu will make an entry to India is not entirely impossible either.

Toyota and Mazda have already entered into an alliance for North America and whether the latter will also throw its ring into the Japan consortium is a million-dollar question. As an industry observer says, “Toyota is the pivot of this consolidation happening in Japan and it makes perfect sense given its global standing and obvious strengths in technology.”

This could also be Japan’s way of reacting to the rapid pace of change across the world where automakers are quickly sewing up mergers and alliances to stay afloat.
The latest is Stellantis which was formed by the coming together of Groupe PSA and FCA.

Hino Motors incidentally has a tie-up with Traton, the CV business of the Volkswagen Group, where efforts on electrification will be focused on the ASEAN region. Isuzu recently bought out UD Trucks from Volvo and is now entering a new growth phase in ASEAN too.

The global automobile industry is also only too aware of the formidable stature of China where its own companies are snapping up big brands. The likes of Geely, Great Wall Motors and SAIC Motor Corp are keen on spreading their wings overseas which explains why they have brands like Volvo and Daimler in their kitty. However, China’s growing aggression is also causing anxiety especially in the aftermath of the pandemic and automakers will want to protect their turf more zealously.

Japan’s two-wheeler makers are also coming together to pool their competencies as in the case of the battery swapping consortium of Honda, Yamaha, Suzuki and Kawasaki. More recently, another consortium including Honda, Yamaha, KTM and Piaggio was formed for a similar objective.

Prior to this was the move by Honda and Yamaha to bury the hatchet and work on the niche segment of small scooters in Japan. This may well grow to a more profound partnership where countries like India could also see some interesting dynamics panning out.