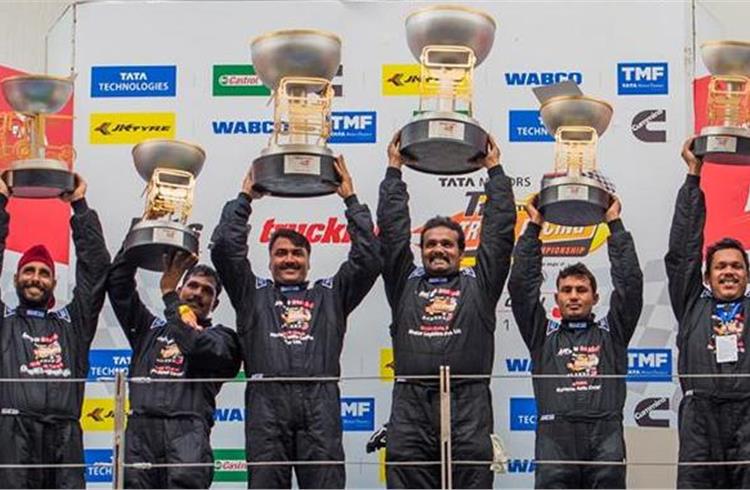 Competing in the Super class category comprising of some of the most experienced drivers, these drivers were selected through one of the most comprehensive training and selection programs, for Indian drivers, from Tata Motors fleet customers’ operations across the country.

Trained by some of the best race instructors in India, roped in by MOMA, over a period of three months, the T1 Prima race attracted over 50,000 people, with the ‘Heroes of the Highways’ taking home the highest price money ever for an Indian motorsports event – Rs 10 lakh – being awarded to each of the first place winners, of the two Super Class category races.

Mat Summerfield of Team Castrol Vecton, winner of the first eight-lap race, clocked the fastest lap of 1:50:691 seconds, in the second race, around the 3.1-kilometre race track.

The 370bhp Tata Prima 4038.S trucks had a top speed of a little over 130kph. To make these trucks for racing, key modifications were made to meet a mix of safety and performance needs as per guidelines from the BTRA. These included significant changes in fuel tank, brake cooling system, propeller shaft guards, racing seats and safety belts, exhaust, steering wheel among others.

Some of the changes include a reduced centre of gravity by 100mm to improve dynamic stability at high speeds; lighter suspension system to improve the ride and handling characteristics; improved shock absorbers for stability during high-speed corner turns; improved brake cooling system with jet nozzles; lightweight aluminium fuel tank and water tanks; 315/70 R 22.5 tyres introduced in place of 315/80 R 22.5 from last season and front flat wheel where mounting face offset is 127 in place of 175 from the 2015 season.