Likith, who is a diploma holder in Mechatronics from the Toyota Technical Training Institute, was under training for this competition since January 2022. 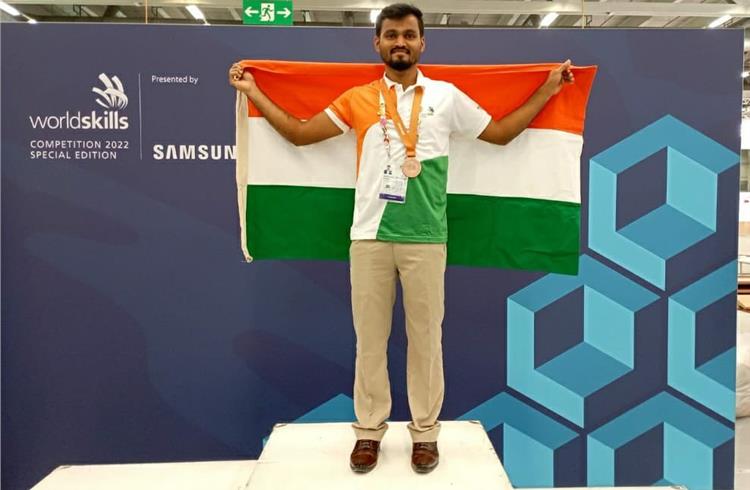 India’s Likith Yemmedoddi Prakash has won the bronze medal in Prototype Modelling at the ongoing WorldSkills Competition 2022 (WSC2022). He was part of a six-member competition involving contestants from India, Japan, Kazakhstan, Korea, Chinese Taipei, and Thailand. These six competitors in Prototype Modelling are the first to showcase their skills as part of WorldSkills Competition 2022 Special Edition that began on September 7 in Bern, Switzerland.

Likith has completed his diploma in Mechatronics from Toyota Technical Training Institute (TTTI) and was under training for this competition since January 2022. Likith YP, who has previously won India’s National Skill Competition ‘India Skills 2021’ in prototype modelling, received training by Toyota India expert Bhaskar Singh, who is also a chief expert in Prototype Modelling Skill at the WorldSkills International platform.

Over the years, TTTI students have also been participating in world-skill contests held annually, winning many highest accolades and medals by competing with global participants.

WorldSkills Competition is an international competition of skilled youth between member countries of WorldSkills International. Prototype modelling, one of the many skill competitions, is about creating prototypes that allow engineers and designers to test, assess, and modify during the process of product development.

This year's global contest was scheduled to take place in Shanghai but due to covid outbreak over there, it was relocated to 15 countries to be conducted over the span of 2 months.

TTTI as a skill developer
Toyota Technical Training Institute (TTTI) is recognised by the National Council of Vocational Training (NCVT), Japan-India Institute for Manufacturing (JIM), Automotive Skill Development Council (ASDC) and Directorate General of Training (DGT). Its three-year residential training program focuses on holistic development by imparting deeper knowledge in automobiles, enriches their skills as craftsmen and body development by engaging in physical fitness activities. To develop their mind and attitude, experiential learning is provided through shramdaan, service in orphanages and underprivileged communities.

To create world-class manpower in advanced technologies and manufacturing, Toyota Kirloskar Motor (TKM) has undertaken a major expansion of TTTI with capacity going up from 200 to 1,200 students (academic batch-wise).  This will be a major boost to the existing skill facility in its Bidadi plant with a focus to scale-up students’ skill levels on advanced technology, by Toyota expert trainers (globally certified).

TKM has trained more than 77,360 employable youths through various skill development initiatives. TKM has collaborated and is engaged in developing one Industrial Training Institute (ITI) in every district of Karnataka (31 districts). Through Toyota Technical Education Program (TTEP), TKM continues to develop trainees in 49 Institutes, across 17 States in India. Further, TKM has tie-ups with Government of Karnataka, Kerala, Odisha, Tamil Nadu, Maharashtra, Haryana, New Delhi and Telangana, providing skill enhancement to students and faculty members. Over the years, TKM’s skill outreach has expanded on a larger scale, creating world-class skill champions.