The premium hatchbacks sold by the top two carmakers in the Indian market continue to battle hard for the consumer’s vote. 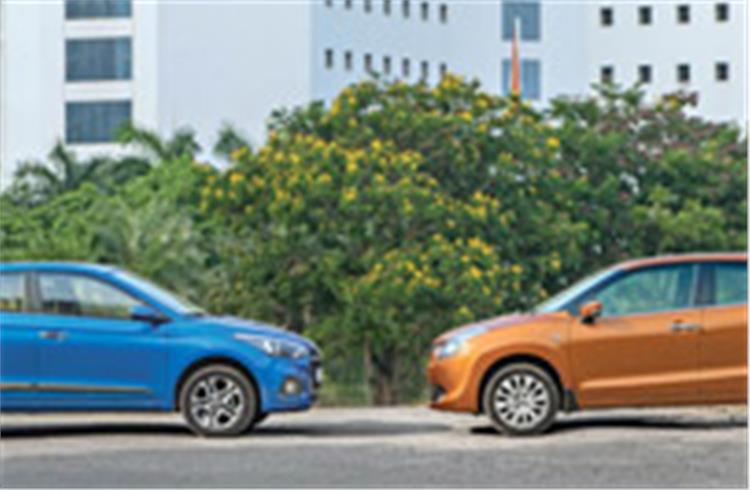 For anyone looking for a premium offering in the B+ hatchback space in the Indian passenger car market, the Hyundai Elite i20 and the Maruti Baleno have long been the topmost contenders. What has helped these two cars in the recent past is the return of demand to the passenger car market.

The snazzy Baleno, Maruti Suzuki’s answer to the i20, rolled into the market just a year later in October 2015. Since then, the hatchback has gone on to register overall sales of 395,791 units until end-May 2018, just 4,209 units short of the 400,000 units milestone. Considering this Baleno’s average monthly sales of 12,767 units, the stylish hatchback would have easily driven past the new landmark of 400,000 units last month in the domestic market. In fact, in May 2018, the Baleno sold nearly 20,000 units.

While the two cars exchange punches in terms of features, comfort, safety and transmission options on offer, the Hyundai Elite i20 comes across as a slightly better overall package when it comes to choosing a well-balanced family hatchback. The Baleno, on the other hand, comes backed by Maruti’s well established brand name and also undercuts the i20 in terms of price, thus maintaining its value-for-money aspect.

While the Hyundai Elite i20 sold through the company’s near-500 retail outlets all across the country, the Baleno is retailed through Maruti’s premium retail chain – Nexa – whose showroom strength currently stands at around 300 outlets.

Hyundai’s 1.4-litre diesel unit in the hatchback being much more powerful as well as frugal than its 1.2-litre petrol counterpart has made the i20 see over 38 percent (186,946 units) of its sales coming from diesel, while the petrol comprised 304,282 units until end-May 2018. However, with its supremely refined 1.2-litre petrol engine, which offers good fuel efficiency as well, the Baleno has seen the majority of its sales coming in from the petrol motor, which clocked a substantial 81 percent (319,059 units) of its total sales, while diesel comprised a relatively low 76,732 units till end-May 2018. The option of a CVT automatic in the Baleno’s petrol variant is also responsible for the petrol variant higher numbers.

Older to the Baleno by a year, the Elite i20 recently went on to receive a makeover at the 2018 Auto Expo, getting a host of aesthetic updates, including a revised front grille, alloy wheels, bumpers, and tail lamps. Hyundai also brought in a significant mechanical upgrade, equipping the car with a CVT option with its 1.2-litre petrol version and pitching it directly against the Baleno automatic.

If the sales trend for both hatchbacks continues, the hard-charging Baleno will narrow the gap with the i20 to around 50,000 units by March 2019.

With the Baleno now due for a mid-lifecycle update, the fight between the two is set to continue but only until the Kia Rio comes in and likely unsettles the market with its sharper styling and plusher packaging.