Honda Cars India is facing a capacity crunch at both its manufacturing facilities at Tapukara in Rajasthan and Greater Noida. 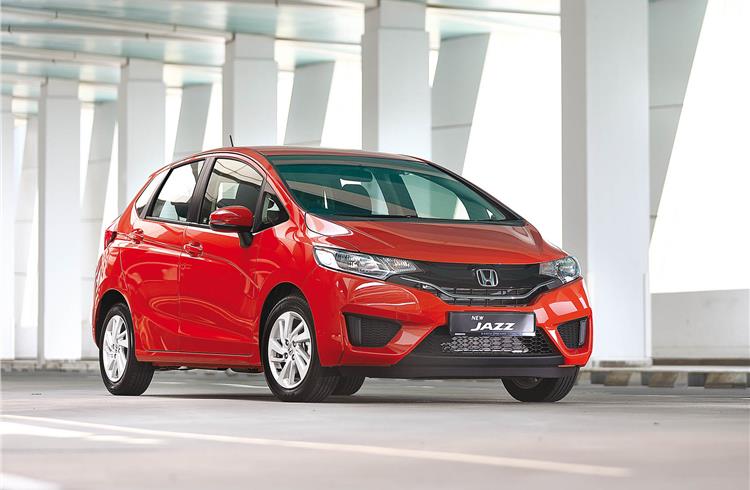 Honda Cars India is facing a capacity crunch at both its manufacturing facilities at Tapukara in Rajasthan and Greater Noida. Both factories, which are currently running two shifts, have reached 100 percent capacity and with the launch of the third-generation Jazz around the corner in July in the domestic market, a juggling of production schedules is imminent.

Most likely to face production cuts will be the Brio hatchback which, after reaching its peak volumes of 3,000 units per month, is now seeing flagging sales. In March 2015, the car registered sales of 1,642 units but the number was down to a little over 800 in April.  A reason cited for its declining fortunes  is the lack of a diesel motor and it’s a diesel engine with which the Amaze and fourth-generation City sedans have been front runners for the past many months.

Even before the India launch, exports of the Jazz to South Africa have kicked off early this year. Last month, HCIL exported 853 cars of which the main models were the City, Brio, Amaze and the Jazz. In March, the export figure was 691 with the key export markets being South Africa and Nepal.

As Katsushi Inoue, the new president and CEO of Honda Cars India, starts his India innings he has a challenging task cut out for him. He has to take a growing company a step further – HCIL posted 41 percent growth in 2014-15 with sales of 189,062 units.

In an introductory meeting with media personnel in Delhi, Inoue indicated his intent to step up the customer base in the country to 1.4 million by 2017 from the existing 900,000.

“This market is really important for our global operations and we have expanded our dealer network to 232 outlets in 152 cities. This has helped tap new markets and new customers in smaller cities. So we have built a strong foundation for future growth,” he added. This fiscal, the dealer network will be further ramped up to 300 outlets in 200 cities with 48 outlets added in Tier 3 cities. The new Accord sedan is also believed to be on the radar.

“Actually cars should cater to local people’s tastes and demands and in doing that we have to reinforce our R&D function in India. That is now ongoing,” he said.

To achieve this goal, HCIL’s in-house R&D setup is working closely with the R&D division at Honda Motor Company, Japan, to develop high-quality vehicles with advanced technologies especially in design and features. One of the outputs is the new Jazz that has been developed in Japan. Going forward, the focus will be on localising R&D development.

However, it won’t be long before HCIL will have to look at a third plant to further ramp up capacity though earlier this year it announced an investment of Rs 380 crore in its Tapukara plant where the Jazz is being made. This will increase the plant’s annual production capacity from the current 120,000 units to 180,000 units by mid-2016 and generate employment for about 600 people.

This expansion will also take up overall annual production capacity from the current 240,000 units to 300,000 units including the 120,000-unit capacity of the Greater Noida plant.

Meanwhile, the build up to the Jazz launch has gone digital and online. The new Jazz is expected to carry forward the 90 percent localisation drive that marks other Honda cars except the CR-V.  “Only some electronic parts and airbags have still to be localised,” elaborates Jnaneswar Sen, senior VP (sales and marketing).

The Jazz’s volumes will depend on its pricing but the carmaker is pulling out all stops to ensure that the car is both competitive and successful, unlike its predecessors which sold only a few hundred units and were attributed to be ahead of their time in the Indian market.