Thanks to the FAME India subsidy for EVs, the Flash has an introductory price of Rs 19,990 (ex-showroom Delhi). 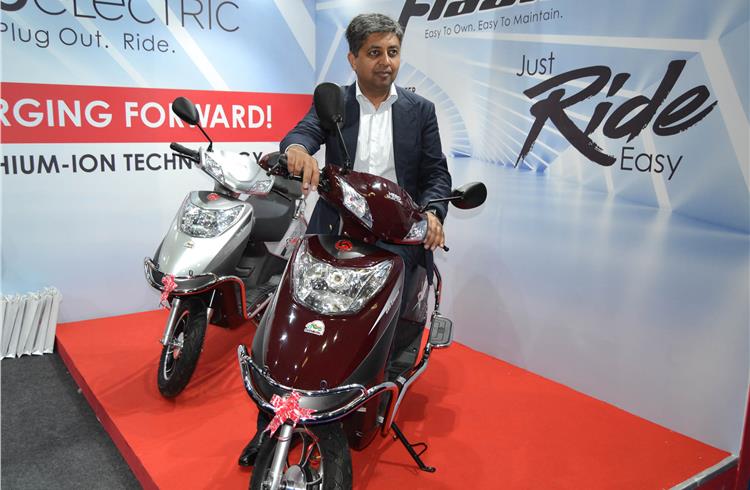 Hero Electric today launched its latest model, the Flash e-scooter powered by a lead acid battery. The Flash, which is equipped with a 250 watt motor and a 48 volt, 20 Ah VRLA battery, can travel for 65 kilometres on a single charge and has a top speed of 25kph.

Available as a limited edition model with just 2,000 units for sale, the Flash has an introductory price of Rs 19,990 (ex-showroom Delhi). The price is inclusive of the government subsidy of Rs 14,000 for electric vehicles as it is a collaboration between the Department of Science, the Society of Manufacturers of Electric Vehicles (SMEV) and Hero Electric.

The light, 87kg Flash e-scooter does not require a riding license or registration, a step that is expected to make it popular amongst youth. Some of its features include magnesium alloy wheels, a telescopic suspension and a full body guard. It is also equipped with short-circuit protection and has under-the-seat storage. It will be on offer in twin colours- the red black and silver black shades. The Flash is available in red-black and silver-black colour combinations.

Sohinder Gill, CEO, Hero Electric told Autocar Professional on the sidelines of the launch that, depending on consumer preference, there is also provision to offer a lithium ion battery-powered Flash e-scooter at the low end within a few months. The price differential between the two battery powered scooters is pegged at around Rs 15,000-20,000.

The e-scooter targets youth, housewives, small traders and senior citizens. Despatches of the Flash will commence from next week to Delhi dealerships and it will be introduced across India within a month covering all 350 outlets of Hero Electric.The company plans to add an additional 100 dealers in CY2017 to take the figure up to 450 by the year end.

Gill says that while the lithium ion battery has a three-year lifespan, the lead acid battery comes with a one-year warranty.  To make lithium ion batteries more cost effective, SMEV is looking at local manufacturing; it has 10 proposals in hand which two are to be shortlisted within a month and will require some handholding from the EV manufacturer.

Talking about online bookings for e-scooters, Gill pointed out that over the past two months when demonetisation had hit dealer sales, the company sold a large volume of its Maxi, Wave and e-spring scooters through PayTM and has started online bookings for the Flash as well.

Reacting to the Union Budget 2017-18, Gill appreciated the Rs 175 crore allocation for the three months till start of April on account of subsidies for EVs by the government.