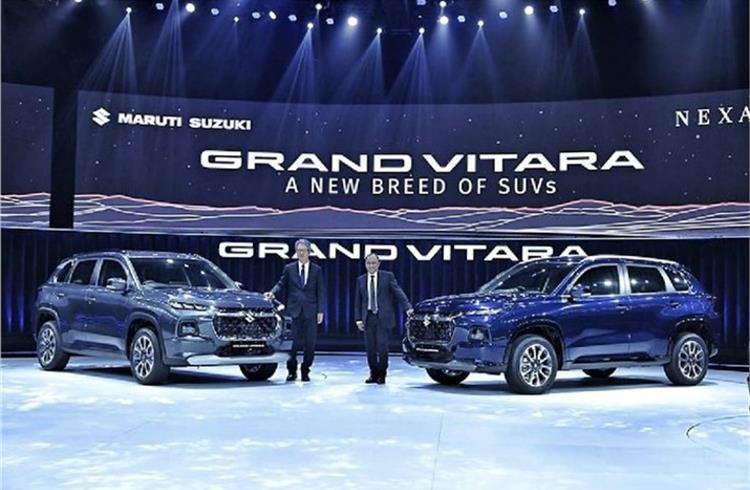 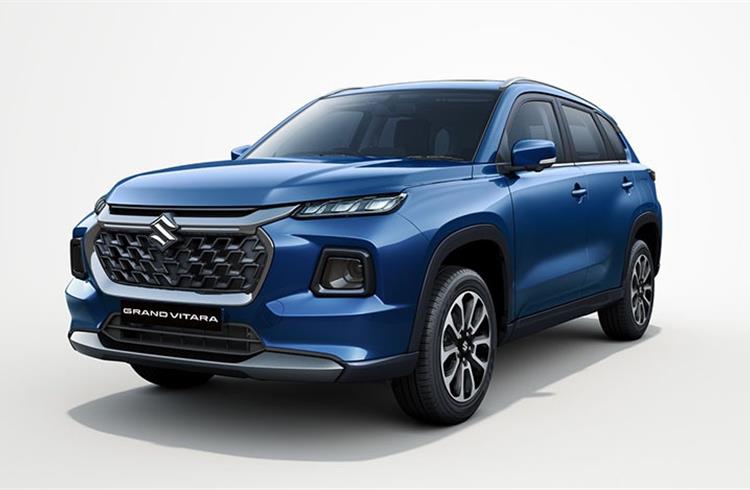 The fifth-gen Maruti Suzuki Grand Vitara will go on sale in India first, and is expected to be sold in multiple overseas markets. 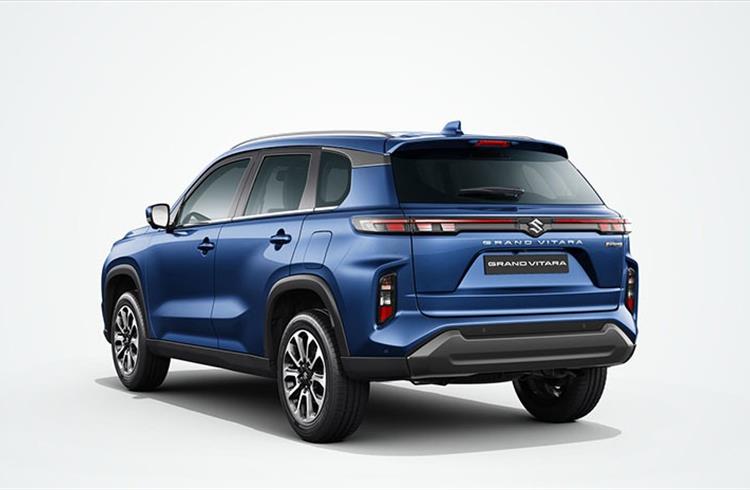 The Grand Vitara has been developed jointly with Toyota, and will be built at latter's Karnataka plant along with its sister model – the Hyryder SUV. 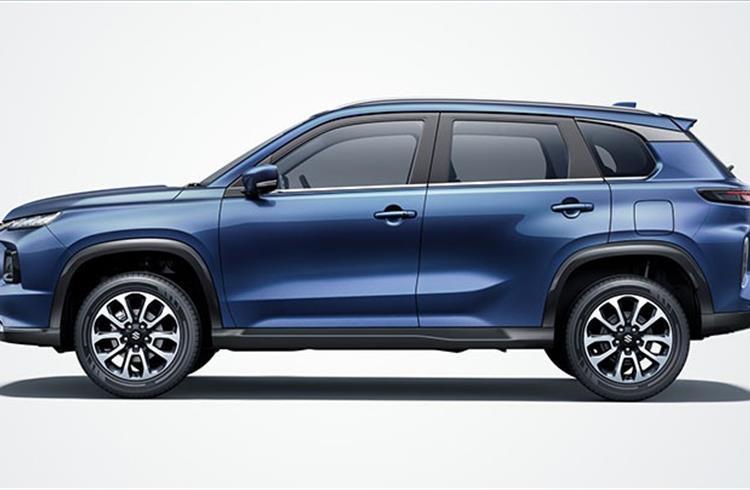 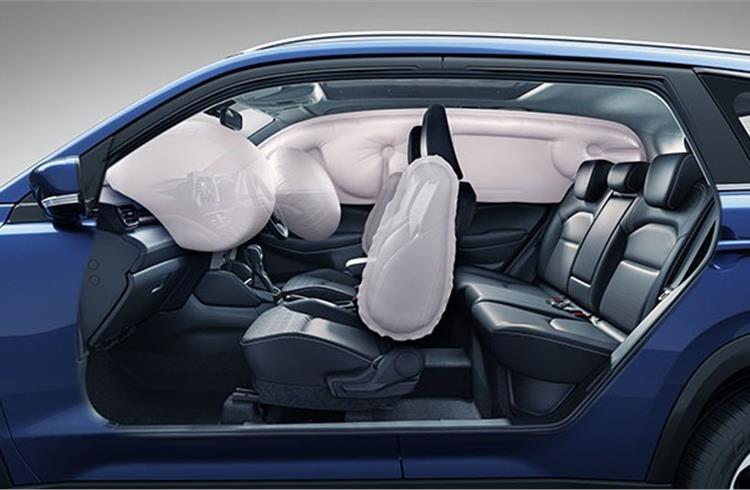 Grand Vitara is big on safety. It gets ESP, hill-hold assist, tyre pressure monitor, all-wheel disc brakes and as many as six airbags. 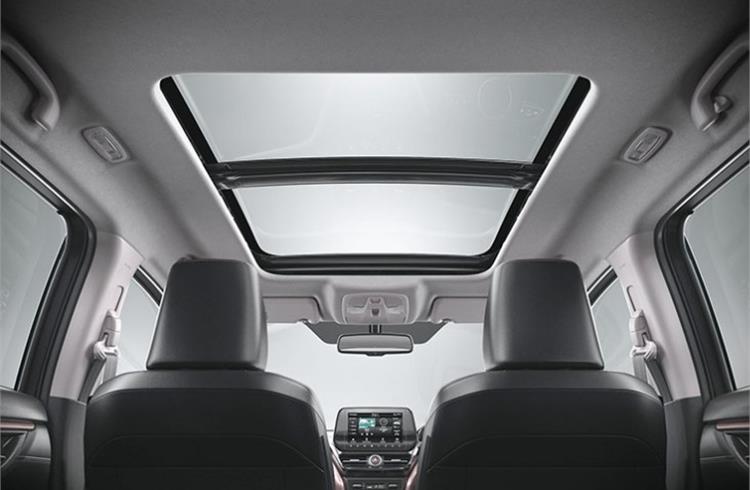 Grand Vitara becomes second Maruti model after new Brezza to get a sunroof. 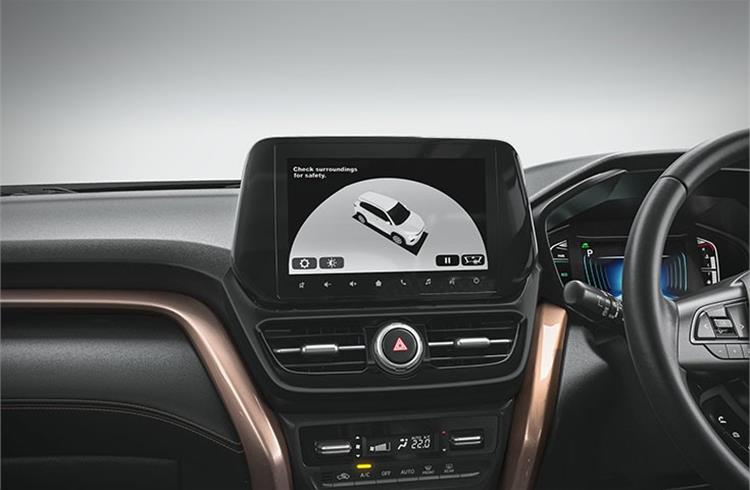 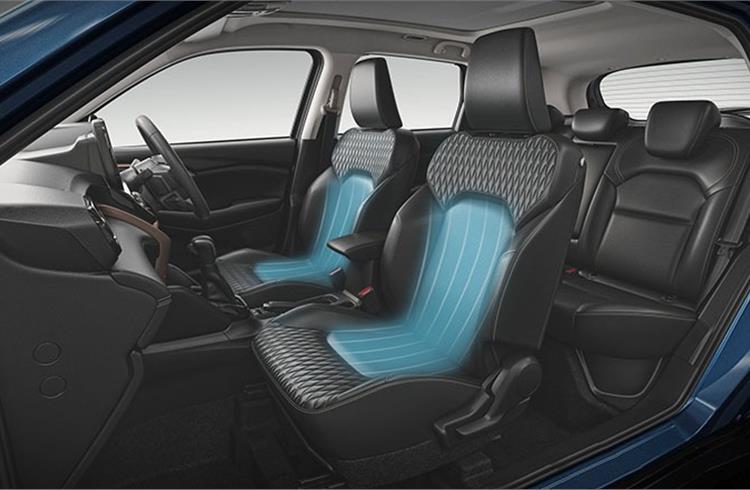 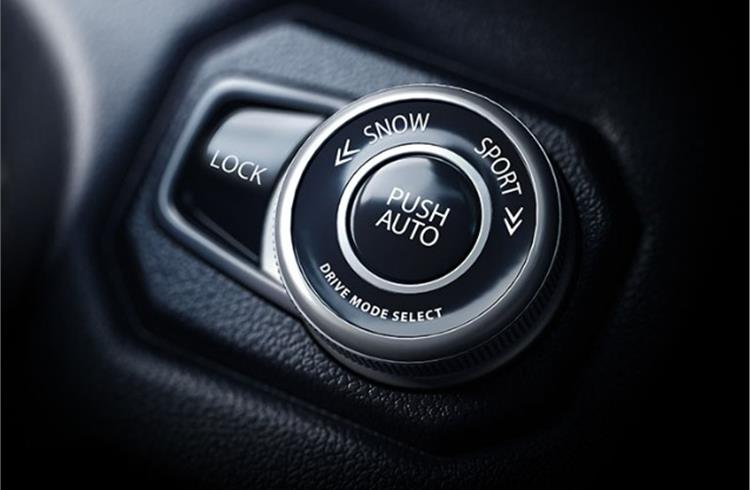 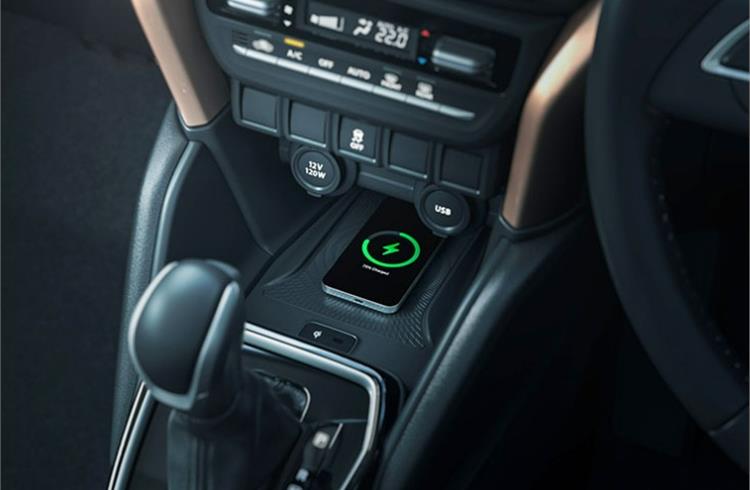 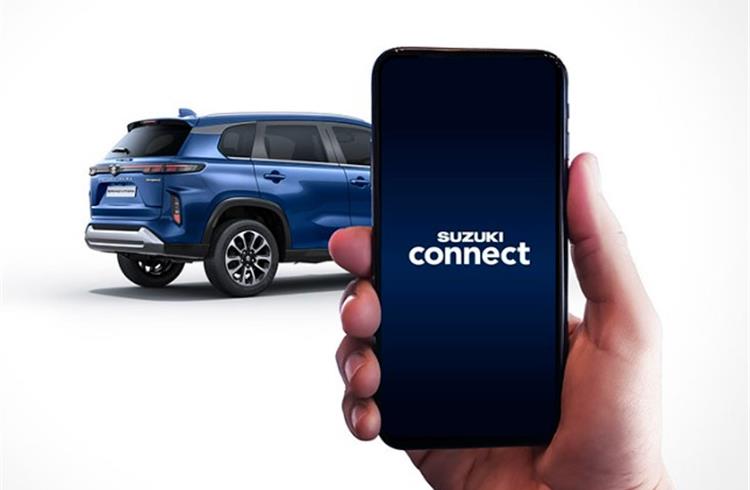 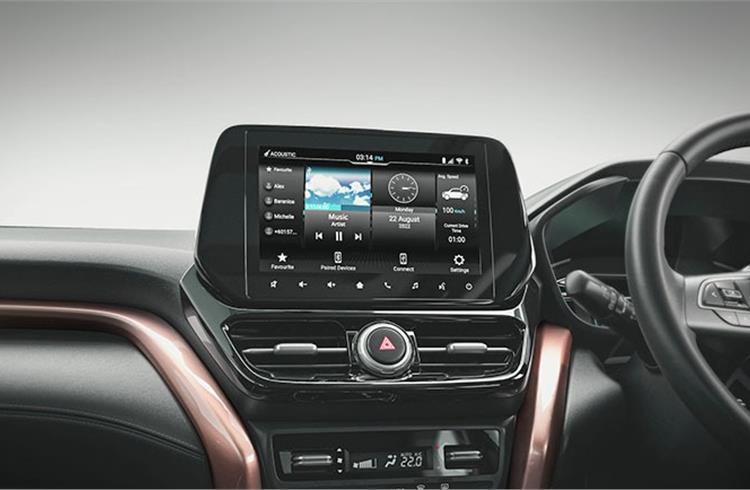 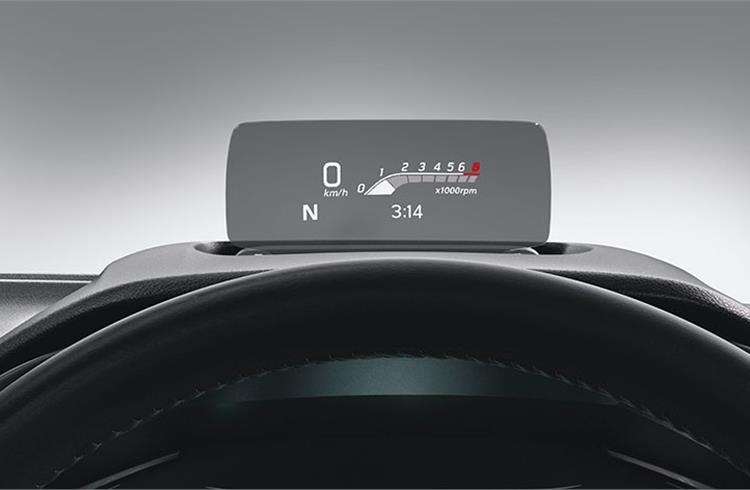 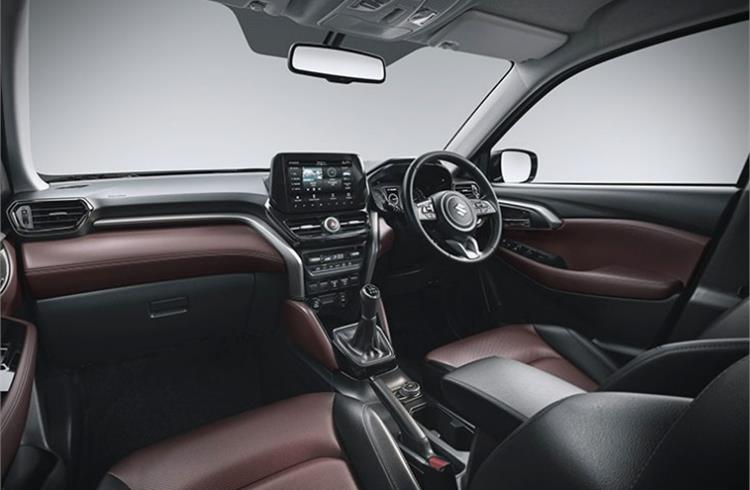 Maruti Suzuki has unveiled its SUV, the Grand Vitara which it said features a distinct exterior design, sophisticated interiors, segment-leading features and an industry redefining fuel-efficiency powered by its revolutionary hybrid powertrains.

The SUV will be the company’s fifth-gen offering and will go on sale in India first, and is expected to be sold in multiple overseas markets. It has been developed jointly with Toyota, and will be built at latter's Karnataka plant along with its sister model -- the Toyota Hyryder SUV  -- that was unveiled a month ago. The Grand Vitara will be made exclusively in India. The Grand Vitara will be sold through Maruti's premium Nexa dealership network. 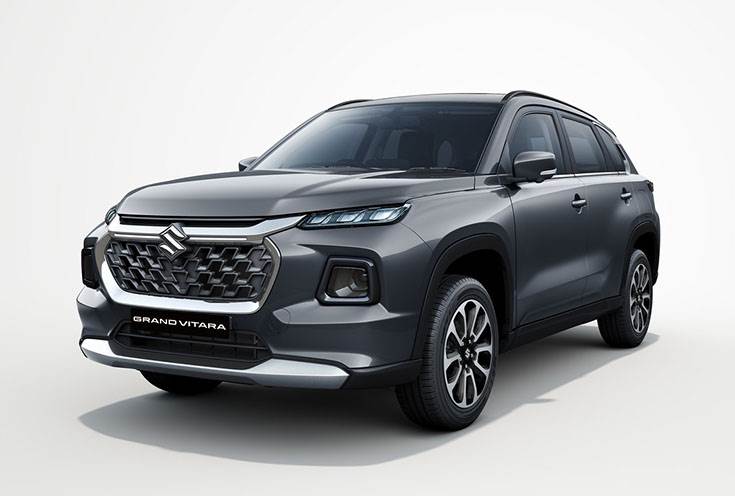 For Maruti, a lot is riding on this launch as the company is in a very competitive market for SUVs taking on rivals such as the Hyundai Creta, Kia Seltos, VW Taigun and Skoda Kushaq. While the company has a 67 percent share in the non-SUV segment, its share in the SUV segment is about 12 percent.

Both the Grand Vitara and its Toyota badge-engineered sibling will share a platform, powertrain, some body panels and interior, but will have unique exterior styling and differences in trims.

The Grand Vitara will be Maruti’s first full hybrid in the Indian market. Deliveries are expected to begin around the festive season. 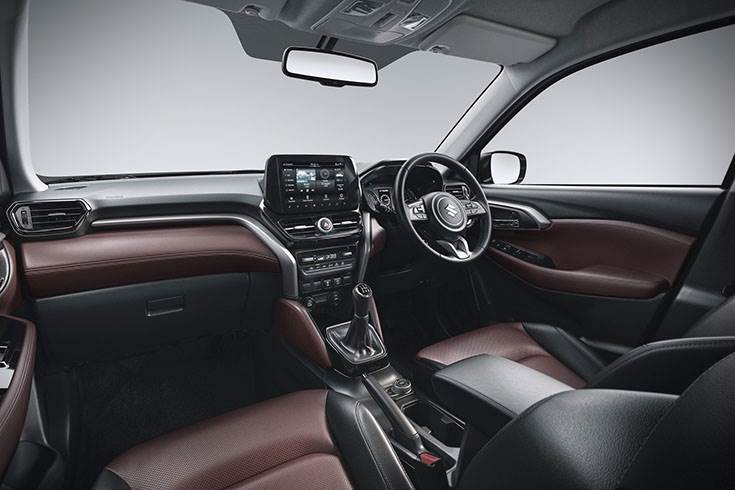 The inside story
The Urban Cruiser Hyryder and the Grand Vitara share common bits on the inside. The Grand Vitara gets faux leather with contrast brown layout. In terms of features, the Grand Vitara gets comprehensive equipment, ventilated seats including a head-up display, a 9-inch Smart Play Pro Plus touchscreen infotainment system with connected car tech and even a panoramic sunroof, with the latter being a first on any Maruti Suzuki product sold in India so far. Other common bits shared with the Hyryder and other Maruti Suzuki products include the AC controls, AC vents, steering wheel and power window switches.

Multiple powertrains
After the Urban Cruiser Hyryder, the Maruti Suzuki Grand Vitara is the second midsize SUV in India to come with a strong-hybrid powertrain. Shared with the Hyryder, the hybrid powertrain is Toyota’s 92hp, 122Nm, 1.5-litre TNGA Atkinson Cycle engine, which is paired to an electric motor that makes 79hp and 141Nm of torque. Combined power output for the hybrid power plant is 114hp and it is paired to an eCVT gearbox. Like the Hyryder, the Grand Vitara also boasts of an electric-only range of up to 25km.  Maruti has confirmed that this powertrain option delivers a company claimed 27.97kpl.

Additionally, Maruti Suzuki is also offering its 1.5-litre K15C mild-hybrid engine with the Grand Vitara. First seen on the Ertiga and XL6 facelifts, and more recently on the new Brezza, it develops 103hp and 117Nm of torque. The engine will be paired either to a 5-speed manual or a 6-speed automatic gearbox with paddle shifters and be offered with Suzuki’s All-Grip AWD technology. This engine option does a company claimed 21.11 kpl for the 2WD manual variant, 20.58 kpl for the automatic and 19.38 kpl for the AllGrip AWD. 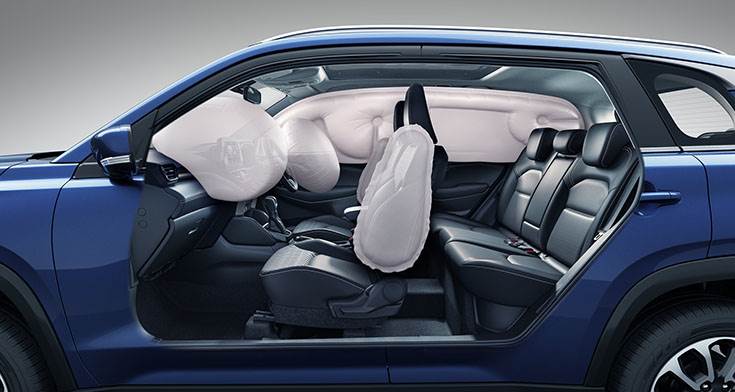 When it comes to safety features, the Grand Vitara gets ESP, hill-hold assist, tyre pressure monitor, all-wheel disc brakes and as many as six airbags.

Speaking at the product reveal today, Hisashi Takeuchi, MD and CEO, Maruti Suzuki India said, “Maruti has led the market with its slew of new product launches across segments, catering to the diverse needs of the new-age Indian customer. With the global unveiling of the Grand Vitara, we bring an SUV which embodies the best of Suzuki design, technology and performance. Packed with the Suzuki ALLGRIP legendary off-roading prowess as well as a strong & aggressive design, it inherits the pure SUV DNA of the iconic brand, Vitara. Moreover, with the introduction of the revolutionary Intelligent Electric Hybrid system, the Grand Vitara paves the way for a cleaner, greener, sustainable and carbon-neutral world.”

Shashank Srivastava, Senior Executive Director (Sales & Marketing), said, “The SUV segment has grown tremendously in the past four years as customers have shown a strong inclination towards an assertive design, dominant road presence and new-age technology. With our diverse product range, Maruti Suzuki has been a leader in the UV segment continuously for the last five years.”