The 2018 awards recognised the domestic manufacturing excellence across the Industry spectrum, with 28 companies being awarded across four major categories. 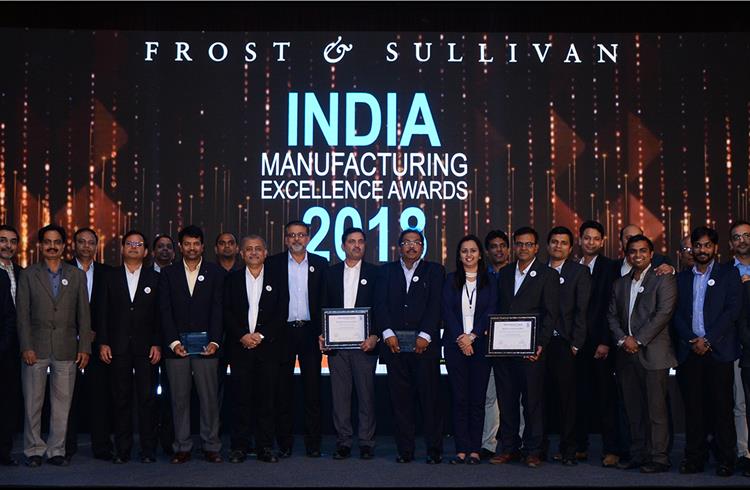 The Frost & Sullivan's India Manufacturing Excellence Awards (IMEA) 2018, completed 15 years of recognising the best manufacturing practices and future-ready companies in India. The event held on December 6, 2018 in Mumbai, saw the who's who of industry leaders participating the awards to recognise the companies who have excelled in the field of adopting future-ready practices in the country.

These 2018 awards were presented to 28 companies across four major categories: Indian Manufacturer of the Year Award;  Future Ready Factory of the Year Award; Gold Award and a new, fourth category Smart Factory Award. The scores of Industrial Internet of Things (IIoT) readiness assessment and IMEA assessment were collated to finalise the winners of the ‘Smart Factory Award’ category.

Speaking on the IMEA journey, Nitin Kalothia, director, Manufacturing and Process Consulting Practice, Frost & Sullivan said, “Adoption of Industry 4.0 principles will be critical for the competitiveness of Indian industries in the future. A few of the futuristic Indian companies are already reaping the benefits of IIOT adoption. With advances in technology, need for advanced manufacturing practices in the country, and their improved affordability, IIOT will be the next driver of manufacturing competitiveness.”

During the event, Frost & Sullivan’s GIL (Growth, Innovation & Leadership) Index for manufacturing competitiveness in India ranked Maharashtra as the number one state demonstrating the highest potential for manufacturing investment. Subhash Desai, Minister for Industries and Mining, Government of Maharashtra accepted the award. The research-based index evaluated each of India’s 29 states across 30 indicators and facilitated the state-wise comparisons. It followed a robust, data-driven indexing methodology that weighed the indicators of each state over three pillars, which included -- Growth;  Innovation;  and Leadership.

This year, Mahindra & Mahindra was awarded the 'Indian Manufacturer of the Year', along with being presented for the Smart Factory Award. Frost & Sullivan also felicitated Pradeep Banerjee, executive director - Supply Chain, Hindustan Unilever; K R Srivasatava – CEO, UPL and P Kaniappan, MD, Wabco India with Lifetime Achievement Award, for their leadership skill, recognising their contribution to the manufacturing sector. The awards banquet celebrated 15 glorious years of IMEA’s exciting journey with over 850 manufacturing units being assessed over this period. 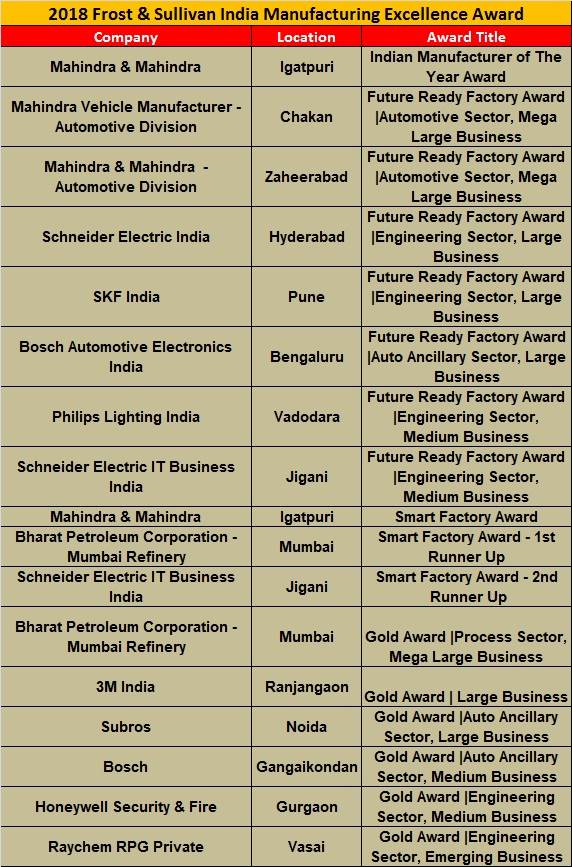