Employees are also unhappy with the severance package that the company is offering. 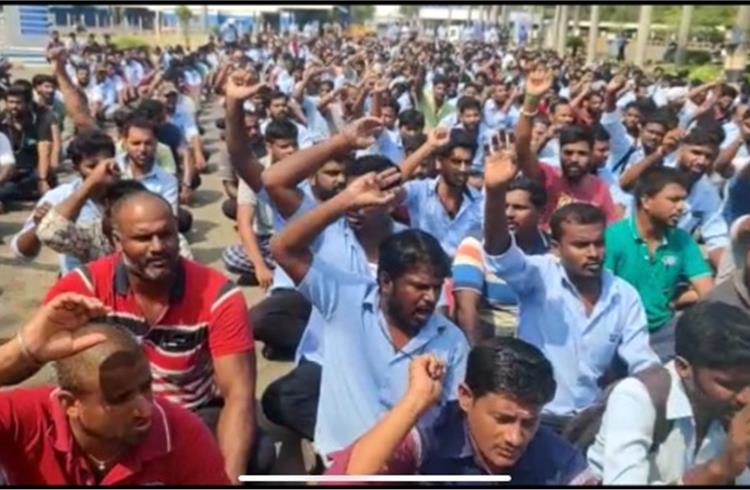 It is not just the 2,000 plus workers whose livelihoods are at stake but also their families apart from ancillary suppliers. 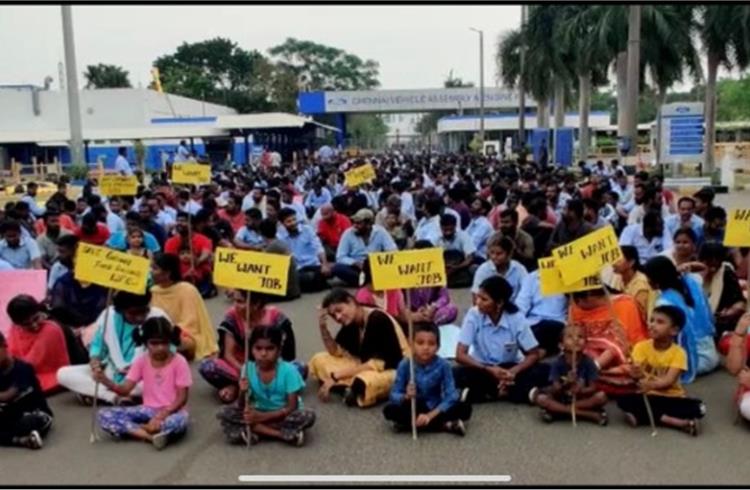 Women have been part of the protests outside the plant

“We want our jobs,” is the single voice being echoed across the Ford India workforce at the Maraimalainagar facility which shuts down all operations by the end of this month.

Its employees have been protesting here over the past 10 days asking for their jobs to be retained or a better settlement package. Many workers have actually left their homes and chosen to stay put at the plant for a week now. Women are part of the protests too and what is unfolding is a story of despair and hope.

About three weeks ago, Ford had sought a written assurance from employees that they would not protest within the facility and continue working until operations came to a complete halt and the factory shut down.

The workers, however, did not sign this agreement and have been striking since then. They buy food from outside with their own money and through the Union. Those who were earlier protesting in the shopfloor have now come out to continue this near the factory gates. Consequently, production has come to a grinding halt.

According to a large section of employees, the company is looking at ways to solve the impasse. “They have also shut the toilets inside the facility,” complains a worker who would rather stay anonymous. Some are willing to go on record like Karthik, for instance, who has been working at the plant for the past 12 years.

He insists that the severance package offered is very small making it difficult to survive when he is rendered jobless in the coming weeks. “We have home loans, our kids are at school and our family depends on our incomes. It will be really tough for all of us to get employment elsewhere,” he rues

Balaji, who also came on board with Karthik  way back in 2010, chips in to add that the ideal scenario would be to have another company take over operations. “All we want are our jobs,” he says matter-of-factly.

A woman employee who is part of the protests echoes Balaji’s sentiments. According to her, there are around 70 women in the facility (of the total workforce of over 2,000) and the average age is barely 30. “We started our work lives here and if we have to leave, it will be tough to get another job. This is especially difficult for women when it comes to getting employed in the auto industry,” she says.

There is a lot of hope in the air that a miracle might actually occur and the show will go on. The harsh reality is that a large chunk of these women planned their future based on their tenure at Ford India. “We come from small towns and villages, stay at nearby hostels and commute to work. Most of us are the first graduates in our family and we are hopeful of a bright future. Today, our dreams are completely shattered,” she chokes.

The fact that the other Ford facility in Sanand, Gujarat, has found a buyer in Taya Motors is akin to applying salt on the wound for the Chennai workforce. From their point of view, this is the legacy plant which marked the beginning of Ford’s journey in India. While the employees in Gujarat, albeit a smaller number, have got a lifeline, the ones here at Maraimalainagar have been left out in the cold.

Lakshmi Narayanan of the department committee, Ford Union has this to say. “The factory at Sanand was started because the one here in Chennai was making profits. While we were part of this effort, workers at Sanand have their jobs assured and we have been left out.”

Clearly, the feeling is that the Gujarat government went the extra mile to support the workforce at Sanand while the same levels of perseverance are not being seen in Tamil Nadu. Employees at Maraimalainagar hope that the state government will lend some support but there are no signs of this happening so far.

There is also a lot of anger building up against Ford. “The company had used the term restructure. What if they send us out with a settlement and rehire workers? They can also revive operations with a JV or sell the plant to another buyer who will hire new workers,” complains one of them.

It is irrelevant that Ford has already made known that it had also shelved the Centre’s PLI proposal to make electric vehicles in India for supplies worldwide. Till that was in the air, there was hope that Maraimalainagar would perhaps stand a chance of being rebooted for this exercise. Ford has, however, made it clear with the PLI burial that its India story has come to an end.

Not many people are buying the story though. “Ford gave a commitment that they would not come back and said a settlement was the best they could do. However, the company was approved for the PLI scheme and we got to know this from the media,” says another worker.

The underlying message is that all the trust built over the years has been lost. “We were really sad to hear the news of their departure but news like the PLI only means that they have not been transparent with us,” he continues. It is this fact that goads them into believing that the company may still plan a new India business model but without the current workforce.

Shiva, who is part of the protesting workforce, is hopeful that the company will “sit and talk”. He is categorical about not accepting any settlement. “That is not the solution especially when we have worked for so many here and gave our sweat and blood to this facility. I came on board many years ago as soon as I finished my diploma. Many of us have worked on 2-3 shifts and even overtime for the company’s benefit. And this is how they treat us,” he laments.

As he puts it, it is not just the 2,000 plus workers whose livelihoods are at stake but also their families apart from ancillary suppliers. “Shutting this plant will affect around 40,000 families. Some suppliers have also announced that they are closing down their operations. The Tamil Nadu government will have to take appropriate steps,” says Shiva.

This is not going to be easy by any stretch of imagination even while earlier reports indicated that Hyundai and Ola Electric were open to the idea of acquiring the Maraimalainagar facility. What is also a cruel coincidence is that General Motors is facing a similar issue at Talegaon near Pune where the original suitor, Great Wall Motors, is not likely to wait forever to get a foothold here.

By all indications, both Ford and GM will shut down their plants by end-June and that could be the beginning of more problems for the governments of Maharashtra and Tamil Nadu if violence breaks out. In these trying times when jobs are impossible to get, the fear of being unemployed and pushed to the wall will only lead to mindless anger. How the two state governments manage the issue remains to be seen.