Delhi-based start-up aims to initiate a new product category and tap into the growing need for alternative propulsion technologies in the PV segment by creating new market model. 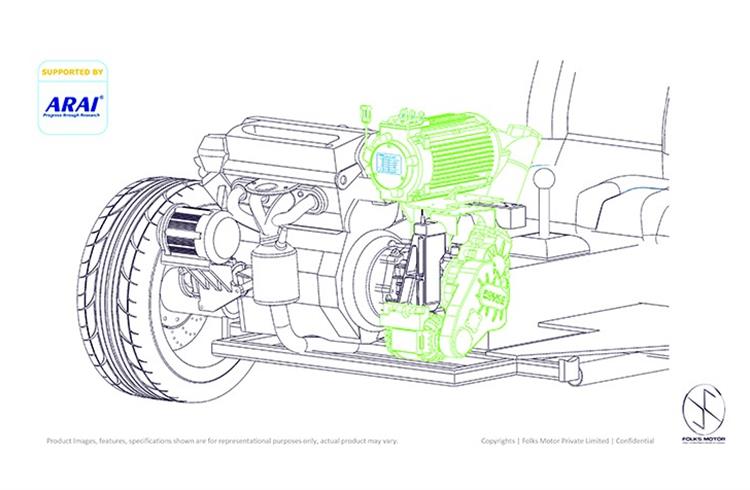 Retrofit xEV platform developed in conjunction with ARAI which has undertaken the design, engineering and validation. 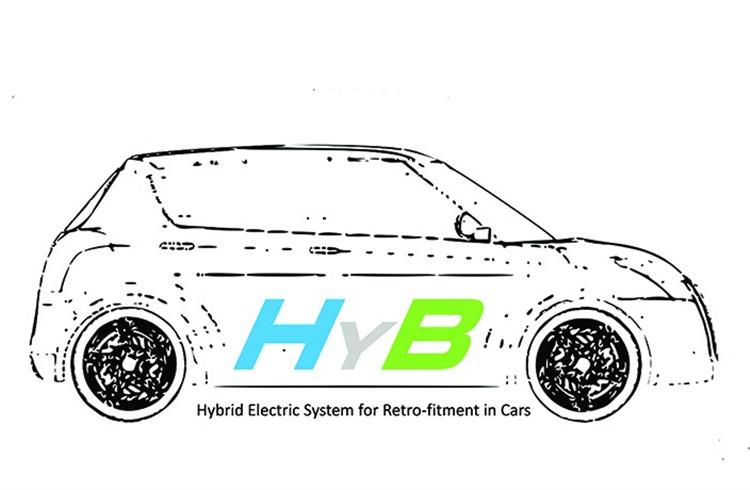 Christened HyB Car Kit, the xEV solution can be integrated in a combination of series, parallel or plug-in-hybrid layouts and aims to minimise losses in an MT car which can be as high as 70 percent. 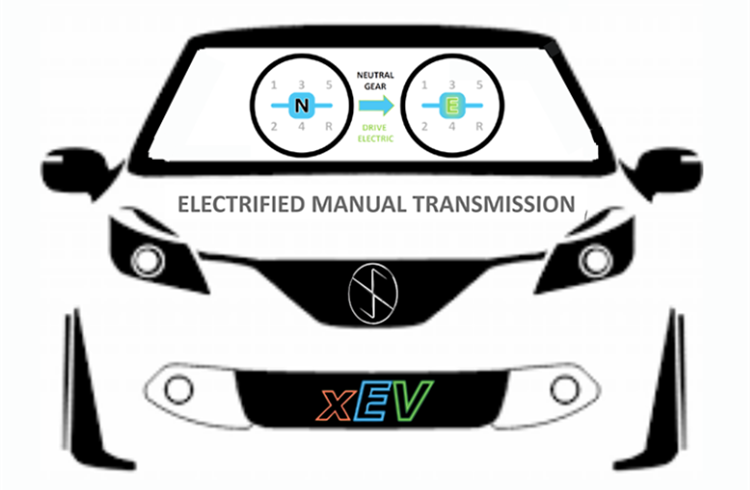 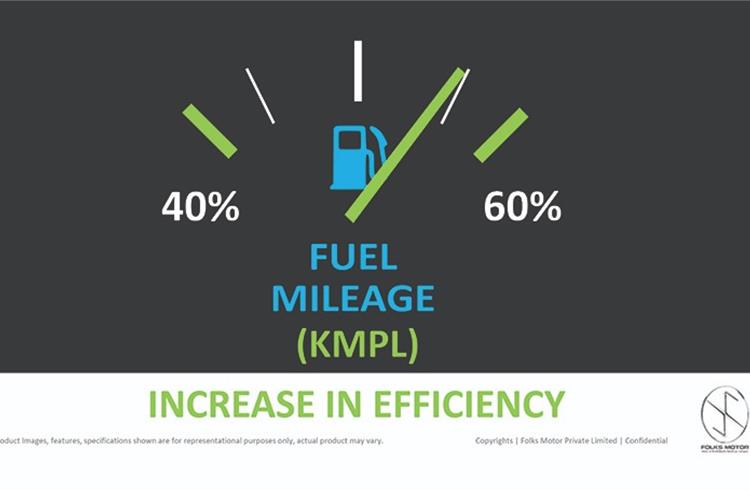 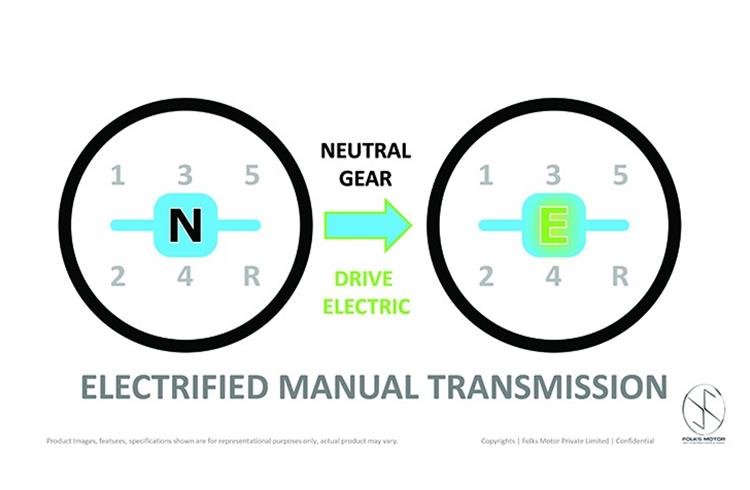 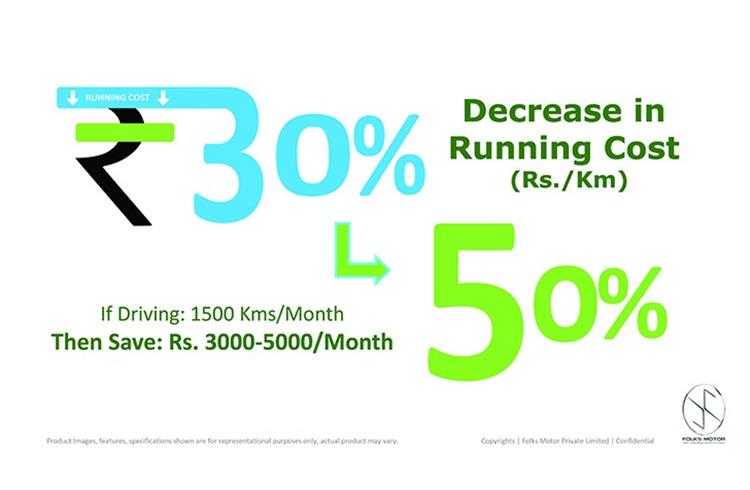 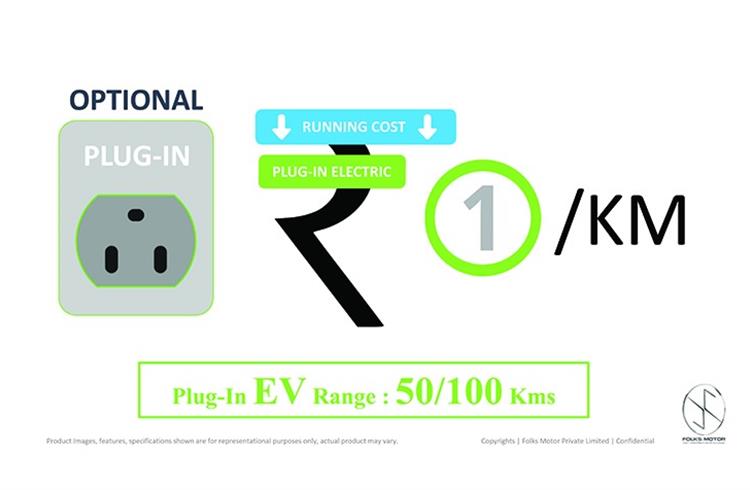 As sustainability and environment consciousness pick up pace in the automobile industry, there is a growing need for greener mobility solutions to cut down the emissions coming from vehicles at least at the tail-pipe level. While the recent BS VI emission norms have put a strict boundary around OEMs to devise methods to reduce vehicular particulate matter (PM) emissions, it has also spelt the demise of diesel engines for many car manufacturers as they prepare to meet even more stringent CAFE norms in 2022.

While on one hand the government is talking about giving a push to alternate fuels such as CNG and ethanol, the stage is also set for innovations such as electrification solutions to cater to the need of the long-distance vehicle user, for whom, driving on petrol would still not count as a pocket-friendly solution. 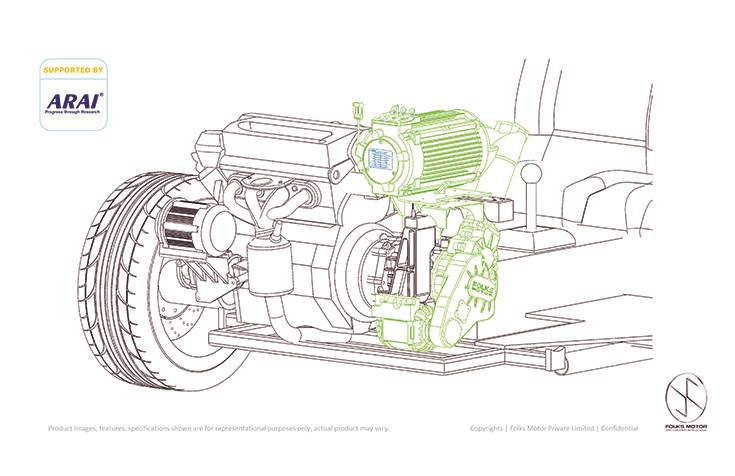 Folk Motor's Retrofit xEV platform has been developed in conjunction with ARAI which has undertaken the design, engineering and validation.

The company has developed a twin-regeneration xEV platform that it aims to install on existing ICE vehicles, making them hybrid-electrics (xEVs) as well as capable of offering full-BEV functionality within city limits. The hybrid- electric (xEV) retrofit kit, which includes a motor, controller and battery, is integrated into the existing driveline of a manual-transmission car, also giving it automatic driving capability up to speeds of 30kph.

Christened HyB Car Kit, the retrofit hybrid-electric (xEV) solution can be integrated in a combination of series, parallel or plug-in-hybrid layouts and aims to minimise the existing losses in an MT car which rake as high as 70 percent.

The company claims to offer a standard warranty of two years or 50,000km and extended warranty of five years, or up to 100,000km, going up to a post-extended package for covering 8 years, 200,000km. However, how realistically would it hold to its promise could be a gamble, given its non-existent automotive experience and only diversifying into this space from a primary business of construction and real-estate development.

While the official market introduction was slated for March 2020, the Covid-19 outbreak wrecked its plans and even yet, the company is working on a revised strategy to roll out its products through a franchise-based model by early-to-mid next 2021.

Folks Motor has already identified between four and six retail partners and is targeting five geographies in the first phase of market launch. These cities include Delhi-NCR, Mumbai-MMR, Bangalore, Chennai and Chandigarh.

“We want to set up a master franchise model and mandate our partners to expand into ten cities by 2021 and open up ten dealerships.” said Nikhil Khurana, MD and CEO, Folks Motor. The company has invested an initial sum of Rs 100 crore, directed from its primary real-estate business and is looking to ramp it up to Rs 500 crore in due course by also setting up its NBFC arm to fund retrofitting of its kits in new as well as old cars.

The system is developed in conjunction with ARAI which has undertaken the design, engineering and validation of product and Folks Motor claims locally sourcing the subsystem components from credible Tier 1 and Tier 2 suppliers in the Manesar automotive belt in Haryana.

The retrofit process involves the integration of the new electric drivetrain into the existing drivetrain of the vehicle, thereby making hybrid mode as the default driving function on the car and eliminating the need of changing through the initial gears in traffic conditions as the car can accelerate up to 30kph in a gearless driving fashion. The system performs as a series hybrid up to speeds of 30kph, after which it works like a parallel-hybrid arrangement.

One could also redeem the full-electric range of up to 50km on sufficient replenishment of the battery pack after around 70km of hybrid driving, claims Folks Motor. Users would also be able to charge the battery by plugging into a wall socket to gain range to drive on the pure-EV mode.

The hybrid-electric system produces a power output of 30kW that translates to 40bhp and the electric charge is supplied by a lithium-ion battery pack installed in the boot, that varies between 8 and 10kWh depending upon vehicle size.

Initially, Folks Motor will offer the hybrid-electric (xEV) retrofit system for cars in the premium hatchback to compact crossover space, including popular models like the Maruti Suzuki Swift, Dzire, Ritz, Baleno and Ertiga. It plans to expand the system’s compatibility to incorporate close to 30 models over a span of three years. While the installation of such a system warrants around 20 percent increase in vehicle weight that could end up becoming up to 200kg heavier, it, however, still offsets the extra load with its 40 to 60 percent incremental fuel economy, as claimed by the company.

Finding the price-to-comfort balance
The company is looking to tap into the transmission losses in a conventional manual transmission vehicle, which range to the tune of 50 to 70 percent. Clearly, at a price tag that would sit anywhere between Rs 100,000 to 200,000, there would be few takers for the retrofit hybridisation solution, but, Folks Motor believes it could convince a lot of fence sitters by showcasing the key distinguished benefits of getting a fully-automatic drive in city-traffic conditions, enhanced fuel economy of up to 30 percent as well as offering full-electric capabilities.

According to Khurana, “If a customer drives around 80-100km in a day, the return on initial investment will be arrived in less than two years, and in the case the customer uses the plug-in function rather frequently, the RoI will be even quicker.”

So, even as the technology of retrofitting a hybrid-electric (xEV) kit on a manual-transmission equipped car was conceptualised more than a decade ago, it is still in its nascent stages clearly because of the complexity involved and the lack of assurance of sound working of the system from a long-term perspective. Renowned players such as KPIT and Bharat Forge which had conjointly developed their hybrid-electric system – Revolo – and showcased it back in 2012 at the Auto Expo, but, the idea didn’t really pick up possibly because it was way ahead of its time.

While Revolo has been transformed into a modular, full-electric drivetrain technology which is currently driving the EV programmes of bus manufacturers such as Eicher Motors, the young start-up from Delhi seems to be attempting its luck at a much more price-sensitive segment where reliability of technology as well as top-notch aftersales support are key forexistence and spreading good word of mouth. Folks Motor is all set to unveil its brand and product in the first quarter of this calendar, with plans to commence retail by Q2-Q2 of FY2022.

Although the company is contemplating tying up directly with OEMs to explore synergies of becoming their official retrofit partners, it would be interesting to see if carmakers would really be willing to jump at the idea. However, with prices of fuel going sky high and a lot of carmakers only offering petrol-only models, Folks Motor could just click with its target customer, someone who wants to enjoy the benefits of cheaper personal commute while also subconsciously contributing to a cleaner environment.