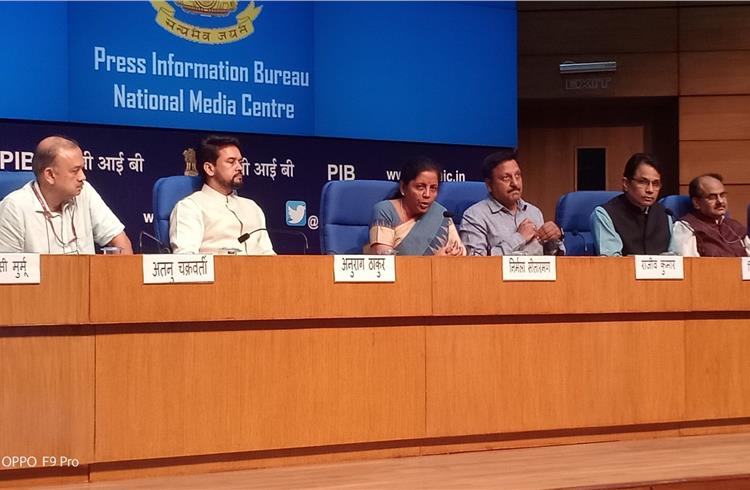 The Indian government has now taken cognisance of the deepening slowdown in the automotive industry. Retail sales across all vehicle sales have seen negative growth for the past 12 months, and plunged to a new low in July 2019. The downturn which began in July 2018 and continued to impact industry adversely month on month, saw strong demand from all automotive industry stakeholders for the government to support industry with some growth-driving measures.

Responding to industry demand, Finance Minister Nirmala Sitharaman today announced a slew of measures aimed at enabling India Auto Inc see a revival in growth. However, the much-demanded reduction in GST from the existing 28 percent to 18 percent saw no mention. Nonetheless, the policies announced will offer much relief to a beleagured domestic industry and also uplift consumer and market sentiment. What's more, these measures coming a week before the festive season kicks in will help consumers advance their purchase decisions and set off a cycle of growth, something industry has been awaiting for long. 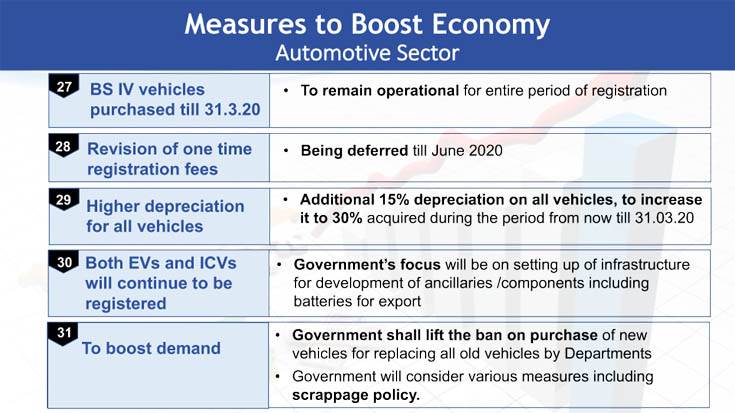 The various measures announced by the government include BS IV vehicles purchased till March 2020 to be valid for their complete period of registration. The proposed increase in one-time registration fees on vehicles has been deferred till June 2020. Further, the government has called for an additional 15 percent depreciation on all vehicles purchased till March 31, 2020, effectively making depreciation on new vehicles to 30 percent.

ICE vehicles and EVs to co-exist, scrappage policy coming
Addressing the concerns among the automakers the finance minister today clarified that the government will not ban sale of Internal Combustion Engine (ICE) vehicles, and both ICE and electric vehicles (EVs) will co-exist. She said that the government's focus is to support on setting up of infrastructure for development of ancillaries and components including batteries for export. 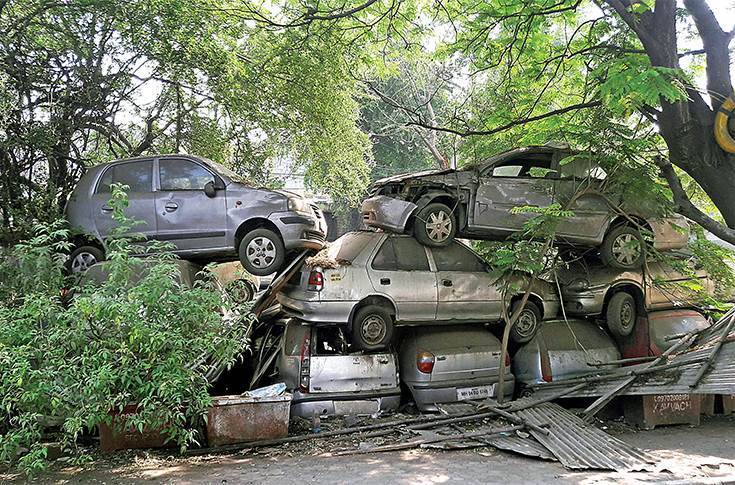 The government has also said that it will soon be rolling out the much-anticipated vehicle scrappage policy, which will motivate users to get rid of their old polluting vehicles. In addition, the centre has asked government departments to replace their old vehicle fleet, which may see some growth momentum for automakers in the country.

It may be noted that the country's central bank the Reserve Bank of India (RBI) had reduced repo rate (the rate at which the banks get loan from RBI) for the fourth time in a row, with the last revision on August 7, 2019 witnessing a unprecedented 35-basis point reduction. This may not have yet translated to auto loans getting cheaper but today the Finance Minister asked banks to pass on the rate cuts announced by RBI to customers. In fact, the finance minister said banks will soon launch loans linked to the repo-rate.

An inter-ministerial Task Force is being formed by Department of Economic Affairs to finalise the pipeline of infrastructure projects. The initiative is expected to boost growth and creation of jobs. The government says it will spend around Rs 100 lakh crore over next five years for developing modern infrastructure. This humoungous expenditure by the government on infrastructure will translate into a good portion reaching the medium and heavy commercial vehicle (M&HCV) industry, which is seen as the barometer of the economy.

SIAM welcomes FM's growth-driving measures
Apex industry body SIAM, which has been calling for a growth revival measures since long, has welcomed the steps  announced by the central government. Commenting on the measures, Rajan Wadhera, President, SIAM, said: “SIAM is thankful to the Finance Minister, Ms Nirmala Sitharaman, for addressing the difficulties of the automotive sector by announcing specific measures to boost demand. The industry highly appreciates that the FM has responded with a package of measures within two weeks of its consultation with the industry.”

“Affordability and availability of retail finance as well as finance for dealers was a major concern for the industry and the announcement today have adequately addressed concerns on both the fronts. The release of Rs 70,000 crore for PSU banks recapitalisation and Rs 20,000 crore for National Housing Bank will give banks and NBFCs enhanced liquidity in the system. Moreover, the linking of repo rate to interest rates charged for vehicle purchase would support lowering of EMIs for auto purchases, thereby boosting demand.”

“The removal of ban on purchase of vehicles by Government department and 15% higher depreciation for all types of vehicles purchased before 30th March 2020 should also give a definite boost to vehicle demand in the short term, especially vehicles meant for commercial use. The deferment in revision of one-time registration fee until June 2020 is also a very positive step as the industry was reeling under the pressure of price increases and higher registration fee would have further impacted demand negatively.”

“SIAM also welcomes the assurance that a Vehicle Scrappage Policy will be announced soon. Industry is already in the process of establishing scrapping infrastructure in various parts of the country and the announcement of such a policy will certainly give a boost to large investments in this area. The industry will keenly await the release of the detailed policy as it would remove old and polluting vehicles from the road as well as support incremental demand generation.”

“Industry is grateful for the FM’s clarification that both EVs and ICE vehicles will continue to be registered in future also. Further, the clear message by Finance Minister that BS IV vehicles that are purchased till 31 March 2020 will all remain operational for their entire period of registration has cleared the air on this subject and consumers will no longer hesitate to purchase BS IV vehicles.”

Ending his statement on an optimistic note, Wadhera said that the move to lower the vehicle transaction cost will be a very significant step and industry will await the next announcement of the Finance Minister on the GST reduction, after GST Council meeting.

Captains of industry laud measures to revive India Auto Inc
Anand Mahindra, chairman, Mahindra Group, tweeted: “I applaud the methodical approach of ‘bucketing’ key drivers of the economy & administering a healthy dose of 1st-aid to each. I’m naturally enthused that the Auto industry was recognised as a major growth generator & given a bucket of its own!"

Venu Srinivasan, Chairman, TVS Motor Company: “These measures will provide the immediate relief that the industry was seeking. The promptness of this government’s response is reassuring for not just industry, but for the common man as well because it’s putting liquidity into the market and easing the squeeze on the small and medium sector. While there are indications of a global slowdown, this government has demonstrated its resolve to mitigate the impact of that in India through these measures. This is the stability and proactiveness that industry wants.”

Dr Pawan Goenka, MD, Mahindra & Mahindra, said: Announcements today by the FM Nirmala Sitharaman are a big sentiment booster. For auto the financing woes are fully addressed, I believe. Many other indirect demand boosters. With this and “more to come”, we hope to see a good festive demand."

Guenter Butschek, CEO & MD, Tata Motors: “Tata Motors welcomes the comprehensive set of actions laid out by the government and believes measures to improve liquidity, drive growth and reduce cost of ownership of the vehicles, should help the industry get back on track. We thank the government for hearing the concerns of the industry empathetically and doing their best under current conditions."

Vikram Kasbekar, executive director - Operations (Plants) and CTO, Hero MotoCorp: “We welcome the measures announced by the Finance Minister today, to improve liquidity, increase ease of lending and transmission of rate reduction to the ultimate borrower. The announcements specific to the automotive sector provide clarity and positivity to both OEMs and customers. However, we would reiterate our request that two-wheelers, which are neither luxury nor ‘sin’ goods, require a reduction in the rate of GST from 28 to 18%. This will help boost demand immediately, leading to an even more positive impact. We hope this will be addressed in the next round of measures.”

Nagesh Basavanhalli, MD and CEO, Greaves Cotton: “The slew of measures announced by the government is a timely step and it will provide the much-needed boost to revive the automobile and allied sectors. Relaxation on usage of old BS IV vehicles, equal impetus to ICE, EV growth, bank recapitalization and passage of repo rate benefit to customers will improve the market sentiment. Time- bound credit of GST refunds and streamlining of norms will help growth. We will start seeing the positive impact on the automobile industry.”

Rahil Ansari, Head - Audi India: “We highly appreciate the approach of the government and the support with regard to the automotive industry. Now it is up to the banks and NBFCs to deliver the trust and benefit given. We are confident that the ease of access on loans to consumers will also be improved by banks. Independent of this, we have had and will continue to have strong in-house financing that customers can continuously rely on. Additionally, the clarity on BS-IV vehicles and decision to support all fuels will remove the confusion that customers are facing. We have always maintained that luxury is not a sin and are thus enthused by the government's focus on reviewing the ‘Super Rich’ tax. This should improve customer sentiment specifically in the luxury industry.”

Ashish Kale, President, FADA: "All our points of concerns and suggestions have been listened to seriously and most have been actioned by the finance minister and we welcome all the initiatives.  The liquidity easing and confidence building in the banking Industry, which was already actioned,  was followed up today by the slew of announcements of increased depreciation rate till March 2020, deferment of one-time registration fees, coupled with the soon-to-be-announce scrappage policy will definitely boost demand.

The release of Rs 70,000 crore capital to PSB' immediately and another Rs 500,000 crore in a phased manner, Linking Retail Loans to Repo Rate, providing more credit to NBFCs for auto and housing loans are all huge demand-generating steps.

Added to these, the announcement of BS IV vehicles being operational for the entire registration pPeriod is a very important snnouncement and will clear the confusion about the existing BSIV petrol and diesel vehicles.

FADA is quite confident that these measures will definitely uplift customer sentiment for the upcoming festive season and the dealer community is very positive that demand in auto sales would soon pick up."