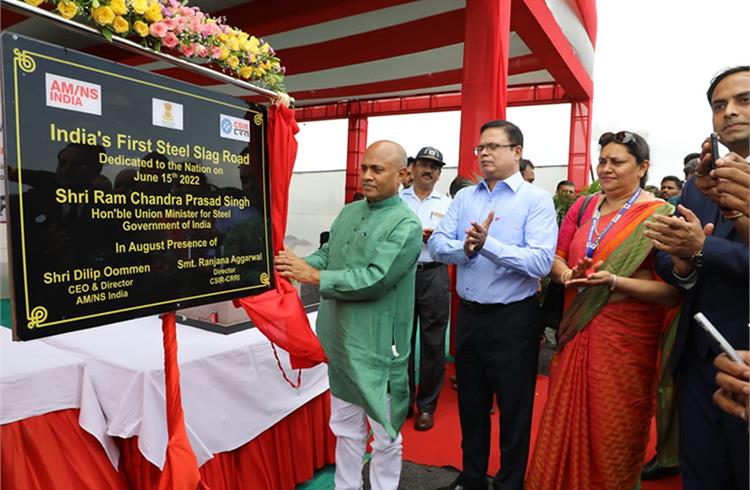 Union Steel Minister Ram Chandra Prasad Singh inaugurated the 1 km six-lane road in Surat which has been constructed using around 1 lakh tonnes of processed steel slag from ArcelorMittal Nippon Steel India’s Hazira manufacturing plant. It has been developed in collaboration with the Central Road Research Institute (CRRI) – a laboratory of the Council of Scientific and Industrial Research (CSIR).  At least 1000- 1200 heavy commercial vehicles use the road to transport goods to and from Hazira port each day, a statement released by the company informed.

Dilip Oommen, CEO, ArcelorMittal Nippon Steel India remarked, "Part of the Waste to Wealth and Clean India Campaign, the first-of-its-kind initiative not only validates our quest to contribute to a circular economy, but also sets a new benchmark for others to emulate”.

The company has already received the first order for the supply of steel slag from GR Infra Projects, which was awarded a contract by the National Highways Authority of India (NHAI) for the construction of a 36.93 km eight-lane access-controlled stretch from Ena to Kim in Surat. The stretch is a part of the upcoming Vadodara-Mumbai Expressway. The initial order is for the supply of 1 lakh tonne of steel slag. Ten trucks carrying the first consignment of 350 tonnes’ steel slag were flagged off at Hazira last week.

ArcelorMittal Nippon Steel's 9 million tonnes per annum (MTPA) integrated steel plant in Hazira generates 2 MTPA of steel slag from Electric Arc Furnaces/ Conarc Furnaces. While steel slag has long been reused for road making and construction, its quality and efficacy are neither regulated nor monitored. To address this, CRRI was awarded a national project by the Ministry of Steel, Government of India, to conduct scientific research on the uses of steel slag in road construction, with ArcelorMittal Nippon Steel opting to be an industry partner to the initiative. "The resulting processed slag has been scientifically proven to be more durable and cost-effective than natural aggregates typically used in road and highway construction. Test road patches had been made earlier in this country by partially replacing stone chips with steel slag in some layers. In contrast, the present road has been made by replacing natural aggregates in all the layers of the road; for the first time in the country, and possibly for the first time in the world" the statement adds.