With the addition of the third assembly line at its Gujarat facility, which had peaked its capacity within six months of start of operations, HMSI's total production capacity will rise to seven million units per annum. 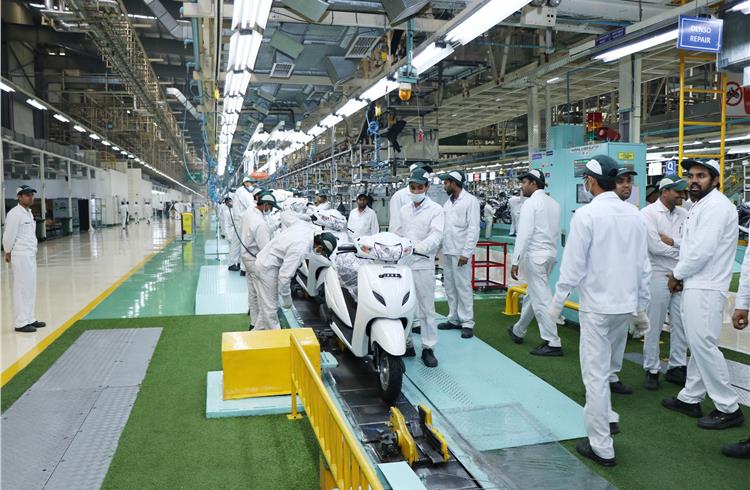 This appears to be further consolidation of India as the largest production hub for Honda’s global two-wheeler business.

The fast-paced growth has been strongly backed by the ever-growing demand for scooters, led by the Honda Activa which is the largest selling two-wheeler brand in the country for the second financial year (FY2017-18) in a row.

“Honda is planning to add third assembly line at its Gujarat plant, thereby taking this plant’s annual manufacturing capacity to 1.8 million units. While this will provide the much-needed room to the company to deal with its capacity constraints, this move will also buy time for them before they take a concrete decision on setting up their fifth manufacturing plant in India. This is a remarkable strategy as setting up a greenfield facility is a huge decision, and it requires a solid case study and evaluation reports to be presented to the top management at Honda Japan,” highlighted a source, requesting anonymity.

“The Gujarat plant has been operating at full capacity. However, the company’s evaluation has figured that it can still add one more assembly line at that site. With the third line, the Gujarat unit will become the second largest plant (after the Bangalore facility) for Honda Two Wheelers in India,” added another source aware of the development.

Meanwhile, an email sent to the company on Friday (April 6) in this regard remains unanswered.

Continuing to grapple with capacity constraints, Honda had then shifted its focus to the Narsapura plant near Bangalore where it had available land for further capacity expansion. In August 2017, Honda had inaugurated the fourth assembly line at its Narsapura site, thus boosting plant’s annual capacity to 2.4 million units. This had marked Honda’s annual capacity to be 6.4 million units.

According to the company, this had cemented India’s prominence making it the largest production hub for Honda globally.

Fast-paced demand growth in the market and Activa’s long order book had often resulted in Honda cutting down the production of other models to match the market demand. For example, the company had to adjust the production capacity between the CB Shine and Activa at its Narsapura plant in the past.

Interestingly, with annual capacity of 2.4 million units, the Narsapura plant stands as the largest manufacturing facility for Honda’s two-wheeler division.

Speaking to Autocar Professional in this regard during Auto Expo 2018 in early February, YS Guleria, senior VP (Sales and Marketing), HMSI had said, “We have been conducting several studies, which were going on internally, to re-work on the (manufacturing) efficiency without (putting up) any new greenfield (facility). We want to understand how much can we further enhance the production capacity. I think there are some positive results and we would be sharing them soon."

Although Guleria had denied the possibility of installing the third production line at the Gujarat plant, he did agree that there is some space that could be squeezed out for operational expansion. “There is no new production line possibility at the Gujarat plant as of now (February 2018). So instead of a new greenfield facility, we are looking at how much extra production capacity can we generate within our existing set up. However, we do have space at our Gujarat plant but we are evaluating the big changes happening in near future (referring to the BS VI norms)," he had stated.

On the FY2017-18 sales front, the company has laudably added more than one million incremental volumes to record total domestic sales of 57,75,243 units (up an impressive 22.23 percent YoY). This marks Honda being the largest volume gainer among all other two-wheeler players in India.

“Honda 2Wheelers India is the only two-wheeler company in the world to grow at a pace witnessed never before, adding over one million incremental customers in a single year.  With four brand-new models, new capacity infusion, addition of 500 new network outlets increasing our reach to hinterlands, Honda successfully consolidated its leadership further in scooter segment while aggressively gaining new motorcycle customers,” said Guleria, reflecting on his company’s impressive performance.

Also read:
How a scooter is born at Honda’s Gujarat plant