CV Raman who is closely associated with Maruti’s product development and R&D functions for over three decades puts things in perspective. 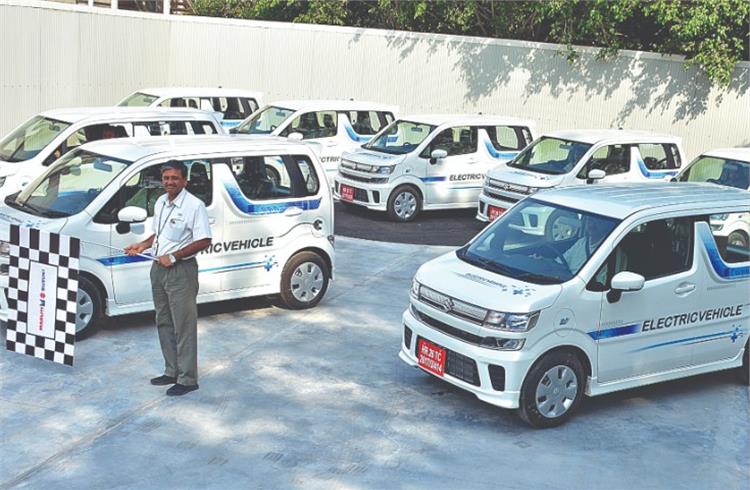 Maruti Suzuki India has not forayed into electric vehicles but as chief technology officer, CV Raman says, the company will launch the best from its stable when the time comes. The company had run a pilot with 100-150 Electric WagonRs across the length and breadth of the country on temperature, geographies, driving patterns only to conclude that more time was needed.

CV Raman who is closely associated with company’s product development and R&D functions for over three decades puts things in perspective. Raman is categorical that as a company, Maruti has “consistently delivered quality products and I don't see anything changing when it comes to EV passenger cars”.

He says there are other issue to be considered from an EV buyer’s perspective. From Maruti’s perspective, Raman says the EV customer should be able to charge an e-car at home and when travelling, there’s a need for additional charging. The main challenge, he says is enabling home charging. The fact is that over 60 per cent vehicles are parked on the road.

“The access to charging infrastructure is improving, but is still a challenge. We need to provide a simple solution like charging a mobile phone and even for fast charging we need a minimum 15-20 minutes,” he says.

From an organisational perspective, Raman says that foraying into EV will involve bringing about infrastructure changes at all its dealerships, and at the factory. “People have to be trained to use high voltage applications in the four wheelers. Safety and training people are the key issues on which a lot of work is required to be done,” he added.

At this point, the conversation turns to recent fire incidents which involved two-wheelers, and Raman is clear that the technology development is a journey, and Indian EVs need to do their Plan-Do-Check- Act (PDCA) more rigorously to improve, avoid thermal incidents and recall.

Let's take a leaf out of their (two-wheelers) books, Raman says, referring to the recent fires. He also says there were issues around CNG when introduced but Maruti has developed both the ICE & CNG engines in such a way that “you hardly hear any recall or any incidents to speak of”.

Companies entering the EV space need to understand how the customer is using and charging the product and how the product behave when it’s charged at 45 degrees ambient temperature.

Raman also says that there is a need to work on hybrids. While electrification is a process and there is a need to improve fuel efficiency given the high fuel prices and also to reduce CO2,” we need to have a full portfolio of vehicles from the lower end to the higher end”. “We have to give technology that will be relevant to every segment that we address and touch the consumer's life in a very unique manner," he reiterates. On other green initiatives, Raman says Maruti Suzuki is committed to the country’s flex fuel vehicles and will develop models that are e20 compliant.

Speaking about the role of engineering and its interface with marketing, Raman’s view is that the Indian car market is consistently evolving and role of any engineering head is to work with the marketing teams and market research to understand the customers’ needs and aspirations are. Finding the suitable technology and making it a valuable proposition within that price point is key to gaining acceptability.

On technology in cars, Raman says it is not necessary that technology has to be introduced at the top-end first it can be bottom up instead. The AGS for instance, was first introduced by Maruti Suzuki in India in the 1st Generation Celerio in 2014.

“We have been able to capture the learnings over the last seven years of deployment and this has enabled us to upgrade it now in new Baleno, S-Presso, Swift, Baleno, Dzire, Wagon R and the Ignis. In the metros, the overall driving speeds have come down. With customers having to frequently shift gears at multiple times, the paddle shift technology that made its debut in the Baleno followed by the XL6 is now also incorporated in the Eritga. On the engines front, Raman says, we have made significant changes from KB series to KC series by updating smart hybrid technology that you see in the XL 6. “If you look at all our models, we have very unique design cues that have been added giving each product a unique aspirational fee,“ he said.

On Suzuki and Toyota’s alliance, Raman says R&D teams are working at a global level in various technologies. “You will see technology and many other things that will be coming out from this partnership. With time, the market will understand our philosophy and the products we roll out from this alliance will be maintained and catered to by our dealerships.