Dr Andy Palmer: ‘EVs not the sole option for a net zero future.'

Popularly known as the grandfather of EVs for his role in developing the Nissan Leaf, Switch Mobility’s vice-chairman and former boss of Aston Martin delivered the keynote address at the EV Forum. 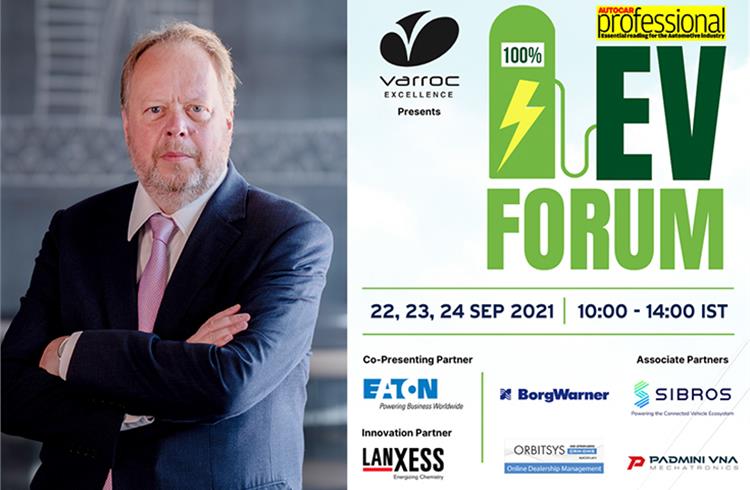 Day two of Autocar Professional’s EV Forum opened on a new chargre. Delivering the keynote address was none other than Dr Andy Palmer, who is often referred to as the ‘grandfather of electric vehicles’, given that he played a central role in developing what is believed to be the first ‘proper’ EV – the Nissan Leaf – in 2010. As chief operating officer at the time, he led Nissan’s foray into the world of EVs with the mass-produced Leaf and also rolled out the eNV200 commercial vehicle.

A true-blue engineer, he has been in the automotive industry for over 40 years now, having begun as an apprentice at a clutch and brake manufacturer in the UK as a teenager. Around 35-odd years later, he was Aston Martin’s boss for close to five years, laying the groundwork for an electrified future, and more recently took charge as CEO of Ashok Leyland’s EV arm – Switch Mobility – in June 2021.

Dr Palmer began his speech by referring to Andy Warhol’s famous ‘They always say time changes things, but you actually have to change them yourself’ mantra. He says “this is a perfect reflection of the automotive industry we work in today. In fact, it could very much be argued that right now is the most exciting period in the industry since the horse gave way to the cart. The move our industry is making towards carbon neutrality is one of such magnitude that we are, for the first time in many decades, seeing new players enter the field and new expectations being set by consumers. Whilst from the outside, it may look like some of that change is being driven by external factors, such as governments, I’d argue that actually a lot of that change is, as Andy Warhol suggests, being driven by ourselves as an industry.”

Dr Palmer, who has recently been appointed an ambassador for the COP26 Business Climate Leaders campaign, says he is “committed to dedicating this next phase of my career to developing the next era of net zero carbon transport.”

The times they are a-changin
From the rollout of the Nissan Leaf to today’s EVs, Dr Palmer says there has been massive change. The Leaf used the first generation of advanced batteries with lithium manganese oxide. Today, the green Nissan uses nickel manganese cobalt, a much more efficient and effective battery that both lasts longer, as well as charges faster.

EV OEMs have reason for cheer says Dr Palmer. “The cost of batteries nowadays is reducing significantly, at the same time as efficiency is improving. For governments looking towards shifting from fossil fuels to electric power, this cannot come soon enough. For many governments around the world, the approach seems to be to move away from subsidies and towards legislation to encourage an electric revolution. At least nine countries, including the UK, France, Mexico and Spain have pledged to phase out internal combustion engine vehicles.”

“The biggest challenge for the Nissan Leaf 15 years ago was pretty similar to what we see now – access to battery. Battery tech is still relatively nascent. We are on a journey towards solid state battery but there is still a long way to go. BEVs are expensive, so cost parity and affordability are matters to watch for. Access to sustainable energy and EV charging network are another key challenge.

He adds, “This is all well and good – as long as these governments know where they want to get to. Politicians around the world need to ask themselves some fundamental questions. Are we trying to reduce carbon dioxide emissions? Or are we chasing cleaner air? If the former is what we’re looking to achieve, then we should be focusing a little more energy on hot hydrogen, fuel cells and synthetic fuels. While synthetic fuels burn carbon, CO2 is actually captured in the manufacturing process, thereby resulting to synthetic fuels becoming “net zero”. If it’s clean air that we’re chasing, then EVs are the obvious solution as tailpipe emissions get eradicated once and for all, despite the legitimate concerns around how materials for batteries are mined and manufactured. However, it might also be the case that those in power both want to capture CO2, as well as tackle cleaner air. If this is the case, then what we must do is pay for the premium, given that the only viable option today in this regard is to look at fuel cells from a clean hydrogen source: with clean hydrogen sources being very, very scarce. It won’t be easy, but many countries, not least India, has the talent and brains within its research and academic institutions to get us close to making this more of a reality.

Dr Palmer lauded India’s recently announced Productivity Linked Incentive (PLI) scheme. “I am delighted to see the recent announcement in India on its PLI scheme. We are studying what it might mean to us and the EV industry in India, but we are encouraged by it.”

Engineers are the solution, not politicians
Dr Palmer, a hardcore engineer, maintained his avowed position on engineers driving the automotive world compared to governments and politicians calling the shots on industry. He said, “I want to address several governments around the world who plan to phase out internal combustion engines over the coming years. This is going to have a big and significant impact on the auto industry as know it. What our political masters must do now is encourage competitiveness, so much so that engineers will battle it out in developing new technologies that enable us to get there. If the petrol/diesel-powered combustion engines are a thing of the past, then the government must not prescribe what it believes to be the replacement technology – because it will end in tears. Politicians should define the problem and let the engineers come up with the solution.”

However, Dr Palmer points out that EVs are not the silver bullet. “I am an idealist but also very much a realist. And that’s why I urge caution when it comes to viewing electric cars as the only option for our net zero future, because EVs might not be the best way to get to where we want to get.”

“Hydrogen could very well outperform electric batteries when it comes to efficiency as regards heavy goods vehicles and long-haul buses. Synthetic fuels on the other hand might keep on quelling car enthusiasts’ pleasure just a while longer by providing the noise and excitement that makesports cars the excitable beasts that they truly are.There is no doubt that contemporary scientists are working on improving the cleanliness of synthetic fuels at this point in time. True – we’re not there yet – but we all know how science works. In five years’ time, we will achieve what we thought was impossible 10 years ago. The rapid development of the Covid-19 vaccine is the case in point.”

He urged that industry should diversify its strategy. “As an industry, we should have a Plan A, Plan B and C. It is only by doing this that we can have a plan that is truly resilient to changing circumstances.”

“The decisions we take over the coming years will define the next era of human advancement. Getting the economics of batteries and other net zero fuels right, is not something that we can do, but something that we must do. However, doing is far from certain to happen seamlessly, given the global challenges of the modern world.

“Today, I truly believe we find ourselves in the fourth iteration of the industrial revolution – a revolution that started through steam power. We would do well to keep in mind that the fifth iteration might very well be powered by our ability to identify and develop net zero modes of transport. Getting there, however, is not a natural process. Just as we had to push our boundaries in the past, so too will we have to push our boundaries in the present and in the future. Changing the world takes sweat and hard work. The (EV) revolution is already underway. Let’s keep it going,” he said on an optimistic note.

Dr Palmer concluded his address by saying, "Like the shift from the horse to the cart, I truly believe the shift from internal combustion to electric mobility is equally seismic.”