Diego Graffi: 'India has the potential to lead the global charge in EVs.'

Piaggio Vehicles’ CMD calls upon industry to enhance localisation of components for EVs, which will lead to reduced vehicle costs. 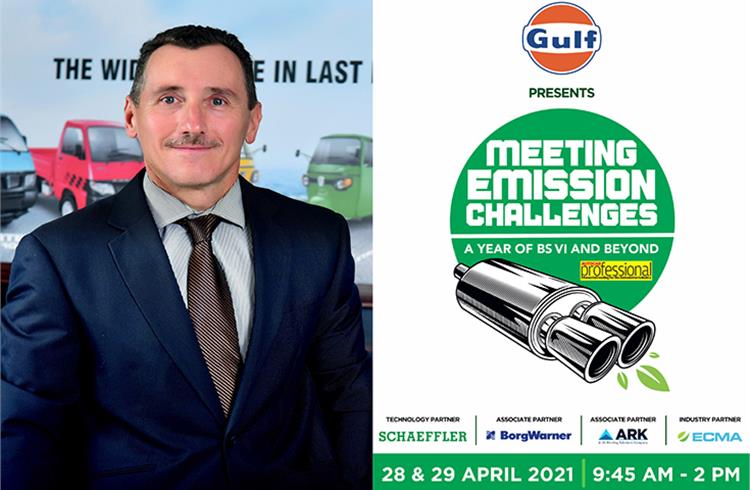 It took a scant three years for the Indian automotive industry to make the technological transition from BS IV emission norms to BS VI. While this laudable feat is recognised as one of the quickest migrations ever, there were also a number of heartburning issues companies could have done without.

Speaking at the mega-webinar on ‘Meeting Emission Challenges’, Diego Graffi, CMD, Piaggio Vehicles, said: “It was a big challenge when we moved from BS III to BS IV. With a relevant increase of cost, we could absorb costs fully without making it difficult for our customers. However, once we reached that level, we had to start working for BS VI and the timeline was very less. It was a far bigger challenge in terms of technical and technological capability.”

He added, “It was nearly impossible to meet the norms without electronic fuel injection. Many investments were also made accordingly. Another bigger challenge was in terms of price as it increased 20-25%. This will be tough on customers. So, a proper roadmap and deadline would help.”

E-mobility in India
Commenting on the EV megatrend, the Piaggio Vehicles boss remarked that the path to zero emissions is with electric vehicles. However, OEMs have to aggressively look at a feasible and economical solution for cost-conscious consumers in a market like India. He is of the opinion that OEMs need to given ample time to reabsorb the massive investments made on BS VI and judiciously plan the way ahead.

With the push for EVs in India, Diego pointed out that India has the potential to lead the global charge in this vehicle category. “Going forward, with the push coming from the Indian government to electric transition will give a boost. This will allow India to have indigenising components. It will give a fillip to demand for vehicles made in India. EVs will have a faster acceleration in the next 4-6 years and India has the opportunity to lead the world. This will happen when the industry moves fast towards localisation,” he said.

He concluded by saying that industry has to distinguish as to what it wants and what is required. “Consumers want engines that are efficient, deliver mileage and low NVH. We have to find the right compromise between performance, mileage, efficiencies and low emissions. I see a tendency for OEMs to adopt a certain technology. Any regulation that wants to address consumer needs and emissions, needs to be technology agnostic. It is in OEM interest to deliver the best product to the customer and meet his/her needs," he signed off.