Even as CY2022 is set to be a record year with overall sales of around 3.8 million passenger vehicles, the last month of the year is also billed to be a record-breaker with best-ever monthly retails. 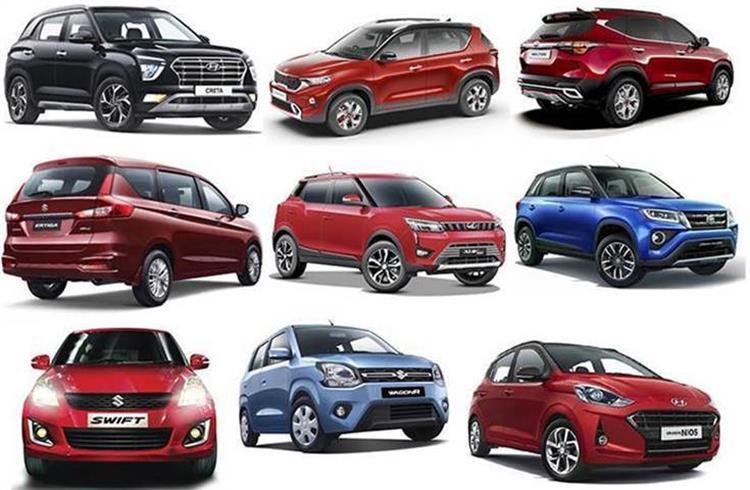 This month is going to be a ‘Delightful December’ for passenger vehicle manufacturers in India. As many as 390,000 to 400,000 vehicles may be retailed in a single month for the first time ever in the history of the Indian automobile industry. If the industry achieves this, it will easily surpass the previous high of 382,000-unit retails in December 2018.

These record deliveries are likely to happen at a time when the industry was fearing a slowdown in sales following a bumper 42-day festive season. However, what have acted as sales catalysts are rising incentives to buyers, improved supplies and also the fear of significant price increases ahead of BS VI Phase 2 emission norms in April 2023, which includes new RDE (Real Driving Emission) norms and OBD (onboard diagnostics).

It is this combination of factors that has  helped automakers deliver more cars than they ever did before, satiating the mobility needs for lakhs of people who have been eagerly waiting for delivery for months now.

Calendar year 2022, which started on a high note with 252,466 units in January, is set to close by scaling a new peak, breaking many records along the way for car makers in the country. And this performance comes on the back of PV sales accelerating past the 300,000-unit sales mark for for five months this year (see retail sales data table below).

With sales of an estimated 40,000-odd units in December, the auto retail industry would generate a turnover of over $5 billion or Rs 41,235 crore in a single month, facilitating a minimum of over Rs 10,000 crore to Rs 12,000 crore of GST collection for the government. 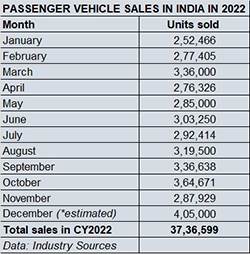 CY2022 to set a new benchmark for PV sales
Given the strong and sustained momentum, the Indian passenger vehicle market is set to close the calendar year with a record 3.7 million units in retail sales, which constitutes YoY growth of 19% (CY2021: over 3.1 million units). On an average, carmakers delivered over 300,000 cars in a month, which is approximately 40,000 units per month higher than in 2021.

Shashank Srivastava, Senior Executive Director, Sales and Marketing, Maruti Suzuki India, says there was a significant vehicle order backlog in the industry but as production got ramped up, it helped in delivering more vehicles.

"The pent-up demand is being satiated. With wholesales exceeding retail for the most part of the year, this obviously helped in inventory build-up which meant better availability for December retails. The fear of price hikes also triggered some amount of pre-buying. With dealers and carmakers wanting to have the lowest possible vehicle stock of 2022, a very healthy business has been done so far," added Srivastava.

High discounts drive demand
Industry players say the strong traction is also on account of four-year-high discounts as most carmakers are keen to liquidate their non-RDE stock and transition to new vehicles that conform to the upcoming emission regulation in April 2023.

According to Manish Raj Singhania, president of Federation of Automotive Dealers Association, the offtake has been very healthy in December and the numbers should surpass the pre-Covid levels of 2019-20 easily and will also be higher than the previous year. "The discounts have helped in retails during the month and the stock at dealerships is also reducing, which augurs well for the coming year to start on a good note,” added Singhania.

Meanwhile, vehicle deliveries have been healthy and the sizeable discounts have also ensured there was a higher share of hatchbacks and sedans delivered in December. The preference and demand, however, continues to remain skewed in favour of SUVs, a trend which is set to continue well into 2023.

As regards the near-term PV industry perspective, with pending bookings continuing to remain between 500,000 to 600,000 units and dealership inventory too reducing to less than two weeks, vehicle despatches are likely to remain healthy in the coming months.

Maruti Suzuki’s Srivastava is of the opinion that in the next quarter, the discount levels are bound to come down and the demand momentum will be purely based on economic fundamentals.

Gaurav Vangaal, associate director, S&P Global Mobility, says India’s economic growth has ensured that the inflationary pressures have been absorbed thus far. Opening up of oil supplies from Russia ensured that fuel prices remained stable and did not impact the cost of ownership.

“India was the fastest growing market in the world amongst the top 10 markets globally and it is expected to continue to grow. The increased prices on account of RDE norms and the upcoming safety norms will further put pressure on the entry level, but one expects the SUV sales to continue to grow, provided the GDP growth does not slow down significantly,” added Vangaal.