While the goods M&HCV market is already approaching FY2019 levels, demand for small trucks is yet to achieve strong gains, indicating that the current CV upcycle has yet to reach its peak. 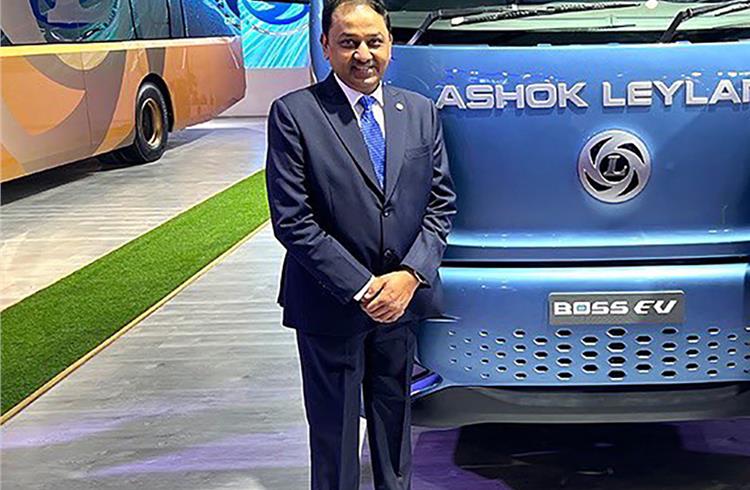 The upcycle in demand for commercial vehicles (CV) is far from over and may continue for another 2-3 years, believes Shenu Agarwal, MD and CEO of Ashok Leyland, a flagship company of Hinduja Group.

Speaking to Autocar Professional on the sidelines of the ongoing Auto Expo 2023, Agarwal remarked, "I think for the next couple of years, irrespective of the global situation, India will continue to grow." That is quite clear now. "There was some concern earlier about whether India would follow global trends. "However, the last 2-3 quarters have clearly demonstrated that India can chart its own path," he added. Even, if history is any indication, then the cyclicity may last for another 2-3 years, he continued.

The upward trajectory of the CV segment, driven by a strong push in infrastructure development, a pick up in private capital expenditures, rising mining and related industries, as well as a sizable increase in replacement demand, should be taken into account when analysing Agarwal's optimism.  Although the goods M&HCV market has already moved closer to FY2019 levels, small truckers have yet to drive new truck demand, suggesting that the current CV upcycle has yet to reach its peak.

Agarwal, who became the company's MD and CEO in December 2022, went on to say that with demand increasing, Ashok Leyland’s business has been able to reclaim market share in most of the segments in which it competes. In order to provide context, it should be noted that Ashok Leyland's market share, particularly in the medium and heavy commercial vehicle (M&HCV) category, has now risen to above 32% from slightly under 25% just over a year ago. The company also quickly recovered in the bus market, almost following the same growth trajectory as the rest of the sector.

Despite the volume spike, Agarwal does not feel the need for additional capacity expansion at present. Dr N Saravanan, Chief Technology Officer, Ashok Leyland, " We may invest for new technologies but not necessarily the capacity expansion".

Commenting about export markets, Agarwal said that because Ashok Leyland primarily exports its vehicles to the GCC and SAARC, the geo-political climate in these regions is having a detrimental effect on its volume, though it has so far been offset by supplying to other nations.

Speaking about the effect of inflationary pressures on the company's profitability, Agarwal added that because commodity prices have been somewhat stable over the past few quarters, the management expected the situation to last for another two to three quarters. However, since the past week or so, the news of rising steel prices has again kept them up at night, he said before signing off.