The company’s leadership has identified passenger cars, two-wheelers, off-highway trucks (OHT) and exports as strategic areas with higher margins, and which will help reduce  the company’s dependence on the truck segment. 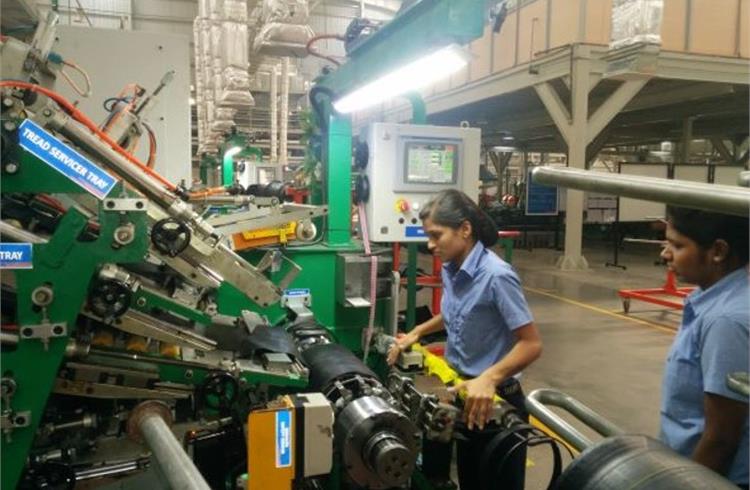 Having scaled down its capex plans for this fiscal, CEAT is rejigging its focus to  high-margin products in domestic and overseas markets.

The company’s leadership has identified passenger cars, two-wheelers, off-highway trucks (OHT) and exports as strategic areas with higher margins, and which will help reduce  the company’s dependence on the truck segment.

These numbers provide some perspective as revenue contribution from the focus areas is said to have spiked to nearly 57 percent during fiscal 2021 from about 20 percent in FY2020. With renewed focus, the company expects it to reach about 60-65 percent in 4-5 years' time. According to Anant Goenka, CEAT’s managing director, with the shift in focus to certain categories, it needs to allocate capital for investments. As the Indian economy recovers from Omicron, the vehicle scrappage policy and geo-political issues such as the China plus one policy and anti-dumping duties on Chinese tyres adopted by the US and European countries  have helped spur demand for Indian tyre makers.

CEAT has, therefore, reduced its capex plan to about Rs 800 crore for FY2022 from  Rs 1,000 crore envisaged earlier. For fiscal 2023, the company hopes to invest Rs 700 crore. While phase-1 of the truck and bus radial tyres (TBR)  expansion plan involving around Rs 700-750 crore capex  has been deferred by a year, phase-2 which would have seen capex of about Rs 500 crore has been deferred indefinitely. This segment in which Ceat has a 7 percent marketshare is seeing  intense pricing pressure as a result of a slowdown in the replacement market in recent months due to rising competition and commodity prices

These developments comes at the tail end of a Rs 3500 crore capex for greenfield expansion plans  which the company initiated in the last 2-3 years as part of its expansion plans.  Anticipating strong demand for radial tyres, Ceat had in early 2021  announced a 163-acre greenfield project in Kanchipuram, near Chennai with the  capacity to produce up to 96 lakh passenger car radials annually on completion of all phases. As a result, CEAT has sufficient capacity to meet demand for next couple of years. In the domestic market, this facility will cater to brands such as Hyundai and Nissan-Renault. Export customers include OEMs in South Asia, Europe and North America.

In Goenka’s view, India has over past few years  established  a very good brand equity for itself in the US and European market, particularly in the OHT segment by offering high-quality tyres at affordable prices. The company now hopes to capitalize on the advantage  by increasing its footprint in the EU's passenger car segment. In addition to it, CEAT is in preparatory mode to launch truck radials in the EU market in about 4-6 months.  In a year’s time, it hopes to look at the US markets for passenger cars radials too. "As a result of low cost and high-quality margins, we are able to supply at competitive prices" noted Goenka. The company now hopes to up export revenues share to 25 percent from 18-20 percent currently.

In the OHT segment, CEAT’s existing capacities remain fully utilized at about 50 tonnes per day. The aim now is to take it up to 80 tonnes by July/August before scaling up to 105 tonnes per day, the investment for which it has not yet begun though Goenka expects it to happen within a course of next 15 months, thereby hoping to increase the OHT revenue mix to 10 percent  from 5 percent at present.

On current demand trends, Goenka continued that the  truck radial segment has been witnessing a steady demand since past  6-9 months and is expected to grow further in coming months on back of a low base of previous few years. Key factors for this include GST which  reduced the inherent waiting time for the trucks at toll collection centers across the country thereby increasing their efficiency. In addition to it, truck load norms introduced in 2018 further resulted in about 15 percent operational efficiency of trucks, thereby impacting the demand for new trucks further. However, the vehicle scrappage policy announced last August, will motivate transporters to buy new ones which will boost demand in the segment, says Goenka.

In his view, "Now things are getting back on track and the new scrappage policy coming in people are not extending second hand truck market. They are going for new ones which is creating buoyancy in truck radial segment," says Goenka.

Goenka says his company has not aimed to dominate in truck radials, though the segment is important from the perspective of covering fixed cost.  Also, it helps to reach out to OEMs and  dealerships with complete range of products. However, going forward, Ceat will be increasingly  looking to manage truck radials from point of view of profits. Its  market share in the TBR segment  is currently  8-9 percent which may now see some dip with the new focus areas in place. In addition, with demand for bias truck tyres -- an older generation tyres dwindling – Ceat is considering shifting the segment's plant capacities for other tyres or may even close the plant if required.

Talking about the company's efforts to remain a market leader in the EV segment, Goenka revealed that CEAT is working on developing different types of tyres for the EV, few of which have already been launched. He pointed out that an EV-related tyre should have features such as lower noise levels, better rolling resistance so as provide sustainability, lighter weight and superior toque performance. CEAT works with close to 80 percent of  OEMs dealing in EV out of which the company's market share stands at over 60 percent.

On the R&D front, Goenka says CEAT is constantly looking to incrementally replace use of  carbon black with silica. Derived from crude, carbon black is one of the main raw materials in the manufacturing process and is used as a filler in rubber products, constituting 25 percent  of product weight. Goenka emphasizes that his company collaborates with leading Indian and global research institutes, and researchers for continuous development of newer technologies, though R&D largely remains in-house.

While commodity prices for OEMs have been indexed, as per industry practice, the challenge is now in the replacement market where the rising  competition and inflation has made it  difficult for the tyre manufacturers to pass on the price hike. The tyre industry saw an over 40 percent spike in raw material costs over past about a year. While natural rubber prices rose by around 35 percent, crude which is an important constituent for tyre manufacturing rose by 55 percent during the same time. In domestic replacement segment, there is clear lag of about 4-5 months, Goenka said.

However, CEAT's focus on international markets has provided some solace in this context as rubber prices globally has increased at a much higher rate than domestic prices which has made passing on price hike relatively much easier. This combined with lower labour and manufacturing costs has enabled companies like CEAT to offer products at competitive rates as well as keep margins relatively on a  higher side. "We expect inflation to stabilize and hope to take a few percentage price increase in  3-5 months time,” Goenka said.

In January, ICRA, a ratings agency maintained its domestic volume demand growth for tyre industry 13-15 percent for FY2022 and 7-9 percent for fiscal years 2022-2025. Following two years of contraction, down by 9 percent during FY2020-2021 due to the impact of the pandemic and the overall economic slowdown, demand has sharply recovered in FY2022. The impact of the pandemic on tyre demand has been relatively less in comparison to other auto components which is due to higher skew (around 60 percent) on the aftermarket segment, says ICRA.

CEAT has over 4,500 dealers apart from 500 plus exclusive franchisees. In FY 21, it produced over 37 million tyres, wherein replacement, OEM and international business segments accounted for 65 percent, 21 percent  and 14 percent  of the revenues, respectively. At present two and three wheelers form around 29 percent of revenues while passenger cars, trucks/buses, farm, light commercial vehicle (LCV), and specialty vehicle (including farm, mining & earthmover, industrial, construction equipment etc.,) form 17 percent, 30 percent, 11 percent, 8 percent and 4 percent respectively. In terms of returns to investment, CEAT’s revenues remain in the range of 1:1-1.25 depending on the segment and categories. For instance, while it may be close to 1:1 or 1:1.1 for passenger cars, it gets a bit higher for TBR touching 1: 1.25 levels.