Half of the KTMs manufactured in India are exported globally to mature markets; showcases Bajaj Auto’s prowess as a global manufacturing hub for motorcycles across categories. 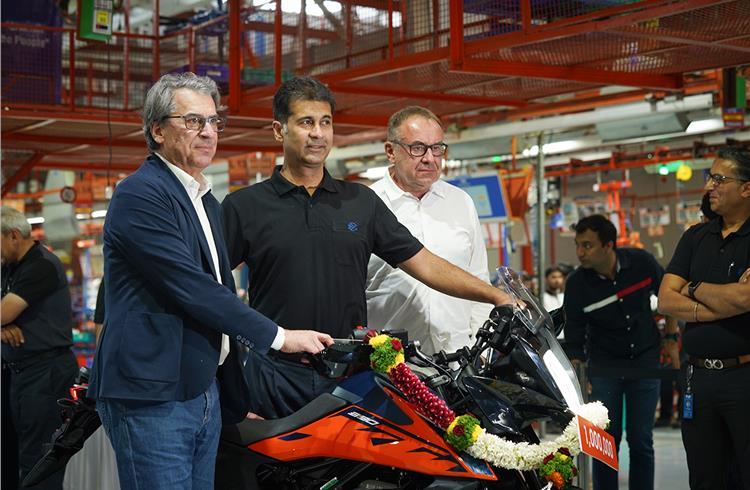 With this production milestone, KTM and Bajaj Auto’s successful partnership have set a global benchmark for collaboration. KTM has taken less than half the time to hit the second half-million milestone than the first, indicating strong growth in the brand’s adoption.

The achievement also showcases Bajaj Auto’s prowess as a global manufacturing hub for motorcycles across categories. Bajaj Auto’s Chakan plant has emerged as a key centre for exports in the country, given that half the KTMs were shipped to mature markets worldwide.

Bajaj Auto and KTM’s partnership dates back to 2007 when the Indian OEM acquired a 14.5% stake in the Austrian marque, subsequently increasing it to 49.9% in KTM’s parent company Pierer AG.

At present, Bajaj Auto co-develops and manufactures a range of motorcycles spanning KTM (125cc to 390cc) and Husqvarna (125cc to 401cc) brands. Many of the models that are produced at the Chakan plant have cutting-edge technology like Motorcycle Traction Control, Cornering ABS, Supermoto ABS, Quickshifter+, and TFT displays which have been firsts in the segment. These introductions have also led to an upgrade in the technology landscape of Indian motorcycles as well as the vendor ecosystem.

Pierer Mobility AG (the parent company of KTM) has built a motorcycling culture and established its brands through partnerships worldwide. Brands like KTM, Husqvarna, GasGas and MV Augusta are known worldwide for their high-performance features and sharp positioning.

Rajiv Bajaj, MD and CEO, Bajaj Auto, said, “Motorcycles are our strength, and the one-millionth KTM milestone is a testimony to that. When we inked our partnership in 2007, it was with the goal of affordable innovation that would reach KTM’s marquee brands to all parts of the globe. Fifteen years later, we have not only been successful but have also become strategic partners with a restructured ownership. Given our similar cultures, a sustainable and trusted cooperation has been built that will soon extend to electric vehicles and next-gen technologies. One million has been achieved. There are many more to go!”

Talking about the development, Stefan Pierer, CEO, Pierer Mobility AG, said, “This is indeed a momentous occasion for both KTM and Bajaj Auto.  At Pierer Mobility AG, we abide by our four pillars of success. These include operating as a global entity, innovating continuously, getting the right talent, and building distinct brands worldwide. Our position as a global mobility group is built on the right partners who are passionate about delivering excellence. Our constant drive to innovate and the ability to build strong brands across markets have found resonance with Bajaj Auto. Our success in this partnership gives us great confidence about the future, where we will expand our portfolio into electric and maintain our position as leaders in the powered two-wheeler industry."

KTM and Bajaj Auto plan to explore common themes, including zero-emission exhaust systems and light electric vehicles for urban environments, with an open approach to various battery solutions. The companies also have plans to develop a common 48-volt electric two-wheeler platform for serial production in India and are working on taking the Chetak EV platform to Europe.