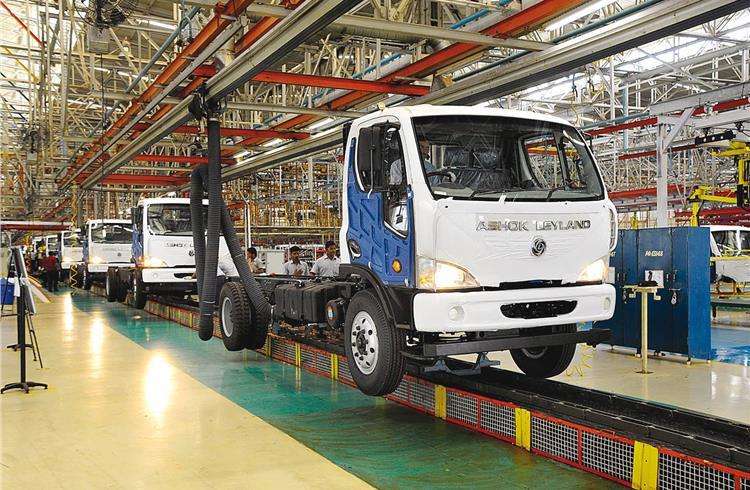 Commercial vehicle major Ashok Leyland closed FY2018 with revenue of Rs 26,248 crore (30 percent growth) and net profit of Rs 1,563 crore (28 percent growth). Both are record highs. The company reported a 10.4 percent EBITDA margin for the year and says it has increased market share across all segments.

Compared to domestic M&HCV industry volume, which grew by 12 percent in FY2018 to 340,313 units, Ashok Leyland sales grew at 14 percent to 116,534 units in the domestic market. Exports recorded a 36 percent growth and its aftermarket business also saw a healthy growth of 26 percent.

During the January-March 2018 quarter, Ashok Leyland's revenue increased by 32 percent to Rs 8,772 crore, from Rs 6,654 crore during the same period last year. Profit before exceptional item and tax during the quarter increased by 52 percent to Rs 930 crore. Total sales, including exports, during the period stood at 44,425 units. LCV sales volume jumped 59 percent to 14,309 units.

During FY2018, Ashok Leyland launched 17 products across segments, and sold 101,905 M&HCVs and 43,441 LCVs. It won 12 defence tenders, and also launched the first electric bus during the year.

“FY2018 has been an extremely satisfactory year for us with achievements in many fronts. Exports have witnessed a healthy jump in the current year; we will continue to focus on growing international business as well as defence and aftermarket portfolios. Our network continues to grow and reach out to more of our customers,” said Vinod Dasari, MD, Ashok Leyland.

“We have posted record revenues with record profits and as at the end of the year, we are cash positive with nearly Rs 3,000 crore surplus. Our focus on working capital and operational efficiency will continue. Our credit rating has been upgraded to ‘AA+’ after a span of 20 years,” said Gopal Mahadevan, CFO, Ashok Leyland.

Also read: What it takes to be a Deming Prize winner . . . twice