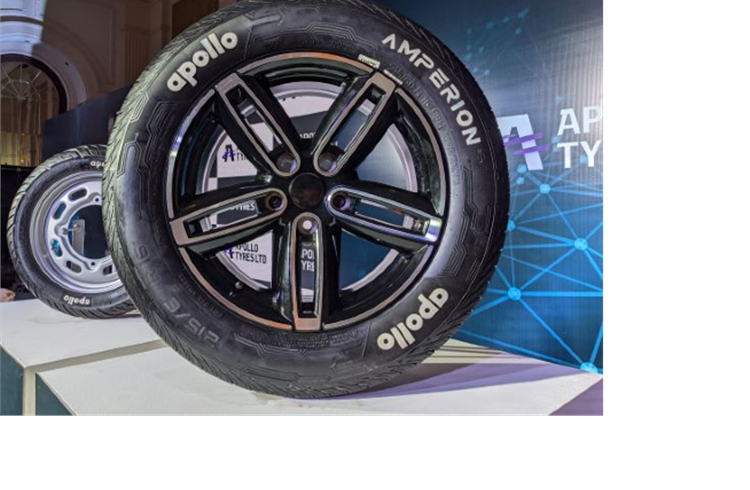 On August 1, Apollo Tyres introduced a new range of EV-specific tyres in India for both electric two- and four-wheelers, under the WAV and Amperion brands, respectively.

The company claims that these products offer an 8 percent improvement in driving range on a single charge of the EV battery, owing to the reduced drag coefficient and rolling resistance, enabled by the use of low hysteresis compound in the construction of these tyres.

The Amperion range, which, for instance, is available in 195mm and 215mm tread sizes, in both R16 and R17 rim profiles, utilises high traction, full-silica rubber for its tread compound. The high traction requirement in EVs arises from the fact that they generate instant torque as the driving motor spins at the full revolution right from the get go.

The tread pattern on the passenger-car-centric Amperion, too is stiffer compared to a regular tyre from Apollo's ICE range, and also has a larger footprint with multiple pitch sequences to achieve the desired requirements of low-rolling resistance, high traction and low noise. Apollo Tyres says the Amperion range runs quieter by up to 2 decibles than their similar-sized peers from the company's ICE range.

The sidewall and shoulder areas are also uniquely designed with a recessed approach to lower the aerodynamic drag forces. The sidewall is also made up of low hysteresis compound to reduce the rolling resistance and positively impact the car's battery range.

According to Hitesh Joshi, head, R&D, Apollo Tyres, "The Amperion range is designed in a way that it is robust enough with its two-ply sidewall to withstand Indian road conditions."

"Moreover, a design mood board philosophy was adopted during the conceptualisation of the new EV-specific tyres, and the process involved samples and images of objects used as an inspiration for product design to visualise their intended purpose," he added.

The company, which has received an NABL accreditation for conducting outdoor testing for wet grip and coast-by noise on tyres for the upcoming star labelling, has been leveraging the facilities at GARC (Chennai) and NATRAX (Indore). It has also invested into state-of-the-art testing equipment, including a tractiom trailor, semi-anechoic chamber, as well as steering robots at these test tracks.