The asphalt plant will enable the Indian company to use up to 60 percent of recyclable raw materials for its construction projects. 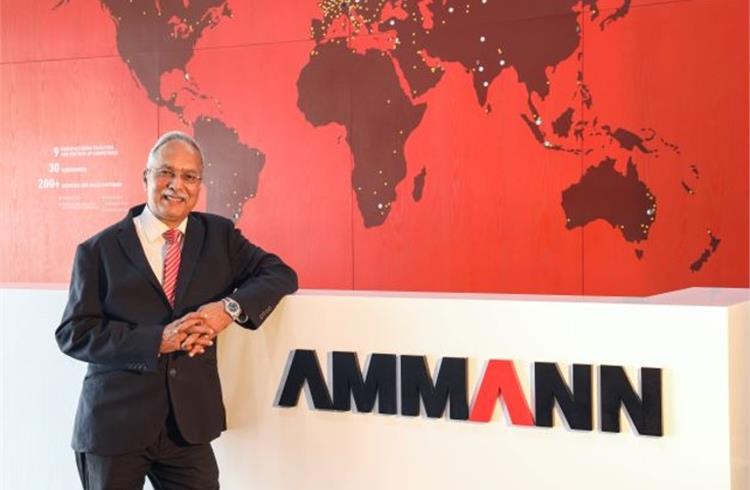 Switzerland-based  Ammann Group, a global supplier of mixing plants, machines and services to the construction industry recently initiated the sale of its first recycled asphalt plant to GR Infraprojects.

The asphalt plant will enable the Indian company to use up to 60 percent of recyclable raw materials for its construction projects.

Anand Sundaresan, managing director of  Ammann (India) told Autocar Professional on the side lines of last month's Excon 2021 that, " It is under commissioning and will start functioning  shortly.” G R Infraprojects is an integrated road engineering, procurement and construction (EPC) company which is largely focused on the road sector.

The significance of the development is that with increasing focus on the use of eco-friendly construction materials, Ammann Group has been offering its plants to global construction majors. "We have the technology where you can go even up to 100 percent of the recycled materials that can be used," said Sundaresan.

However, in India, the demand for recyclability has just been able to reach 60 percent so far. It is, however, expected to go up with more companies beginning to monitor their carbon footprints. Currently, a majority of the asphalt plants in India normally have recyclable limits ranging from 15-30 percent

The company’s total order inflow in fiscal 2022 stood at Rs 9,924 crore and is likely to cross Rs 15,000 crore in the current fiscal. Though the company remains sharply focussed on road projects, it has begun increasingly diversifying into other sectors such as railways and power transmission to augment revenues, and also to de-risk its current business model.

According to the Ammann Group website, the company's RAH100 dryer can produce mix from up to 100 percent reclaimed asphalt pavement (RAP). The RAH60 is a parallel flow dryer where up to 60 percent  hot recycled materials can be used. The RAH50 on other hand is a middle-ring dryer that incorporates up to 40 percent  recycled materials. Interestingly, recycling can also occur at asphalt-mixing plants that do not employ these specific dryers as up to 30 percent  cold recycled material can go directly into the mixer. This effectively means that any plant from the company is capable of utilising that minimum percentage of RAP.

" Our mixer design is entirely different from others as its mixing turns homogeneous within 30 seconds or so. It has also been tested by German institutions. Other than that, we use a computer control system for batching the cement, additives, aggregates and the entire process therefore turns out to be a  thousand times faster with no time lag whatsoever," he said.

Sundaresan said he remains optimistic of the opportunities ahead for the construction and infrastructure sector on the back of several initiatives taken by the Central government in the past few years. For instance, for the initial phase of  Bharatmala Pariyojana Highway Development programme, the government has approved 34,800 km of national highways projects out of 65,000 km, allocating close to 5.4 lakh crore outlay to be utilised in its developments.

Also, the Gati Shakti Master Plan and other infrastructure projects of national importance will also help enhance the demand for construction equipment.  In 2020, the Ammann Group completed the acquisition of its stake in its JV partner Gujarat Apollo Industries. Both companies had initiated their collaboration in 2012.