Annual forum brings together captains of industry and government heads on a common platform to discuss and debate HR challenges and solutions, and ways to achieve the overall goal of thinking global and acting local. 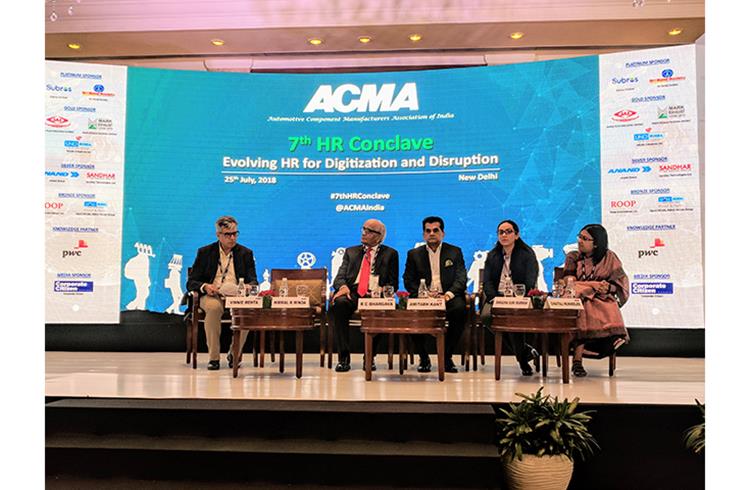 Apex component industry body ACMA today conducted its 7th HR Conclave in New Delhi, with an intent to discuss and debate upcoming challenges and possible solutions with regard to manpower recruitment, human resource management and skill development in the disruptive times.

The Indian auto components industry, which had clocked overall revenues of US$ 14.5 billion (Rs 99,622 crore), is pegged to ride the wave of growth of the Indian automobile sector in general, and touch the US$ 200 billion (13 lakh crore) mark by 2026, going as per the Automotive Mission Plan-2. While automobile sales were at their highest, growing by 14 percent in FY2018, India is one of the strongest accelerating markets globally. Its passenger vehicle (PV) market is set to become the world No. 3 over the next three years with volumes expanding from the current 3 million to around 9 million units. The country is also pegged to be the second largest EV market in the world by 2030, according to a Bloomberg report.

While technology will play an important role in driving this growth, it will also bring along its threats to human manpower deployed inside automotive supplier facilities, be it Tier 1, Tier 2 or even Tier 3 players.

With over half of the present-day job roles set to become redundant and be automated over the next decade, industry captains and their HR pundits are already engaged on how to manage the existing workforce and keep them relevant in a disruptive era.

While technology is foraying into our lives at a tremendous pace, it is also making its way into the automotive sector with modern mobility solutions such as electrification and autonomous driving systems.

Speaking at the conclave, Amitabh Kant, CEO, NITI Aayog, said, “Incremental progress will happen in the future in the EV space and thus, disruption is bound to occur in the conventional auto components sector. So, how the Indian automotive sector evolves will impact and transform its HR processes too.”

With vehicles of the future becoming increasingly digital, shopfloors will also need to adopt these digital technologies in the form of automation, robotisation, IoT and Industry 4.0 at large. “Here’s when HR processes will have to focus on change management with an increasing level of digitisation. People will need to unlearn and re-learn new skills which would now be biased towards data analysis, process management and decision making,” Kant added.

The speakers were of the consensus that what is also making technology percolate down to the automobile assembly lines is the rapidly evolving customer expectations, which is increasingly demanding more personalisation in multiple aspects of a vehicle.

“Digitisation is something which is going on, at least in Maruti Suzuki, since the last 30 years. In today's day and age, it is imperative that all work be digitised at the workplace,” said RC Bhargava, chairman, Maruti Suzuki India.

“India is the fastest growing automotive market in the world and component manufacturers can avail the advantage of this opportunity. New HR practices will count in making that happen”, Bhargava added.

While there are many digital trends, ancillary companies are making a lot of investments into their backbone processes to upgrade their systems. “Achieving the BS IV to BS VI leapfrog within a short span of time is not possible without technological upgrade even at the process level. This regulatory jump is also one of the challenges in front of the Indian automotive components industry in the short-term and we are working towards fulfilling it,” said Nirmal K Minda, president, ACMA.

“This, in turn, calls for quicker processes which is possible only through technology,” added Chaitali Mukherjee, partner, People and Organisation, PricewaterhouseCoopers India, speaking at the conclave.

“With the auto industry thriving on new product development, people who are ready to learn and have contemporary technical capabilities are very well suited for the workplaces of the future. Self-awareness and the courage to think big are just some of the qualities which would be valuable in an employee in the coming times. On the other hand, a company's systems need to be agile in order to make an agile workforce feel empowered in a workplace,” Mukherjee said.

When East trumps the West

With concepts such as total quality management (TQM) and Six Sigma taking birth in Japan, Bhargava added, “We have learnt from Japan and other Asian countries that it is teamwork which holds the highest accord than any sort of individual brilliance. Teamwork has been the mantra of Maruti's success, now the question is whether the component manufacturers have been able to reach such levels of collaborative effort.”

“The culture of working in a team is followed in the East more than the West. However, teamwork also needs a much more equitable culture, with no wide disparities among teammates. Hence, we must focus on an equitable system for sustainable growth in the automotive industry in future,” Bhargava remarked.

With both skilled and semi-skilled workforce needing to undergo a transformation of skill sets in the times to come, Kant said, “Really top-class digital talent in India is scarce. As we move towards blockchain, AI and big data, it will be challenging for organisations to get the right competencies. Capabilities will be required to drive the future as this is a paradigm shift in the making.”

“India is deeply committed to the INDC target of Paris, wherein we have committed to decrease upto 35 percent of our levels in 2005. Today, 69GW of our power is being generated through renewable sources and we aim to take it to 170GW by 2020. With this low-cost power, we intend to make EVs a value proposition and the future will see two-wheelers and three-wheelers moving to electrics, while larger mobility solutions will move to LNG and CNG,” concluded Kant.

While humans will continue to have substantial roles to play in the future including those in conceptualisation and product design, it is the mundane jobs which would be replaced by technology and automation. As India heads strongly towards becoming a global hub, HR heads in companies, though, will have to have the right kind of mindset to think global and act local.