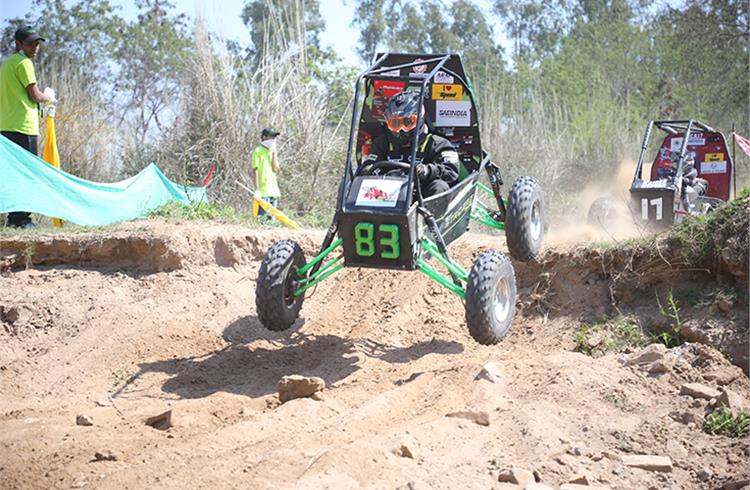 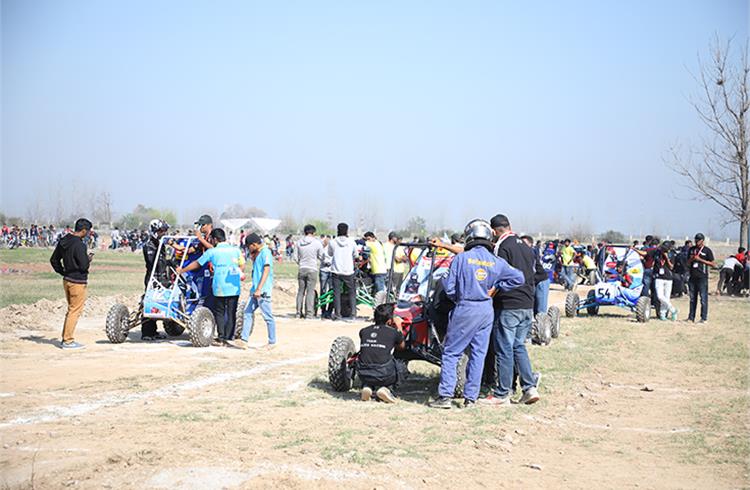 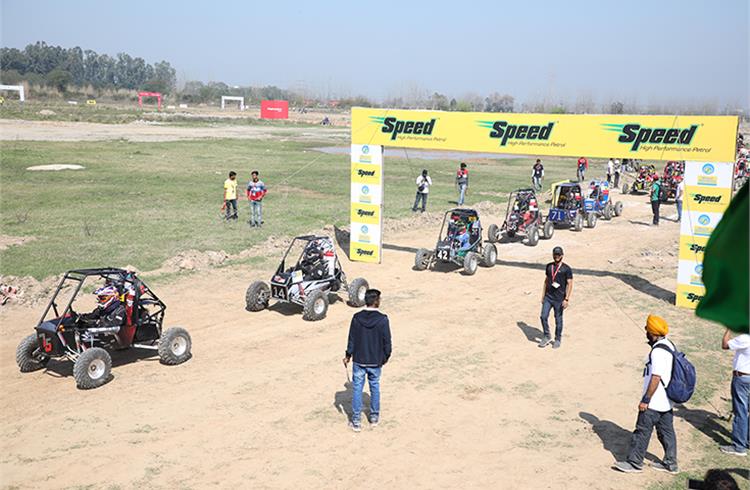 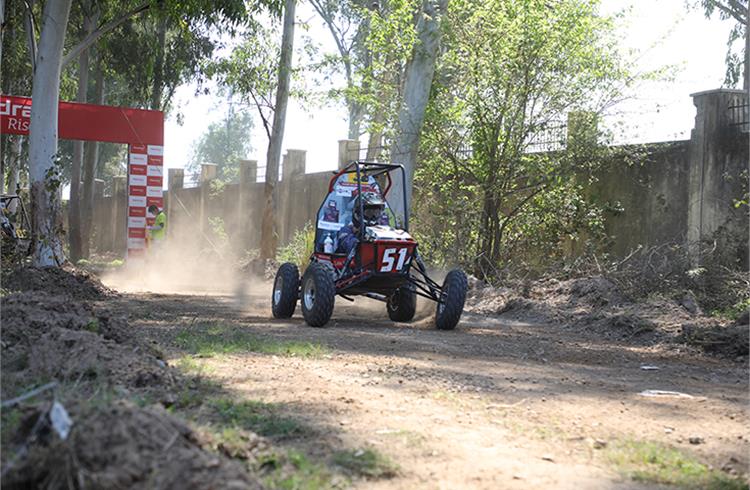 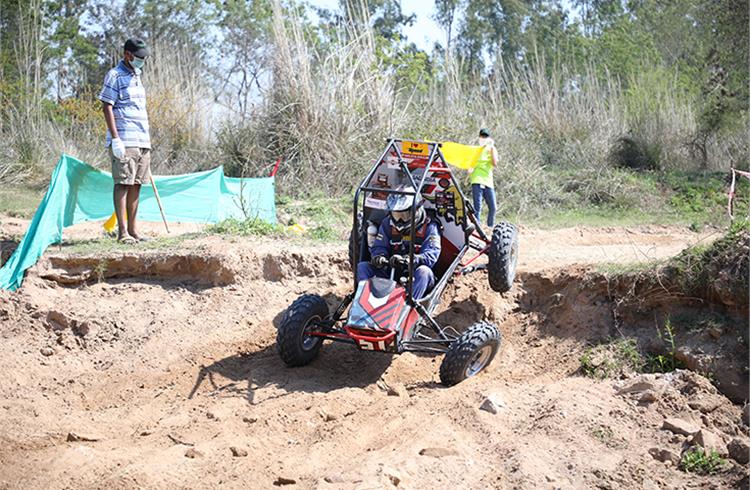 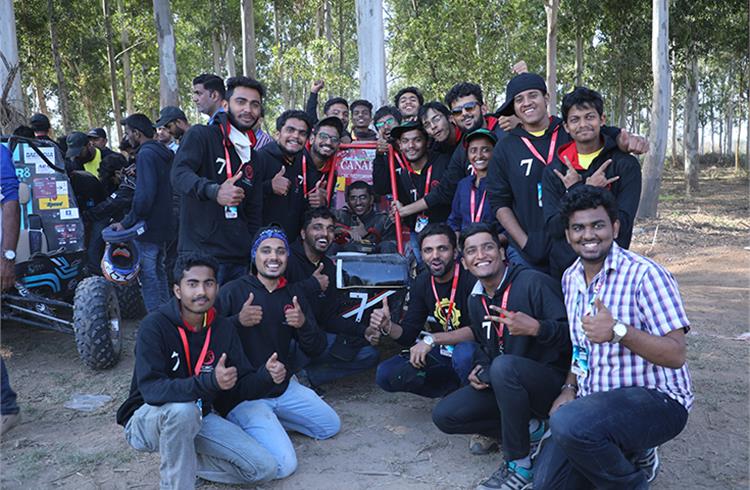 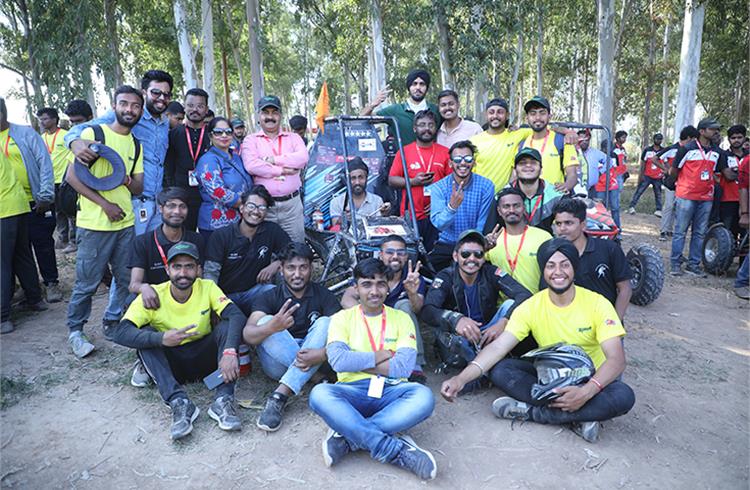 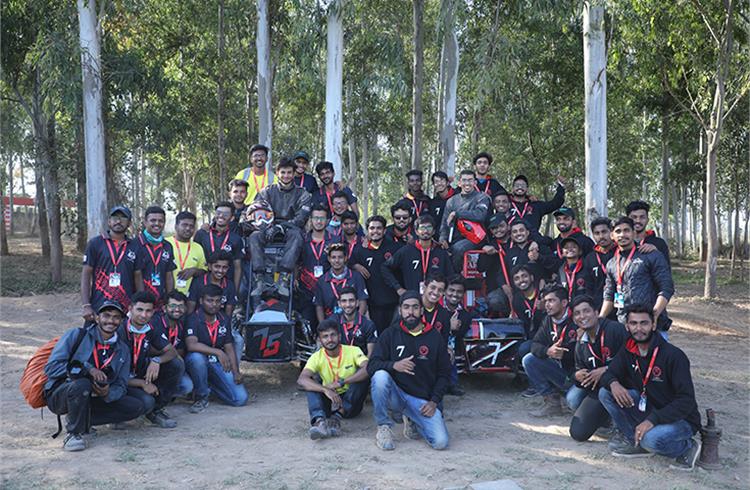 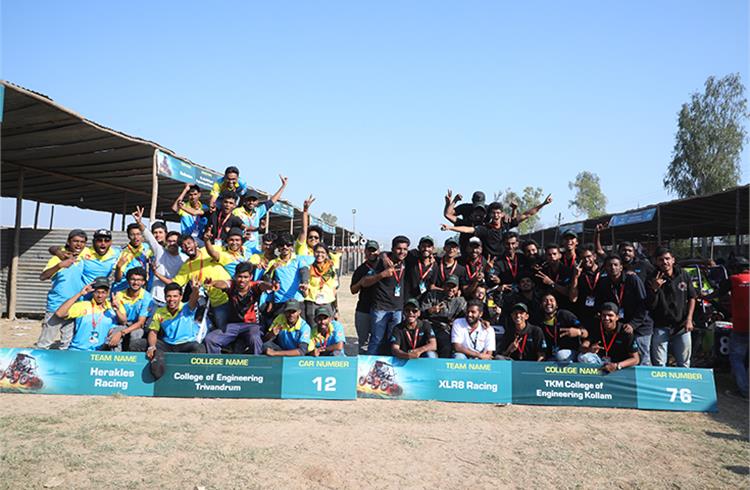 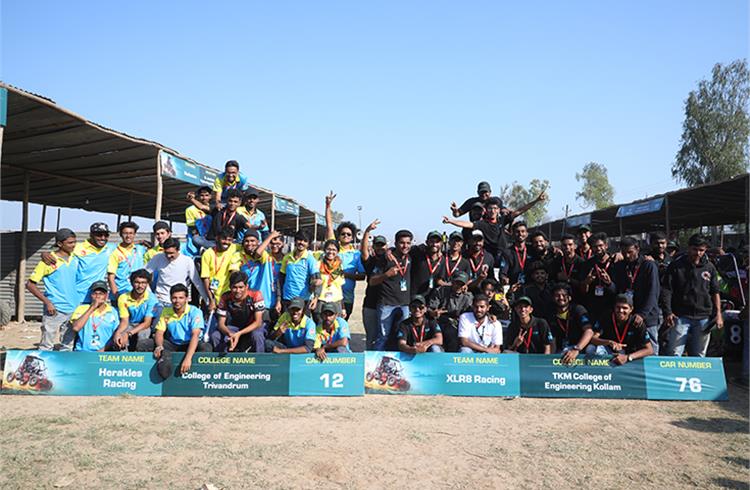 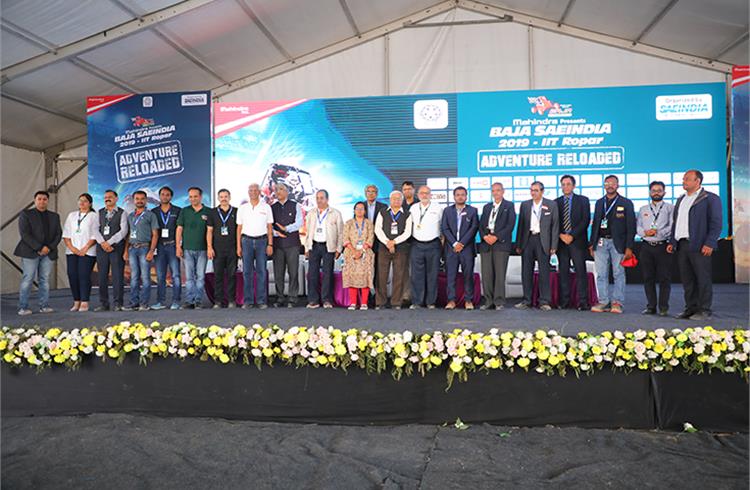 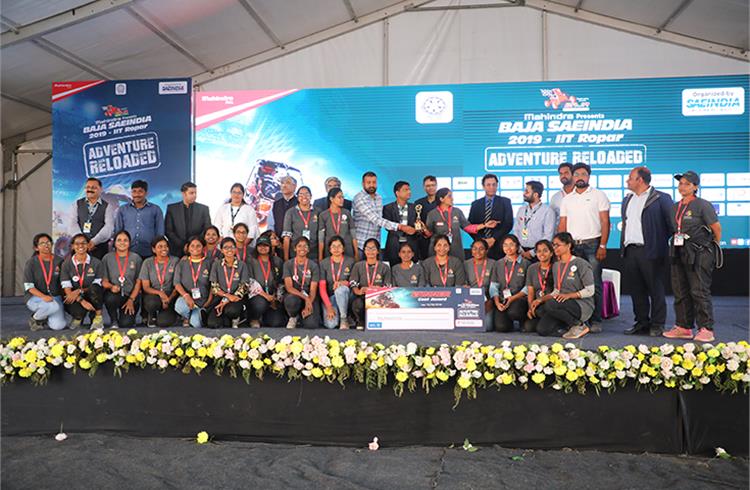 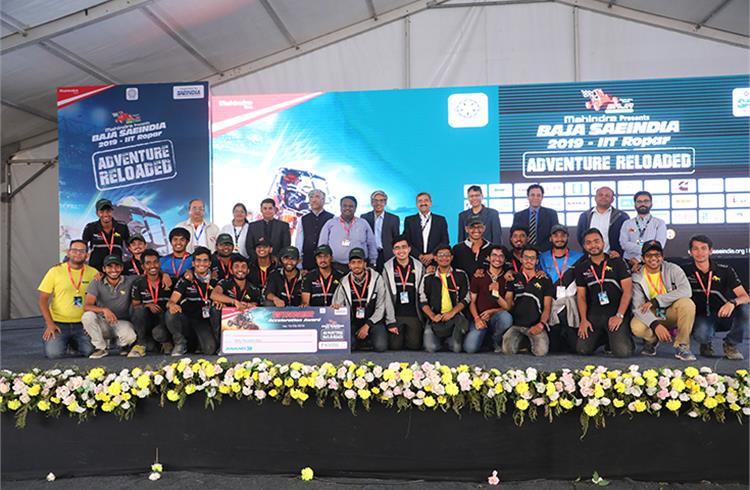 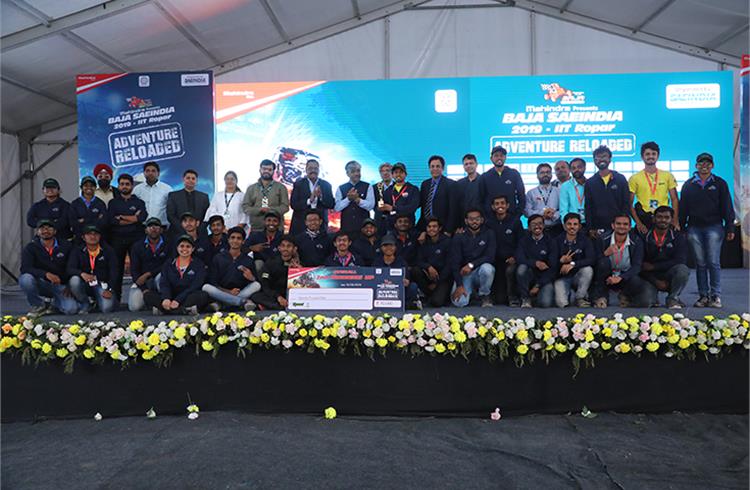 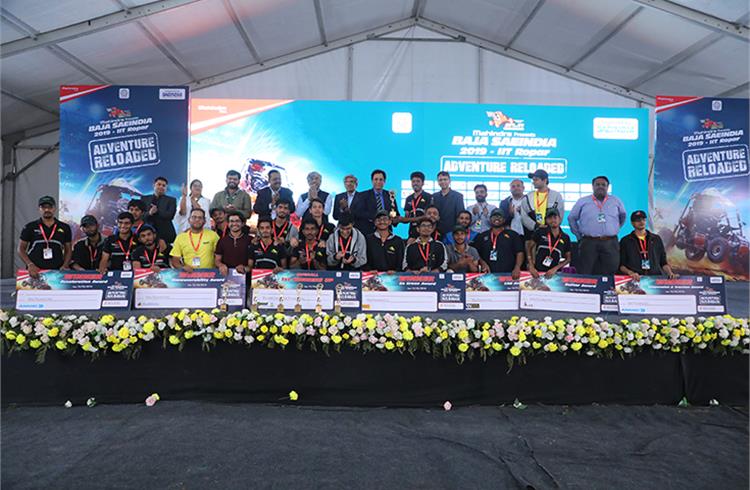 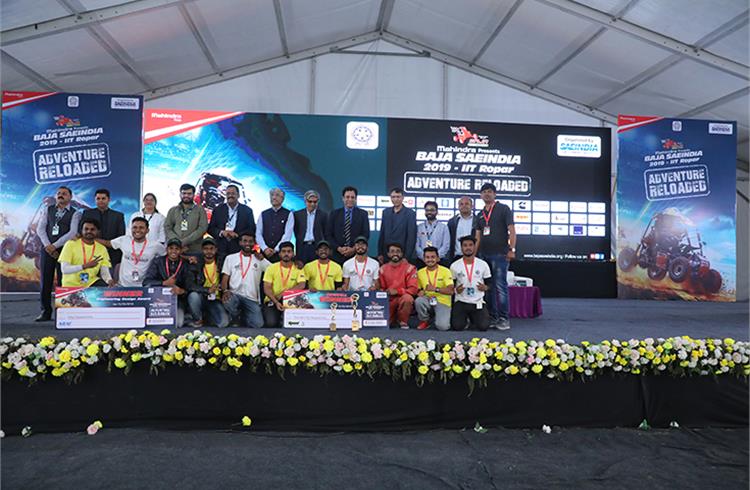 The second leg of Mahindra Baja SAE India 2019 which was the 12th edition of the event in the country saw an exhilarating culmination with 46 vehicles that contested against each other at the endurance race held at IIT Ropar, Punjab. Out of the 81 teams, 46 teams qualified through the evaluation test before being eligible to take the grid position for the endurance race.

Out of the total 4,250 students, 363 students registered for the 12th edition, of which, 251 participated in the Pithampur event (1st leg) and 81 participated in the IIT Ropar event. Out of the 81 vehicles, 46 raced through the 2.98km track that consisted of muddy pits, cliffs and slopes of 15-20 feet of height. At the end of the four-hour endurance race where the winner was announced on the basis of the number of laps completed, only 26 vehicles survived the four-hour onslaught. 20 vehicles suffered irreparable damage that deemed them unfit for completing the race. It could be definitely said that the second leg of 2019 Mahindra Baja SAE India 2019 was one of the fastest and the most crash-laden event.

Sandip Institute Of Engineering and Management College, from Nashik, Maharashtra was announced the winner of this BAJA series in India and it took away a cash prize of Rs 250,000 while Rashtreeya Vidyalaya College of Engineering from Bengaluru was declared as the first runners-up, and it received Rs 125,000 as the cash price.

To promote sustainability and skilling, SAE India also conducts separate competition called ‘Go Green Award’ and ‘Skill Baja’ under Baja SAE India. Nine teams were evaluated for Go Green award out of which the team from Rashtreeya Vidyalaya College of Engineering Bengaluru, Karnataka won in this category. 24 entries were received for Skill Baja, out of which, four participant teams were shortlisted in tasks like welding, cutting, grinding and profiling. The team from Rajarambapu Institute of Technology, Maharashtra was declared the winner in this category.

Various other awards to the teams for static events were also presented. Dr Jayaraman from Dr Mahalingam College of Engineering and Technology, Tamil Nadu got the unique Dronacharaya Award, which is meant for the mentors (faculty members) who helped students to make their ATVs. The 'Pride of Punjab (Punjab & Chandigarh)' award was awarded to Sant Longowal Institute of Engineering and Technology, Sangrur, Punjab. The only all-girls team from Shri Vishnu College of Engineering, Andhra Pradesh won 'Cost Evaluation' award for the lowest cost of making Baja Buggy at Rs 282,000.

The four-day event started with basic static evaluation round which comprised of design evaluation, cost evaluation and marketing presentation. In the final round, the teams showcased their prototype of a rugged single seat, off-road recreational four-wheel vehicle and were evaluated on various parameters, including engineering design, CAE, cost and technology innovation.

The objective of the competition was to simulate real-world engineering design projects and their related challenges. Each team’s goal was to create a safe, easily transported, easily maintained and fun to drive prototype without any direct involvement from professional fabricators.

However, the teams were free to design their transmissions with the only restriction being the speed limit to 60kph. The ‘Dynamic Evaluation Round’ tested the vehicles for acceleration, sledge pull, manoeuvrability and suspension & traction. ‘Durability Evaluation Round’ saw the vehicles undergo endurance tests of four hours of BAJA. The ‘Endurance Event’ assessed each vehicle’s ability to operate continuously and at a speed over rough terrain containing obstacles in any weather conditions.

Dr Pawan Goenka, managing director, Mahindra & Mahindra said, “The BAJA SAE India is a one of its kind initiative which enables engineering students to apply what they have learnt within a practical space. With innovation being a key enabler, it is very heartening to note the role played by IIT Ropar in furthering the cause of our upcoming and future engineers. The fact that BAJA SAE India has grown to include the second leg at Ropar is a testimony to not only the competition but also of the institution’s capabilities within automobile engineering”.

Baja SAE India: Bridging the gap between industry and academia