ZF and German Research Centre for AI and partners to showcase Industry 4.0 project

The joint development of an Industry 4.0 basic system for ideal production equipment productivity, includes total of 15 cooperation partners from the industry, science and research segments. 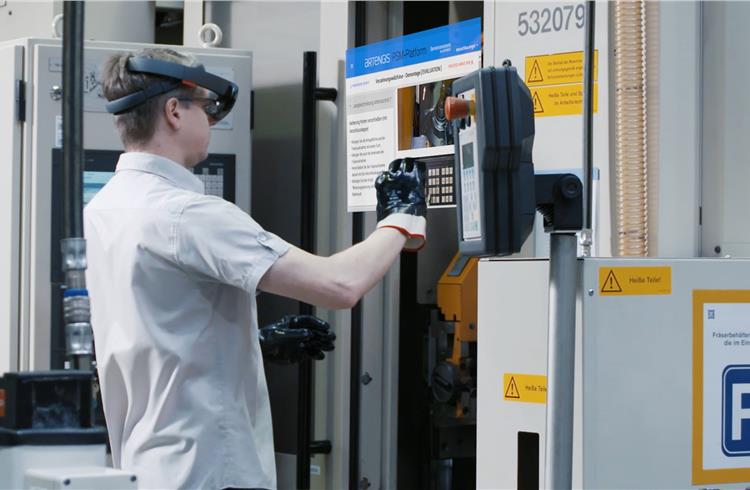 German component major, ZF Friedrichshafen, the German Research Centre for Artificial Intelligence (DFKI) and their cooperation partners will present an infrastructure solution that will contribute towards optimising production equipment productivity – the Industry 4.0 basic system, at the CeBIT 2018.

The project will be presented using an assembling station demonstrator at the Federal Ministry of Education and Research trade fair booth, which has sponsored the three-year project with funds totalling Euro 12 million (Rs 91 crore).

The partners have developed a basic system for production equipment that networks and integrates existing technologies in such a way that allows the realisation of Industry 4.0 applications. "In accordance with the 'Plug-and-Produce' principle, this basic system is able to determine, supplement, re-arrange and immediately execute the abilities of other equipment," explains Werner Balandat, Head of Production Management at ZF. The objective is to eventually offer the basic system as open source software on the market via the non-profit Eclipse Foundation organisation.

Efficient Production Network
Thanks to BaSys 4.0, the production processes can be quickly adapted when introducing a new product so that all purchased items are automatically and promptly made available. The utilisation of assistance systems in assembly and networking into production results in tangible advantages for the plant employees. Planning processes can be virtually simulated in 3D and missing functions are automatically identified by the system.

Furthermore, the basic system permits virtual commissioning where conversions can be tested in a digital twin while the real production continues without impairment. ZF states that one benefit of this is the reduction of downtimes, thanks to a simple scalable software engineering-based networking of hardware components with the overall system, the product and process changes are simplified and visualised.

The demonstrator at the trade fair booth of the Federal Ministry of Education and Research represents an assembling station, the technology of which was developed together with the DFKI at ZF's Saarbrucken location. The industrial automation specialist Festo as well as the Technical University of Munich-based Fortiss company that deals with research and development in the field of digital technology are also heavily involved in the project. Thanks to the basic system which is integrated in the demonstrator, the hardware components are better networked with the overall system, meaning that changes in the production process are easier to implement.

"In the course of the fourth industrial revolution, producing companies such as ZF must be ready for ever-faster market changes, new competition and increasing variety of versions. With BaSys 4.0, we are able to respond to these requirements in Production and optimise our productivity," emphasised Dr. Hermann Becker, Head of the ZF Saarbrucken location.