Commonising cartridge batteries and recharging systems for BEV mini-commercial vans and BEV light-duty trucks will reduce the cost of commercial BEVs and encourage their widespread use. 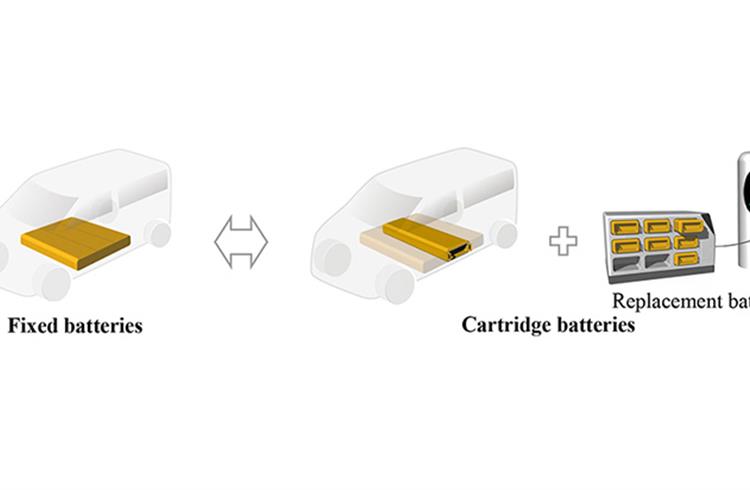 Yamato Transport Co and Commercial Japan Partnership Technologies Corporation (CJPT) have announced today that they will begin studying the standardisation and commercialisation of replaceable and rechargeable cartridge batteries as part of energy management efforts for achieving a carbon neutral society.

The introduction of commercial battery electric vehicles (BEVs) poses several challenges, including recharging times that are longer than refuelling times for conventional petrol and diesel vehicles, as well as increased logistics downtime (when vehicles and cargo are at a standstill) due to numerous vehicles recharging at or around the same time. The introduction of commercial BEVs is also expected to impose an increasing burden on society as a whole, such as by increasing peak electricity demand at business sites due to concentrated recharging by numerous non-operating vehicles.

To solve these issues, Yamato Transport and CJPT are to begin studying the practical application of detachable and portable cartridge batteries based on their following merits.

Able to reduce the cost of BEV introduction: The cost can be reduced by limiting battery capacity―and, thus, the total amount of batteries―to match actual driving-range needs.

Able to reduce the recharging burden: The burden related to the installation of recharging infrastructure can be reduced.

Furthermore, CJPT intends to advance plans for commercial BEVs that cartridge batteries can power. The company envisions that commonising cartridge batteries and recharging systems for vehicles ranging from BEV mini-commercial vans to BEV light-duty trucks will reduce the cost of commercial BEVs and encourage their widespread use. As an energy-management solution, the company seeks to propose ways to achieve battery use that matches actual use requirements.

Meanwhile, Yamato Transport aims to build a green delivery eco-system that includes its transport and delivery partners by co-creating with communities a cartridge battery-based electricity utilisation scheme. In addition to promoting the use of green power by eliminating the gap between renewable energy generation peaks and the timing of recharging commercial BEVs, the company also intends to study ways to increase the resilience of electric energy supply communities, such as by delivering cartridge batteries in times of disaster to areas where it is difficult to maintain electric power infrastructure.

The two companies are open to considering collaboration with new partners for the standardization and commercialisation of cartridge batteries toward popularising electrified vehicles en route to a carbon-neutral society.