Yamaha packs the best leading-edge technology into the flagship YZF-R1 and YZF-R1M models to meet the needs of developed-market customers who also seek track performance. 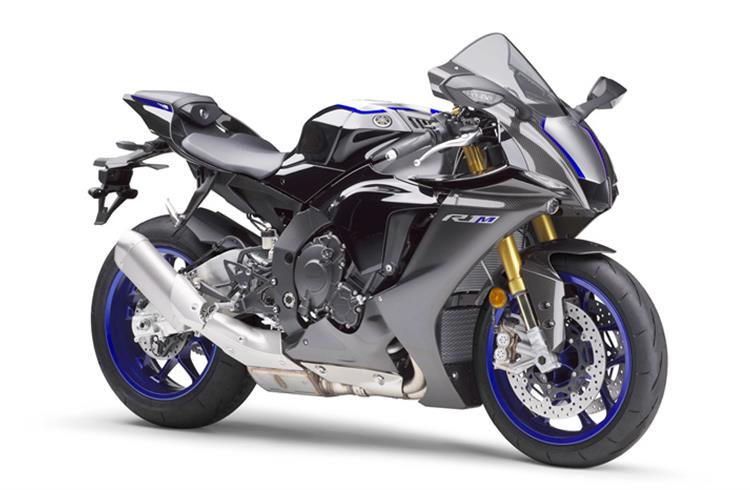 Yamaha Motor Co has confirmed that its updated flagship supersport YZF-R1 and premium YZF-R1M models for Europe will be launched in September 2019. Both models are powered by liquid-cooled, four-stroke, four-valve, in-line, four-cylinder 998cc engines featuring a crossplane crankshaft. Launch of the YZF-R1 and the YZF-R1M in Japan is planned for end-2020.

In the first full year of launch in the EU, Yamaha is targeting sales of 2,100 units of the YSF-R1 and 600 units of the YZF-R1M. Prices will be announced closer to the launch date.

Both the YZF-R1 and the YZF-R1M were developed with the aim of providing performance to dominate circuit racing via its high-level control of abundant, surging power. New features on the two bikes include an advanced and enhanced crossplane engine meeting Euro 5 emissions standards, YCC-T incorporating APSG, front and rear suspension setup focused on improved roadholding, an electronic control system with two new additional features, a newly-designed fairing with enhanced aerodynamics, and LED dual headlights emphasising the next-generation ‘R’ design.

The premium YZF-R1M model includes electronically-controlled suspension and a carbon lightweight fairing, as well as an interface that records a range of useful racing information. 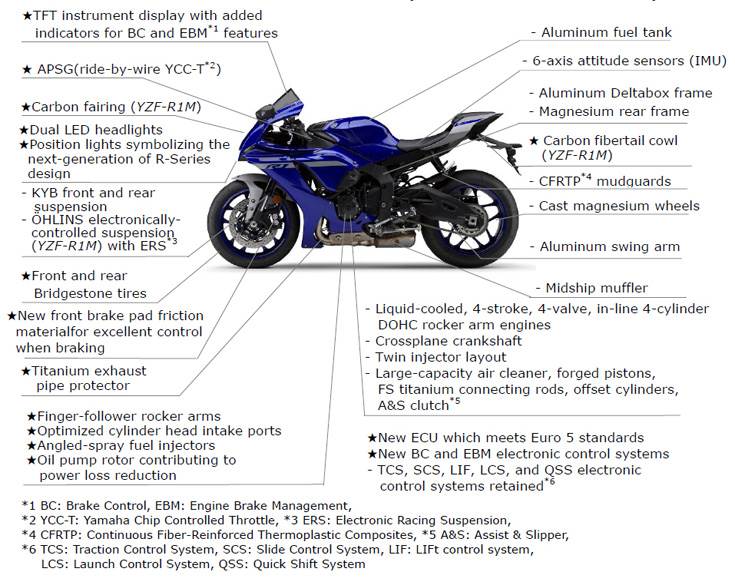 All the new features in the two models detailed above are marked with *
Here's looking at the updates in more detail:

Euro 5 engine gets further honed performance: The 998cc engine now has a more advanced combustion system featuring new cylinder heads and injectors. The new cylinder heads were developed in order to reduce the distance between the combustion chamber and throttle valves. In addition, new model injectors have been adopted for angled delivery directed to the rear of the valve head. 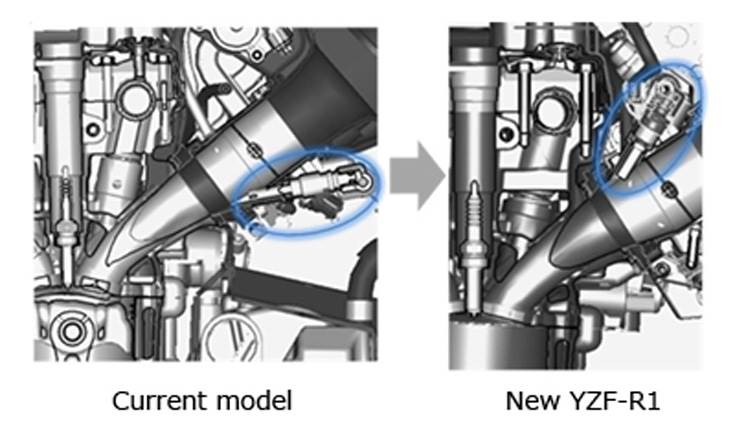 These improvements optimise combustion speed in the low to moderate rpm range, improving the feeling of linearity from the moment the throttle is opened, and making the sensation of torque even more apparent. The twin-injector layout, in which additional secondary injectors activate at high rpm, has been retained.

Valve train uses new finger-follower rocker arms: The engine’s finger rocker arm valve system has been advanced and enhanced. The arm shape has been revised to improve valve motion characteristics in the higher rpm range. Working toward even higher rpm ranges for racing situations, this initiative has successfully raised the baseline of performance on the limit. 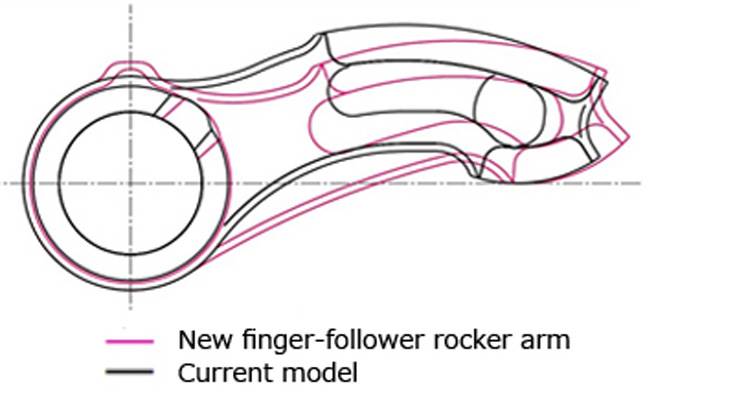 Advanced lubrication system: To prevent oil pressure drops at higher rpm ranges and reduce horsepower loss through oil stirring, the ‘centre oil feed method’, similar to that of the current model, is used in oil supply to the connecting rod big ends. By optimising the oil supply volume to the connecting rod big ends, crankshaft journals, and piston coolers, the 2020 model has even lower horsepower loss through oil stirring in the crankcase at high rpm ranges.

The YZF-R1M also enhances the ongoing ERS (Electronic Racing Suspension) system – which integrates control of the front and rear suspension – through the addition of gas cylinders to the front suspension. Cavitation is restricted through gas pressurisation to 0.6Mpa, contributing to stabilisation of the damping force.

Electronic control system with two new additional features: In addition to the electronic control systems in the previous model, two new types of systems – EBM (Engine Brake Management) and BC (Brake Control) – have been added to support the rider in accordance with their preferences and the riding conditions. The individual control systems are linked to support the rider and efficiently bring out the machine’s full potential. To make the most of the new control systems, the display functions of the TFT 4.2-inch instrument panel have been revised, and selection of the YRC (Yamaha Ride Control) mode enables even more advanced reflection of rider preferences.

Newly-designed fairing with enhanced aerodynamics: The fairing shape has been completely redesigned from the previous model to achieve advanced aerodynamic efficiency. Notably, the fairing completely shelters the rider in a racer tuck position, controlling airflow at speed, and improving wind resistance by 5.3 percent. At the same time, the exterior design has been revamped to highlight the next-generation ‘R’ design. 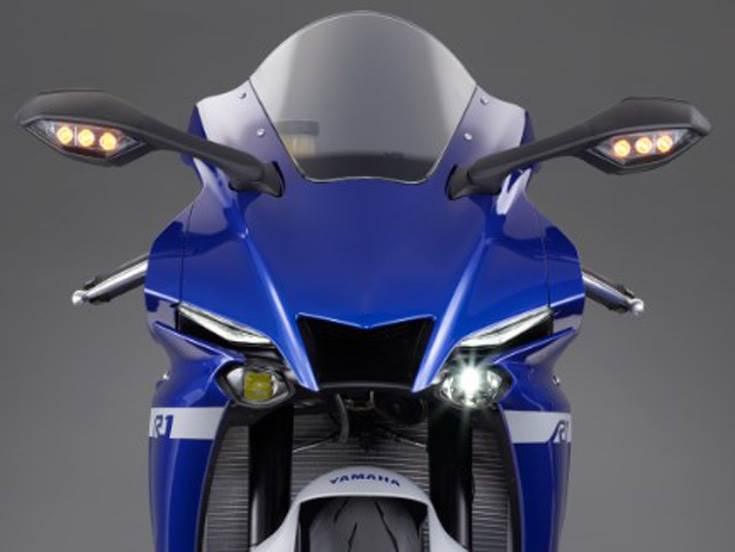 LED dual headlights: The new models feature lightweight, newly-designed, compact LED dual headlights. Light projection has been optimised for both low and high beam, with significant improvements made to the light coverage area in low beam. In addition, the combination with the newly-designed position lights creates a frontal view which encapsulates the next-generation ‘R’ design 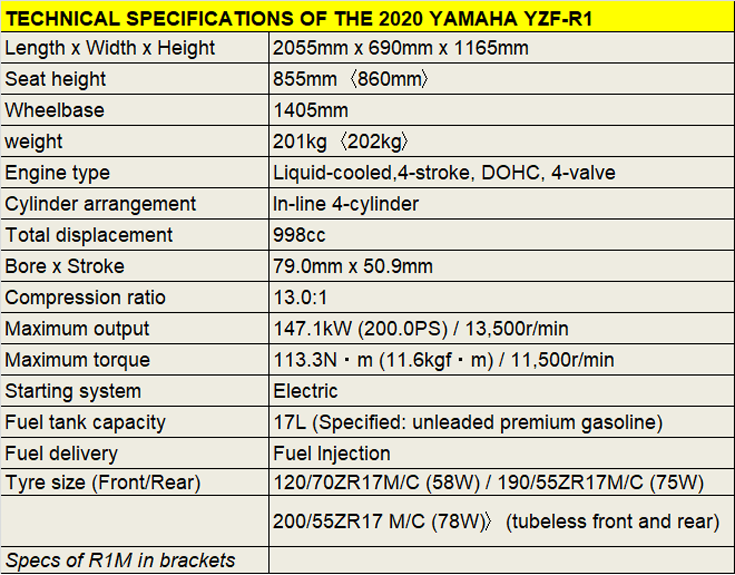